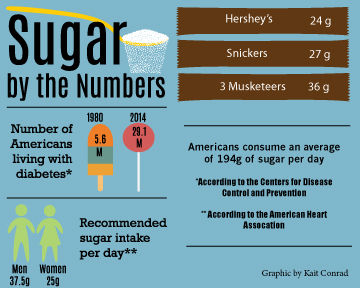 Trick-or-treaters and Americans alike have another sugar-oriented day, National Candy Day, to look forward to. However, sugary treats can be addictive, often leading to disease.

Sugar and cocaine addiction are very similar, activating the same areas of the brain, according to a May article posted by The Huffington Post.

Chad Drake, an assistant professor in psychology, said this is a logical conclusion.

“It doesn’t really surprise me that sugar lights up areas of the brain that are similar to that for other drugs,” said Drake, who has been published in the Addiction Research and Theory journal. “Those are reward, pleasure centers of the brain. I don’t know why anyone would have expected them to be different.”

“There’s two pretty good reasons why people get trapped in some kind of addiction, whether its cocaine or food or whatever,” he said. “It can be an escape from bad things and an approach toward good things. It can be both and they’re not necessarily the same thing.”

Drake said addiction is difficult to resolve, and explanations for addiction can vary.

“Generally speaking, some people don’t have a whole lot to look for in life and this is the one thing that is reliably good to them,” he said. “I think everyone struggles and has ways of coping with those things, and some people get sort of locked into coping with consumption.”

Though it may be addictive, sugar is not entirely bad.

“Our body fuels itself on sugar, that’s where we get our energy,” she said. “Sugar is not bad for you if it is consumed in moderation, as with everything. It’s all about how we consume it.”

“If we would eat more whole foods to satisfy the sweetness that we crave versus a Snickers everyday at 2 p.m., we’d be better off,” she said.

“I think it’s obvious that we are getting our candy,” she said. “Most people are getting their candy or their sweet every day.”

Green said obesity and diabetes are on the rise, especially in children.

“Our kids are having adult onset diseases like Type 2 diabetes, cardiovascular disease, hypertension,” she said. “If we would not necessarily eliminate but reduce the amount of those highly processed, sweetened foods we could reduce some of those risks.

The number of Americans with diabetes has increased more than 400 percent since 1980, from 5.6 million to 29.1 million Americans, according to the Centers for Disease Control and Prevention.

The American Heart Association recommends a maximum of 37.5 grams of added sugar per day for men, and 25 grams of sugar for women. Eating one candy bar a day could account for nearly all the recommended sugar for both men and women.

Students have varying habits when it comes to eating candy.

“I’m really into fitness and health and I try to watch what I eat more,” he said. “I like candy, it’s good, but I don’t eat it often.”

Micah Gray, a senior from Chicago studying radio-television, said he is not surprised that sugar and cocaine are similarly addictive.

“It’s definitely addictive, especially if you get too much of it,” he said. “It can be highly addictive. Too much of a good thing can be a bad thing. … So I have no reason to believe it can’t be as harmful as cocaine.”

Gray said he enjoys candy, but eats it rarely.

“I heard candy isn’t good for you, but it tastes really good so I’m kind of stuck in the middle. I don’t know what to believe,” he said.