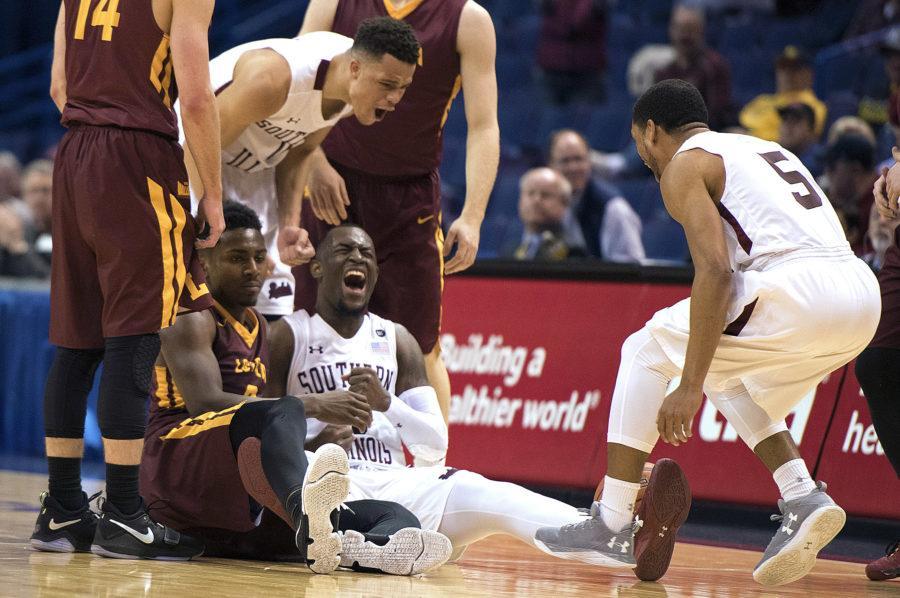 SIU men’s basketball is now one win away from the Missouri Valley Conference Championship game after beating Loyola in the quarterfinals on Friday.

The Salukis have now beat the Ramblers three times in three meetings, this time a 55-50 victory sending them to the semi-final game of the MVC tournament.

A few plays later, after junior guard Donte Ingram made pair of free throws, the Salukis went on a 5-0 run to give them a 34-25 cushion.

The Ramblers didn’t give up and quickly went on a 7-0 run to cut the lead to just two points with 9:09 remaining.

Southern countered the run as senior guard Leo Vincent found junior forward Thik Bol under the rim for an emphatic dunk that sparked a 5-0 run.

Then Vincent made a 3-pointer at the tail end of a 6-0 run that put SIU back on top by 10 points.

That was the major run needed to secure the Salukis’ victory. Loyola didn’t have enough time to amount a comeback and eventually fell 55-50 to SIU for the third time this season.

Southern held the Ramblers to 27.3 percent shooting from the field on the game.

“We told [the team] all along, I guarantee them, if we hold them under 39 percent, we would win the game,” coach Barry Hinson said.” Man we tried to give it away at the end, but my guarantee came out right.”

Senior guard Sean O’Brien (12.4 points per game) noticeably struggled to score the ball. He had two points on 1-8 shooting.

“Offensively, we’re going to have to step up because they’re going to do everything they can do to stop Sean O’Brien, and they did,” Hinson said. “The problem with Sean today was his back was locking up.”

The Ramblers scored on back-to-back 3-pointers for the first baskets of the game.

Lloyd scored the Salukis’ first two baskets of the game, making the score 6-4.

The Philadelphia native made some big plays in the first half that ultimately kept SIU in the game. He scored nine of his 14 points and also tallied four steals in the half.

“I just wanted to win,” Lloyd said. “You got to make winning lays in order to win.”

Lloyd’s four steals led the way for some great defense for the Salukis in the first half as they forced the Ramblers to commit 14 turnovers and 27.3 percent from the field.

“At the end of the day, if you hold teams to 27 percent, you have a really good chance of winning,” senior guard Mike Rodriguez said.

The teams traded baskets until hometown kid freshmen guard Aaron Cook was subbed in and got a steal which led to lay-up that tied the game at eight.

Richardson immediately responded with a 3-pointer that put Loyola back on top.

He was a thorn in the Salukis’ side all night as he led the Ramblers in scoring with 16 points.

The Ramblers leading scorer, senior guard Milton Doyle (15.5 points per game), was held to five points on 1-9 shooting by Lloyd who was assigned to guard him.

“If Sean Lloyd can hold the First Team Milton Doyle to five points, he doesn’t have to finish all of his shots.” Hinson said.

Loyola was only able to push its lead out to as many as five points.

At the end of the half, Southern went on a 4-0 run to bring themselves within one point.

After Loyola split a pair of free throws, Lloyd made a jumpshot that tied the game at 20. Then senior guard Leo Vincent made a 3-pointer to give SIU a 23-20 lead going into halftime.

The Salukis play at 2:30 Saturday against Illinois State in semi-finals back in the Scottrade Center.

“We’re going to have to play the same level of defense,” O’Brien said. “Illinois State [is] really talented. They are a hell of a defensive team — probably the best in the Valley — so we’re going to have to be really sharp offensively, a lot shaper than we were today.”