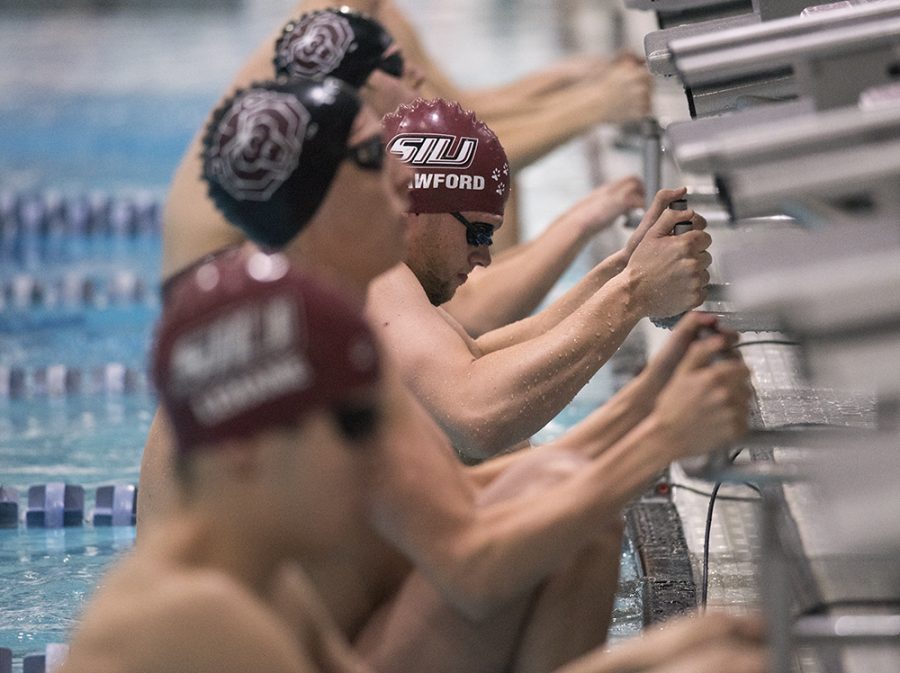 Junior Alex Crawford braces before the start of the 200-yard backstroke race Saturday, Dec. 3, 2016, during the Saluki men's team's 195-93 loss to Missouri State at Edward J. Shea Natatorium. Crawford finished in fourth place with a time of 1:53.84. (Morgan Timms | @Morgan_Timms)

Seven schools compete in the 2017 MAC Championship in a total of twenty-one individual and team events.

Day 1 of the 2017 MAC Championship consisted of the 200-yard Medley Relay and the 800-yard Freestyle Relay.

“For us to come out that fired up and that kind of fast — not bad at all,” said coach Rick Walker. “We had the second or third fastest backstroke, second fastest breaststroke, second fastest fly and the fastest freestyle leg of anybody in any other relay. I think they’re ready to go … they got some speed, and I’m very excited about that.”

SIU finished the night with sophomore Reilly Garman, freshman Kevin Kluge, junior Michael Wolfe, and senior Filippo Dell’Olio teaming up for the 800-yard Freestyle Relay. The Saluki swimmers would finish this event with a time of 6:39.04 to take fifth place.

“I think these guys [800-yard Freestyle Relay team] did a great job holding their own and not actually letting it get away from them,” said Walker. “Great splits, and good for them that they got that swim in, because we will be ready to go tomorrow and the days to come.”