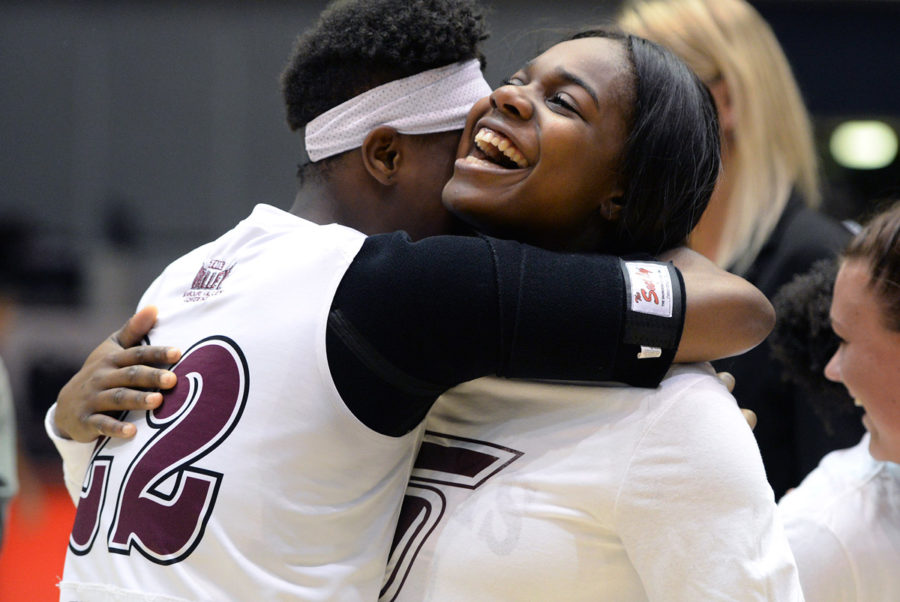 Freshman guard/forward Tiajaney Hawkins hugs senior forward Kim Nebo on Sunday, Feb. 26, 2017, after SIU’s 69-63 win over Bradley at SIU Arena. Nebo, who was recognized as one of the team's senior players after the game, scored 14 points and grabbed 10 rebounds in her last home game. (Luke Nozicka | @lukenozicka)

SIU women’s basketball gave seniors a last hurrah at SIU Arena when the Salukis beat Bradley 69-63 during their last home game of the season.

“I felt like our seniors were ready to play,” coach Cindy Stein said. “They really helped lead the way … It’s pretty much just great leadership by them that really pulled us through.”

After leading by as much as 16 easy on, the game got tight in the final minutes.

The Braves fouled Southern twice and made both pairs of free throws — junior guard Danielle Brewer made another 3-pointer with 20 seconds remaining.

That was too little to late as Corrigan made two more free throws for SIU, sealing a 69-63 win.

“They were going to do everything they can to get back into this game,” Stein said.

Junior guard Kylie Giebelhausen scored the first baskets of the game for the Salukis, an and-one layup that put SIU up by three.

Southern continued its success in the second as they pushed their lead to 11 when senior forward Corrigan made a 3-pointer, making the score 31-20.

Corrigan’s 3-pointer also sparked a 6-0 run that put SIU firmly in control of the game.

But thanks to a free throw made by Giebelhausen and a midrange jumper by Napier, the Salukis went into halftime with a 41-30 advantage.

“We battled,” Stein said. “I think that’s the biggest thing, and they make you battle. If you don’t battle they’re going to take over.”

At the start of the third, teams traded baskets until Bradly went on a 5-0 run — cutting the deficit to just six.

But then Nebo got a big offensive rebound and scored immediately, which stopped the run and started a 4-0 run by the Salukis.

The rest of the quarter was a boxing match as the teams scored back and forth. SIU went into the fourth with a 43-33 advantage.

The Salukis play their next game at 6 p.m. Thursday against Indiana State in Terre Haute, Indiana.