Student Center ballrooms fill for kings and queens of drag 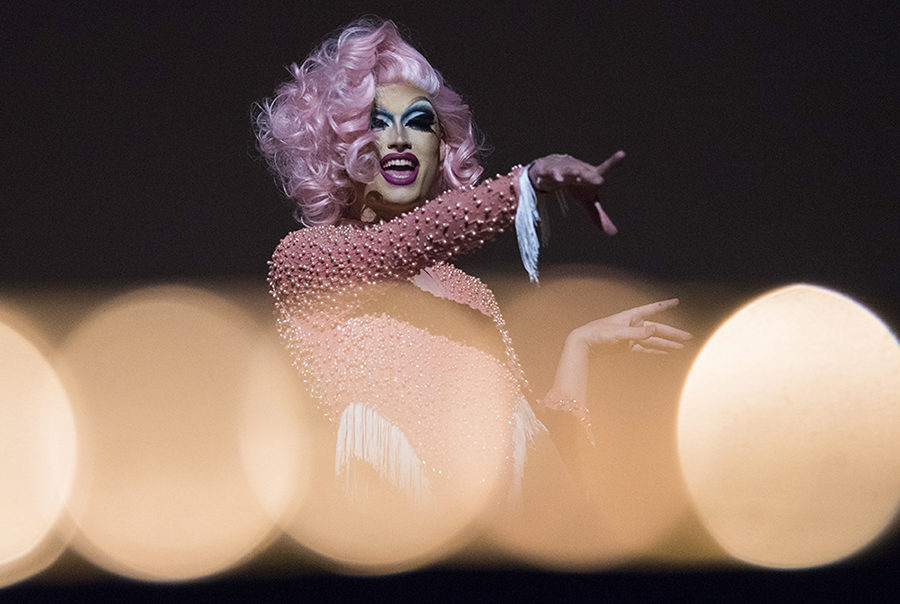 Peyton Kross, of Little Rock, Arkansas, points to the crowd while in the character of Lady Boi on Saturday, Feb. 25, 2017, during the Golden Gays Drag show in the Student Center. "Honestly drag has really helped me figure out who I am as a person," Kross said. "With any gay kid growing up, you struggle with being too feminine or too this or too that. Drag has really put into perspective that yes, I have feminine qualities, but that doesn't make me wrong or sinful. So drag has really just given me this incredible creative outlet. It's performance, it's music, it's fashion, it's hairstyling - all these things that I love so much and I found a way to bring them together." (Morgan Timms | @Morgan_Timms)

Da’Veon Coria Burtin’s glitter eyeshadow shimmered in the spotlight as he strutted across the stage.

The 21-year-old from Chicago, who performs drag under the stage name Rain Garnette Moore Foxx, kissed friends and fans as they handed him dollar bills and howled in excitement.

The show, put on by the Saluki Rainbow Network, brought in a full house Saturday night to the Student Center ballrooms, where people of all ages danced and raved while the drag queens and kings grooved to upbeat music.

Burtin said drag has helped pull him out of depression. After eight failed suicide attempts over his lifetime, he said he now “has the confidence to carry on everyday life because of drag.”

“Before I felt like I always had to defend myself,” he said. “I thought the easy way out would be just to die.”

After starting drag two years ago, Burtin said he no longer has suicidal thoughts. Doing the shows, he said, “shows him how to be his inner-self.”

For Burtin, revealing Rain meant arriving nearly three hours before the show to paint his face with makeup and put on his fishnet tights and heels in the bathroom across the hall from the ballrooms.

“I’m a social butterfly, so drag came really natural to me,” Burtin said. “I just want my audience to be happy.”

Hostess Julie Socorro announced the queens and kings of the night while members of the audience swarmed the catwalk. After they were announced, the performers strided onto the stage, shaking their hips and lip synching to pop music.

Fans shrieked as Socorro introduced Kara Belle, a drag queen from Champaign. Belle said her 15-year drag career started in Carbondale after a dare from a friend.

“Drag and the real world are so different, but I’ve learned so many life lessons.” Belle said.

Socorro, who has performed under the name Faim Lee Jawls for 12 years, also introduced four amateurs, including Jaye Schmidt, a junior from Champaign studying psychology.

Schmidt took the stage with Socorro, the woman who inspired her love of drag. Schmidt said at her first drag show, she saw Socorro perform and was brought to tears.

Schmidt said since starting drag, she feels more open about identifying as queer, despite years of bullying.