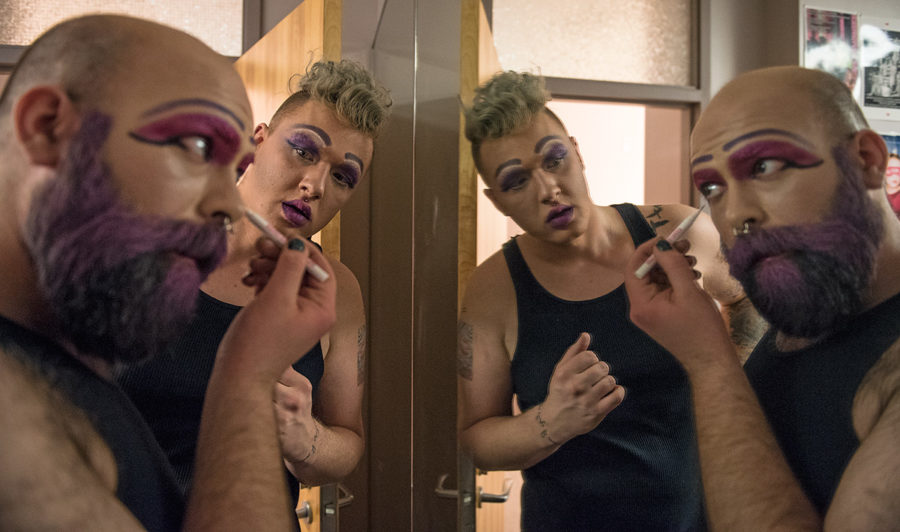 Greg Hummel and Alex Davenport, both doctoral students in communication studies from Ashland, Pennsylvania and Sterling, Virginia respectively, prepare their makeup before going onstage for a rehearsal of “In Service of Venus” on Wednesday, Feb. 22, 2017, in the Marion Kleinau Theatre in the Communications Building. “[The production] deals with love, it deals with dating in the online world, it deals with working in the service industry and finding connections between those things,” said Anna Wilcoxen, who wrote, performed in and co-directed the production. She said the play is “more of a psychological show” as opposed to a linear narrative. The play can been viewed at 8 p.m. Feb. 23, 24 and 25 in the Marion Kleinau Theatre. (Jacob Wiegand | @jawiegandphoto)

The lives of service workers and society’s perception of value tie together in the production “In Service of Venus,” which is showing from 8 to 10 p.m. Thursday, Friday and Saturday in the Marion Kleinau Theatre.

The story follows the concept of  being “worthy” in society, and questions the importance of net worth and material possessions. It also examines the portrayal of the female body and how that ties into women’s level of respect for their careers and love lives.

“I like for audiences to make inferences on their own, I don’t want to present a moral,” said Anna Wilcoxen, director and writer of the production.

Wilcoxen, a graduate doctorate student, said she first started writing her own material in 2007 when she enrolled in performance studies at SIU. She went on to present her first stage play, “Meat my Package,” three years later.

Wilcoxen said she found a connection within the service industry and with dating and that’s how she tied the topic of the female body into her show. She said the connection was a matter of disposables, how important looks are in both industries.

“I spent many years working in the service industries and knew I wanted to write something about some of the experiences,” Wilcoxen said.

Wilcoxen said creating this show required not only a lot of hard work, but also pouring her heart, soul and emotions  into the project to get the best result. She said she wants people to have fun, but she also wants them to walk away asking questions about what they saw.

“There’s something magical about the theatre where everything just works out,” Wilcoxen said. “Working together, trusting each other and coming together as a community is how you make a successful show.”

Campus reporter Diamond Jones can be reached at [email protected], 618-536-3325 or on Twitter @_dimewrites.