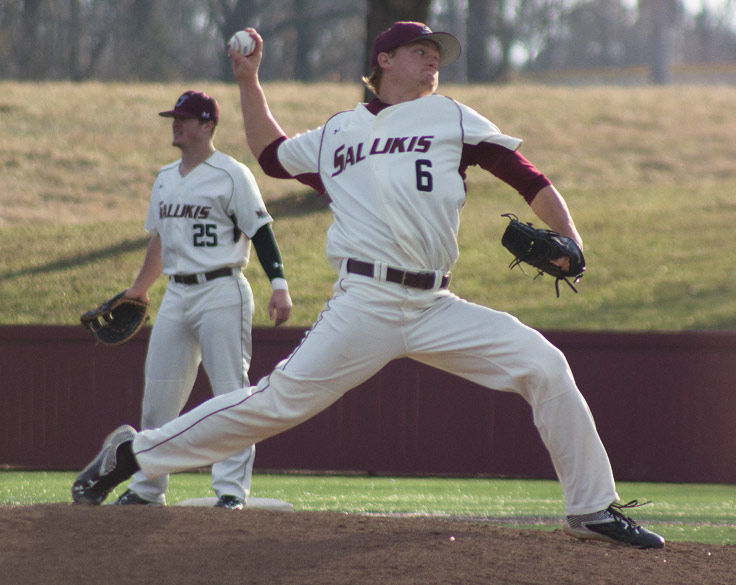 Ryan Netemeyer warms up during SIU's 4-1 win against Western Illinois on May 7, 2016, at Itchy Jones Stadium.

The Salukis held off Stetson’s rally in the final three innings Friday to win their season opener 7-6.

The Hatters scored four of their seven runs in the final three innings of the game — two of which came in the ninth.

Sophomore first baseman Mike Spooner doubled down the right field line, advancing Sidwell to third and bringing Hale in to score, making it 7-5 with a runner at third with no outs.

Netemeyer composed himself and struck out the next two Stetson batters. He threw a wild pitch that advanced Spooner to third and brought Sidwell in to score.

The junior from Belleville pulled it together and finished off the game by striking out Lightner for the Salukis first win of the season, earning the save.

The first inning was uneventful but in the second both teams scored two runs.

Saluki junior catcher Nick Hutchins and senior third baseman Ryan Sabo were hit by pitches and ended up at second and third base.

Junior second baseman Connor Kopach doubled down the line bringing both Hutchins and Sabo home to put the Salukis up 2-0.

At the bottom of the second a Stetson got on base early and after a double by Lightner they got on the board too, Lightner was also brought in home after a single by center fielder Jacob Koos tied the score at two.

SIU was able to retake the lead in the fifth inning after a throwing error and a walk got two Salukis on base. After Hutchin’s double and senior shortstop Will Farmer’s single the Salukis were up 5-2.

Things didn’t get eventful again until the seventh inning when Hutchins crushed a two-man home run, putting them up 7-4.

The Hatters didn’t leave this inning empty-handed as Hale was able to get on base and was eventually brought in to score by Sidwell.