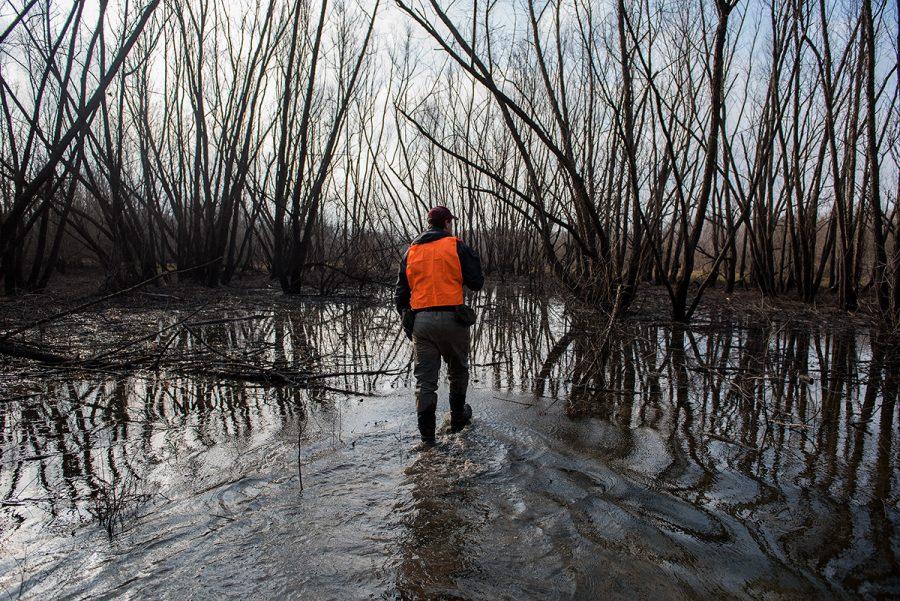 John O'Connell, a Ph.D. candidate in zoology from Miami, traverses wetlands Sunday, Feb. 12, 2017, off Illinois Route 3 near Gale. The Cooperative Wildlife Research Laboratory, through which O'Connell conducts his wetland research, could be at risk of losing $507,388 in funding if the university doesn't receive state appropriations by July 1. "I imagine if funding is cut that that's going to impact the number of students and maybe the number of faculty that we have," he said. "We lost quite a few students last year because their projects were funded and their assistantships were funded through federal money that was blocked because of the failure of the state to pass a budget that authorized the spending of that money." He said the different academic departments that use the lab overlap and mingle, and that the sharing of information in the lab is a way to collaborate and further their research. (Jacob Wiegand | @jawiegandphoto)

SIU’s Cooperative Wildlife Research Laboratory could close after 67 years of supporting undergraduate and graduate projects if Illinois does not pass a budget by July.

Under a set of proposals outlined by the university’s non-academic prioritization committee, the research laboratory could lose $507,388 from its budget. Matt Whiles, who has worked as the laboratory’s interim director for about three years, said their budget totals $509,672 in state appropriations, nearly all of which pays salaries.

If those cuts were implemented, the laboratory that has existed at SIU since 1950 would shut down, Whiles said. This would dramatically strip students of collaborative, hands-on research experience, he said.

“In years past, SIU has marketed itself as a university where students can come and get hands-on research experience,” said Whiles, a professor at SIU since 2000. “If we cut these centers, we’re cutting what we’re telling the students we’re good at.”

As the university seeks to make budget adjustments that align with a lower level of state support amid Illinois’ historic budget impasse, the wildlife research laboratory is one of 15 institutions or centers the prioritization committee has identified for cutbacks and suggested as becoming self-sustaining.

The Daily Egyptian is publishing a series of stories to examine the effect those proposed cuts would have on the university community if a budget is not passed by July 1. This is the fourth in the series.

By eliminating the laboratory, Whiles said SIU would lose what sets it apart from other institutions in the region.

“I find it hard to believe that SIU could cut research centers that have … really helped define this university,” he said. “Everything we would lose with such a cut would be devastating.”

That kind of reduction in state funding would also likely result in layoffs, Whiles said. Laying off tenured faculty, however, would only occur if the university declared a state of financial exigency, and there have been no indications of such a move.

The laboratory, which houses its main offices on the second floor of Life Science II, consists of Whiles and six faculty members, 23 graduate assistants and 12 student workers. The lab also employs two clerical workers who are shared with the Center for Fisheries, Aquaculture and Aquatic Sciences.

Like directors of other SIU centers that could lose funding, Whiles said the committee’s categorization of the laboratory as non-academic is laughable. He described academics and research as being “intimately intertwined,” saying students learn from and work with professors who produce a majority of the information they learn about in class.

John O’Connell, a doctoral student researching wetland availability throughout Illinois, agreed, saying the field or lab experiences is what will get students employed upon graduation.

“That field learning or learning in the computer lab — that’s what’s going to get you a job in the future, not that memorized something out of a textbook or a lecture,” O’Connell said.

As its name implies, students involved with the laboratory collaborate and work closely with one another, especially the group of graduate students studying zoology, fisheries, forestry and other fields, O’Connell said.

“When we go to national conferences, you run into alumni and everybody’s commenting on how cooperative it was when they were here and how that was vital,” he said. “[The Cooperative Wildlife Research Laboratory is] where we’re really sharing ideas and working together to further our research.”

For example, O’Connell, along with two undergraduate SIU students and researchers from the University of Illinois, collected data Sunday morning east of Cape Girardeau on wetlands available for migratory birds. It was part of O’Connell’s statewide project, and it’s the type of research that drew Alex Bell to SIU.

“If we lost the lab, we would be a lot poorer as an institution,” said Bell, a junior from Columbia studying wildlife biology.

The cut would also extend to the community, Whiles said, because the laboratory conducts research on local, national and international wildlife issues.

Whiles said one faculty member is researching chronic wasting disease, which the Centers for Disease Control and Prevention describes as a contagious neurological disease that can lead to the death of deer, elk and moose.

The laboratory brings in about $1 million a year in grants, Whiles said, but researchers have been unable to access them for the last year and a half because of the state budget stalemate.

O’Connell said many grants come from the U.S. Fish and Wildlife Service, but must first pass through the Illinois Department of Natural Resources, which the state has not authorized.

“If we’re looking at cutting other funding in addition to that other problem we are already facing, that’s going to be really impactful,” he said.

In a previous interview, Judy Marshall, co-chair of the committee that created the report, said the recommended cuts were still being considered. The Chancellor’s Planning and Budget Advisory Council reviewed and prioritized the suggestions before delivering the report to interim Chancellor Brad Colwell on Feb. 1, said university spokeswoman Rae Goldsmith, the committee’s other co-chair.

The committee is scheduled to meet Thursday with Colwell, she said.

Since July 2015, Republican Gov. Bruce Rauner and Democrats who control the state Legislature, including House Speaker Michael Madigan, have failed to come to an agreement on a state spending plan. In light of the state’s historic budget impasse, public universities are considering ways to continue operations with the assumption some funding could be cut permanently.

Two stopgap measures passed through the Legislature in 2016 totaled $83 million in financial support for the SIU system. Those funds, for the most part, were used to pay the bills from the 2016 fiscal year. The university started the 2017 fiscal year “basically back at zero” and is dipping into the reserves once again, SIU President Randy Dunn has said.

These cuts would not be the first implemented in recent years. The 15 institutions or centers suffered a permanent 10 percent reduction in state funding in fiscal year 2016, according to the committee’s report. Others saw additional cuts in fiscal year 2017.