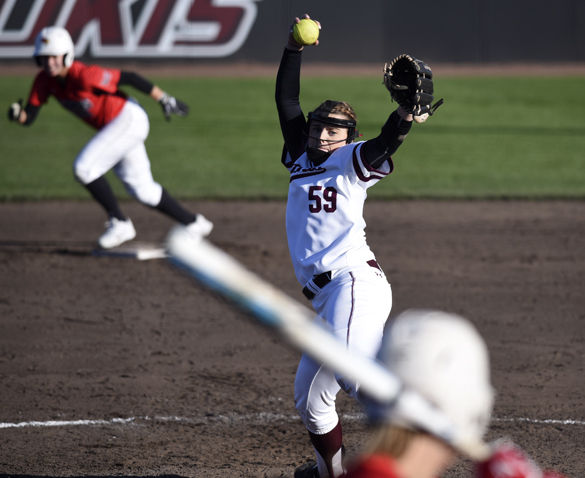 The first weekend of the 2017 softball season is in the books and SIU is coming home with a winning record.

This is Dover’s (2-0, 0.00 ERA) sixth career shutout after earning one on Friday against Coppin State. She struck out nine Black Knights and only walked one in addition to the five hits.

Army (0-3) had very few opportunities to get a run on the board off Dover, going 0-2 with runners in scoring position.

Southern scored all seven runs via its primary tool of the weekend: the home run. Junior infielders Haley Andrus and Sydney Jones as well as senior center fielder Merri Anne Patterson each hit one over the fences Sunday to push the team total to 10 on the season.

Freshman outfielder Susie Baranski led off the Salukis reaching base for the fifth consecutive game and senior first baseman Shaye Harre got her team-high fifth walk before Andrus brought them home with her home run.

In the fourth inning, Jones hit her second solo home run on the weekend to extend the lead to four runs.

Baranski got her second hit of the game in the seventh, then fellow freshman Bailee Pulley drew a walk before Patterson’s homer — her second on the season — scoring the final runs of the game.

Dover then ended the game with some flair, striking out the final two batters.

SIU (3-2) will head out to the southeast again next weekend when Eastern Michigan hosts its tournament in Madeira Beach, Fla. The Salukis will face North Dakota and Alabama-Birmingham, Massachusetts, Michigan State, and Boston University.