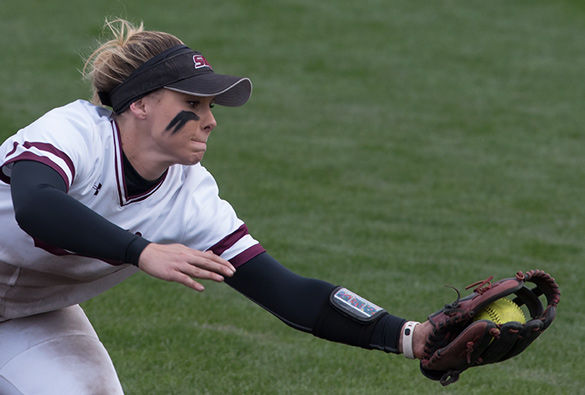 Sophomore utility player Savannah Fisher lunges to catch the ball during the second game of the Salukis’ doubleheader against Loyola on March 19 at Charlotte West Stadium. Fisher had one hit and one RBI in the second game. The Salukis won both games of the doubleheader by scores of 4-3 and 5-0. – March 19, 2016, Carbondale, Ill. (Jacob Wiegand | @JacobWiegand_DE)

Coming off its best season in five years, Saluki softball nearly entered the second day of its 2017 season with a perfect record still intact.

SIU opened its season Tuesday in Hammond, Louisiana, with an extra inning 3-2 heartbreaker against Nevada, but immediately came back with a vengeance in an 11-0 run-rule victory against Coppin State.

Things were initially going well for the Salukis in the first game of the day.

After failing to score a leadoff baserunner for each of the first two innings, senior catcher Jessa Thomas took matters into her own hands by sending the first pitch of the season she saw over the fence to give SIU a 1-0 lead.

Meanwhile, SIU’s sophomore ace Brianna Jones was dealing, allowing only one hit through the first four innings. She saw her first trouble of the game in the fifth, allowing the Wolfpack to load the bases with only one out before working out of the jam.

Junior shortstop Savannah Fisher then started her big night with another solo home run for the Salukis in the top of the sixth, pushing their lead to two.

However, Nevada answered back in the bottom half of the inning as sophomore third baseman Alyssa Mendez hit a two-run homer of her own to tie the game, eventually going into extras.

SIU went down 1-2-3 in its half of the inning, but Nevada won the game after freshman second baseman Maddy Vermejan couldn’t handle a liner from Nevada junior outfielder Erika Hansen, allowing the game-winning run to cross the plate.

The Salukis had little time to shake off the loss before facing Coppin State, but they didn’t need long.

Junior pitcher Savanna Dover sent down the Eagles in order in the top half of the first. Then the Salukis went to work.

Freshman right fielder Susie Baranski led off the inning with a single and senior center fielder Merri Anne Patterson followed with a double. Kentucky transfer third baseman Haley Andrus then earned her first RBIs of her Saluki career with a single to bring the Dawgshome, giving SIU a 2-0 lead.

Another freshman, shortstop Kyleigh Decker, tallied her first career RBI in the second with a sacrifice fly to bring home junior catcher Sydney Jones, who tripled in the prior at-bat.

Even though they had a 3-0 lead, the Saluki bats really came alive in the third.

Vermejan and Andrus both doubled home a run before Fisher, Jones and Decker hit back-to-back-to-back home runs to bring in five more runs and push SIU’s lead to 10 runs.

Meanwhile, Dover was again showing the strength of the Salukis’ pitching corps, rounding out what would become her fifth career shutout. She pitched all five innings, allowing four hits while walking four and striking out two in the win.

SIU will try to continue this success at 11 a.m. Saturday when facing Nicholls State and then Mississippi Valley State at 5 p.m. in the Bayou State.