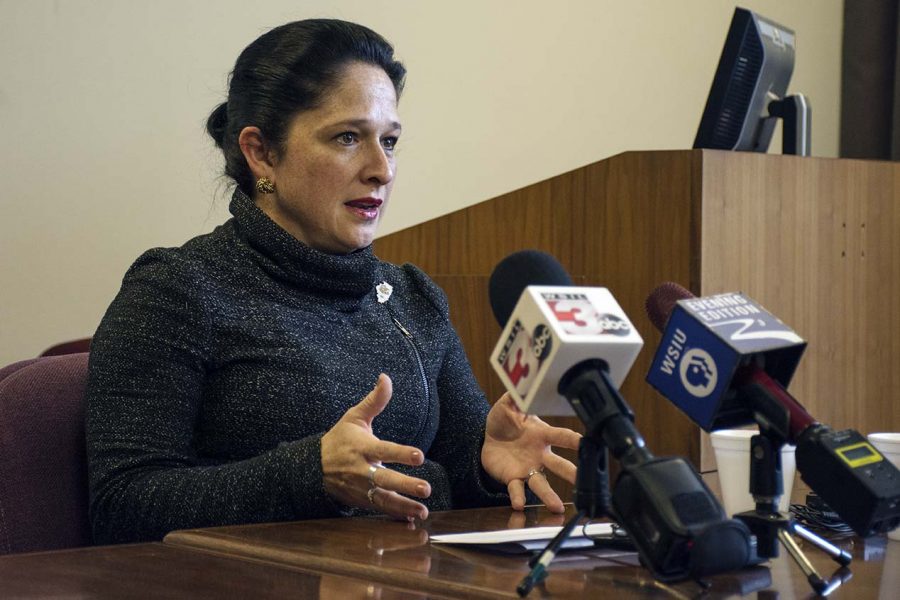 Illinois Comptroller Susana Mendoza on Thursday discussed concerns regarding access to healthcare under the state employee plan, casting blame on the governor for the state’s bill backlog.

Some hospitals and health care centers have reportedly asked those covered under Illinois employee health insurance to pay costs up front because of the state’s $11.2 billion in unpaid bills and the sluggishness of reimbursements. The comptroller traveled to Carbondale to speak with state employees in the university’s Communications Building alongside members of the local press.

The afternoon meeting was attended by roughly a dozen SIU employees and members of the Carbondale community, as they shared stories of struggling to pay health care costs in light of the statewide budget crisis.

Jennifer Wallace, an employee of the Illinois Department of Corrections, was diagnosed with late stage cancer ten years ago. In three months’ time, she said, paying out of pocket might be her only option.

“This is a matter of life or death,” Wallace said. “For some of us, no treatment today could mean death a few weeks away.”

Illinois has been without a budget for more than a year and a half, and has $11.2 billion in unpaid bills. The Illinois General Assembly successfully passed two stopgap budgets since 2015 to keep money flowing to services dependent on state appropriations.

At Thursday’s meeting, Mendoza noted that every day the state continues without a budget, $2 million is added in late payment interest penalties. The comptroller blamed Gov. Bruce Rauner for the budget impasse, suggesting that creating a state spending plan should not be contingent on the wish-list of reforms the governor has pushed since taking office.

She said she is doing all she can with a limited budget and is forced to prioritize spending for social services, which she called “the most vulnerable population of Illinois.”

“You have all of these priorities, some of them are literally life or death,” Mendoza said. “I have to make a decision that will mean this person either gets the case for med services that allows them to live or if I don’t then it is very likely this person will die.”

Mendoza said the state could take decades to recover financially when a budget is eventually passed. She said she plans to travel the state and listen to similar stories to act as an advocate for those affected by the impasse.

Staff writer Athena Chrysanthou can be reached at [email protected] or on Twitter @Chrysant1Athena.