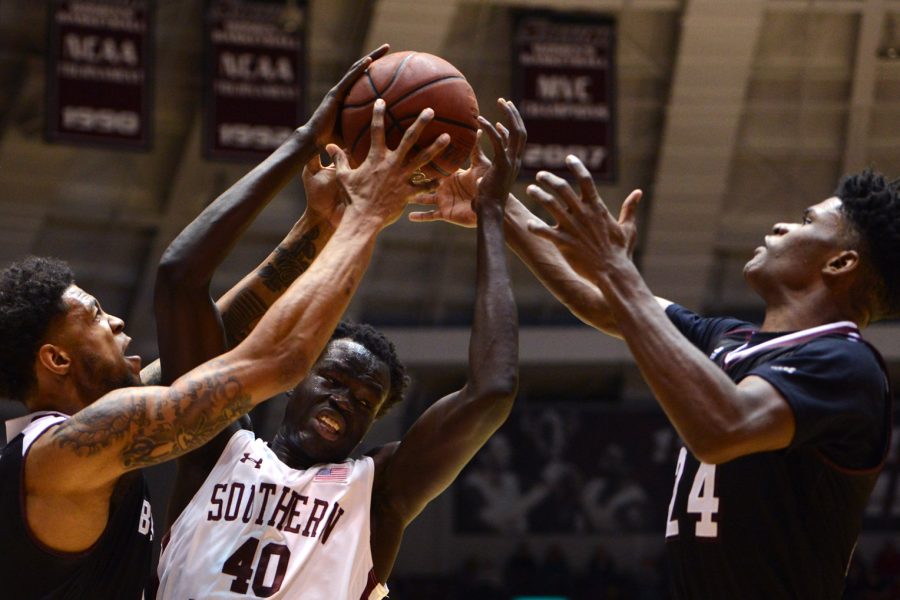 SIU men’s basketball dropped the season series against Northern Iowa on Wednesday in a 49-41 loss.

The Salukis’ 41 point performance was their lowest scoring game of the season, tying for fourth least in program history. The second lowest (39) was against UNI last year.

Northern Iowa scored twice in a row for the first baskets of the game. Junior forward Thik Bol got SIU on the board with a dunk assisted by senior guard Mike Rodriguez.

Later the Dawgs closed the gap with a 17-footer by Bol, bringing the score to 6-8.

The Panthers slowly stretched their lead out — highlighted by a 10-0 run that put UNI up 18-8 with 5:53 remaining.

Even while trailing, the Salukis managed to take care of the ball, only turning it over two times in the half compared to UNI’s 10.

Northern Iowa stayed ahead until SIU cut the lead down to five going into the last media timeout.

Southern couldn’t buy a bucket, shooting 32.3 from the floor, 25 from deep and 50 percent from the free throw line on the game.

Out of the halftime break, UNI put its lead back up to 10, finished off by two made free throws by Koch.

The Panthers controlled the lead for the rest of the game.

Out of the first media timeout of the half senior guard Jordan Ashton made a 3-pointer to gave UNI an 11 point advantage, its biggest of the game.

The Salukis looked as if they would crawl their way back into it when they went on a 6-0 run — capped off with a midrange by senior forward Sean O’Brien — bringing the score to 36-32 with 6:37 remaining.

Northern Iowa was having none of it and immediately went on a run to propel its lead back to 10 with 2:17 remaining.

None of SIU’s players reached double figures in scoring, but senior guard Leo Vincent came the closest, leading with nine points off the bench.

Southern looks to bounce back at 7 p.m on Saturday against Evansville at SIU Arena.