Saluki superfan has not missed a home football, basketball game since 1978 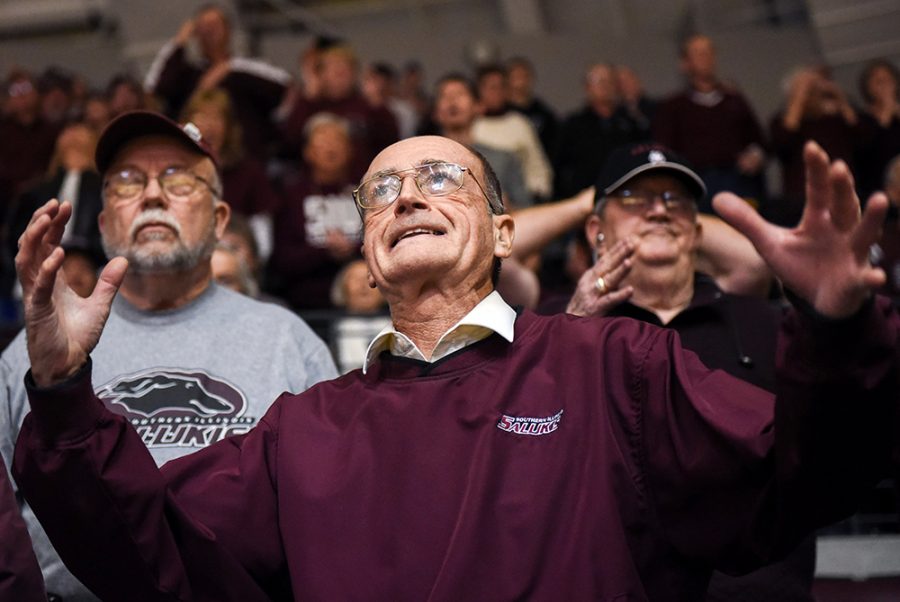 He was back in the stands Feb. 1, cheering on the SIU men’s basketball team for the 533rd consecutive time.

The 64-year-old attended his first SIU game as an eighth grader. Since 1978, Parks has not missed a home men’s basketball or football game. That makes 213 football games.

Parks, who has lived in the Marion area his whole life, was a member of his high school basketball team and as a long-time sports fan, happy to live near one of the only arena’s in the region. He spent two years at John A. Logan College before finishing at SIU with a degree in journalism.

Over the years, weather and unforeseen events have not stopped Parks from attending SIU sporting events.

“I’ve been over here in bad weather you know, snow and ice,” he said. “A few times I didn’t think I’d make it, but I always did.”

Parks has witnessed some of the biggest sporting events in SIU history, including the men’s basketball NIT Championship in 1967 and the 1983 football National Championship.

“Before that championship, Southern was really considered a small college,” he said. “They really propelled in major college status when they won the NIT. Back then winning the NIT was almost the same as winning the NCAA tournament. That was amazing.”

Parks remembered students pulling the goal post out of the football field and marching down Illinois Avenue with it after every home game victory during the 1983 season.

In fall 2015, the Daily Egyptian reported that the lowest season attendance average at Saluki Stadium hit 8,554 in 2013.

Parks said one of the worst Saluki men’s basketball seasons he has witnessed was in the late 1970s.

“They got so bad people would come in [the stadium], they’d bring paper bags, especially students. They’d put them over their heads and watch games,” he said. “I guess they didn’t want anyone else to know they were at the game.”

But even the turbulent seasons didn’t stop Parks from stepping into SIU Arena every year leading up to 2017, his 38th consecutive year in the stands.

One of his favorite players this year? Senior forward Sean O’Brien.

“He’s a horse,” Parks said of the four-year starter. “You can tell he wants to go out a winner.”

Parks said he doesn’t plan on ending his attendance streak any time soon.

When the Dawgs face Evansville on Saturday at SIU arena, Parks will drive up to the arena in his Thunderbird with a license plates reading “SIU 53,” ready to cheer on his Salukis.