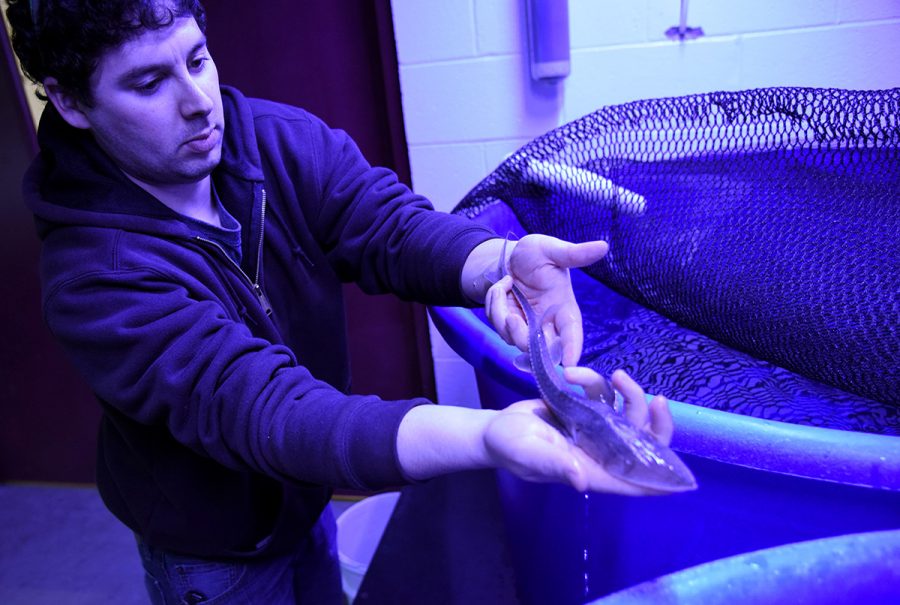 Anthony Porreca, a doctoral student in zoology from Homer Glen, holds a young pallid sturgeon Monday, Jan. 26, 2016, at the McLafferty Annex. The facility has enabled Porreca to research the habitat preferences and reproductive success of pallid sturgeons, an endangered species found in the Mississippi and Missouri rivers that is competing for resources with the overpopulated shovelnose sturgeon. Porreca said the research requires salt and fresh water capabilities and control of minute temperature variances, which were not possible in the previous building. (Morgan Timms | @morgan_timms)

By Marnie Leonard and Olivia Spiers

As an undergraduate student, Anthony Porreca said the state-of-the-art aquaculture facility at SIU “drew his eye in from the beginning.”

“No one has facilities like ours,” Porreca said. “It’s really an essential part to the university.”

Porreca, a third-year doctoral student in zoology from Homer Glen, said he came to SIU from Eastern Illinois University specifically for the research opportunities the fishery center provided. His current research project is studying the endangered ancient pallid sturgeon.

The research that students like Porecca do is generally funded by external research grants. The ability to secure those grants could be at risk if further budget cuts outlined by the university’s non-academic prioritization committee take place.

The Center for Fisheries, Aquaculture and Aquatic Sciences is one of five research institutions slated for cutbacks under a set of proposals outlined by the committee, which was appointed by interim Chancellor Brad Colwell. The committee identified 15 institutions or centers it suggested could become self-sustaining as the university seeks to make budget adjustments that align with a lower level of state support.

The Daily Egyptian is publishing a series of stories to examine the impact those proposed cuts would have on the university community if a budget is not passed by July 1. This is the third in the series.

Acting director Ed Heist said if university administration were to further cut the center’s budget, they would be “shooting themselves in the foot.”

The center received $581,609 in state funding for the 2017 fiscal year, according to the committee’s report. About half of that budget is earmarked for faculty salaries, Heist said, and could only be eliminated should the university begin laying off tenured professors.

Those actions could only be implemented if the university declared a state of financial exigency, and there have been no indications of such a move.

But Heist said he also took issue with its apparent classification as “non-academic.”

“We’ve cut as much as we possibly can out of our state account and it’s going to start affecting our ability to get grants and to support students,” he said. “It’s going to be affecting the academic program of the university if they cut us any more.”

“Some administrators are all about the tuition dollars,” Heist added. “But I want to be able to sleep at night knowing if we take a student’s tuition dollars, we’re giving them something in return.”

Judy Marshall, co-chair of the committee that created the report, said in earlier interviews the recommended cuts were still being considered. The Chancellor’s Planning and Budget Advisory Council reviewed and prioritized the suggestions before delivering the report to Colwell on Feb. 1, said Rae Goldsmith, the university spokeswoman and the committee’s other co-chair. The committee meets with Colwell on Feb. 16, she said.

Public universities across Illinois are considering ways to continue operations in light of the state’s historic budget impasse and the assumption some funding could be cut permanently.

Two stopgap measures passed through the Legislature in 2016 totaled $83 million in financial support for the SIU system.  Those funds, for the most part, were used to pay the bills from the 2016 fiscal year. The university started the 2017 fiscal year “basically back at zero” and is dipping into the reserves once again, SIU President Randy Dunn said following the release of the report.

The center is home to individual research projects of about 20 graduate students, and zoology faculty members carry out their own projects while overseeing student work. Both graduate and undergraduate students are involved in every project, Heist said.

The other half of the state funding goes to two clerical staff members that are shared with the cooperative wildlife research laboratory. Their duties include hiring, employment paperwork and accounting associated with performing grant-funded research, Heist said.

One additional staff member maintains the McLafferty Annex facility, the old aquaculture facility adjacent to it and Touch of Nature’s 90-pond facility. He said the jobs of these non-faculty staff members would be at risk if the university followed through with the proposed cuts.

The biggest effect, Heist said, would be curtailing the center’s ability to administer its research grants because they need staff to do grant accounting, hiring and hiring to remain in compliance with granting agencies and state law.

Heist said if the budget cuts outlined in the report diminished any of the facilities used to conduct research, the center would be less able to secure grant funding because agencies require proper facilities to carry out the projects.

If research had to be scaled back due to budget cuts, Heist said, it would affect not only the university but the larger community as a whole.

“What we do is not just about the classroom,” Heist said. “It’s the impact you have on the community.”

Andy Coursey, the center’s facilities manager, said the 17,000 square feet of indoor aquatic research space at the center is unheard of in the state.

“The University of Illinois is the flagship university in the state, and they have four ponds,” Coursey said. “They can’t even touch us.”

Coursey manages the ponds at Touch of Nature’s research space, a fifteen minutes drive from the university’s main campus. He allots space to research projects and assists the students, who do a majority of the labor, fish harvesting and feeding and equipment maintenance.

Students also raise bass in the ponds, which are sold to farmers and restaurants as far away as New York and Canada. The money goes back into funding the student research projects, Heist said.

The center employs an aquaculture outreach specialist who works with the aquaculture industry throughout Illinois and surrounding states by helping fish farmers with screening and testing for fish health and sale brokerage, he said.

As state support has “dwindled and dwindled” over the years, Heist said the clerical staff have become increasingly overwhelmed with paperwork and accounting. The remaining office workers are already worried they won’t be able to handle the student employee paperwork workload in April, Heist said.

“Illinois is undergoing a brain drain,” Heist said. “You can’t blame people for looking at other places — it’s depressing, all these cuts.”

In 2016, two faculty members took out-of-state jobs. A new aquaculturist was hired to start in the fall of 2017, Heist said, but the other position is likely to remain unfilled indefinitely.

The vast majority of the center’s money is gained through external grants. Last year, four faculty members brought in $1.8 million, Heist said, and anywhere from 15 to 47.5 percent of grant funding goes back to the university in the form of overhead.

“That helps keep the lights on at the university,” Heist said. “We help pay the power bill.”

If the center’s ability to write grants diminishes, Heist said the returns are likely to decline as well.

“If you just want to take classroom classes, you can go to a community college,” Heist said. “You come to a research university to get involved in research.”