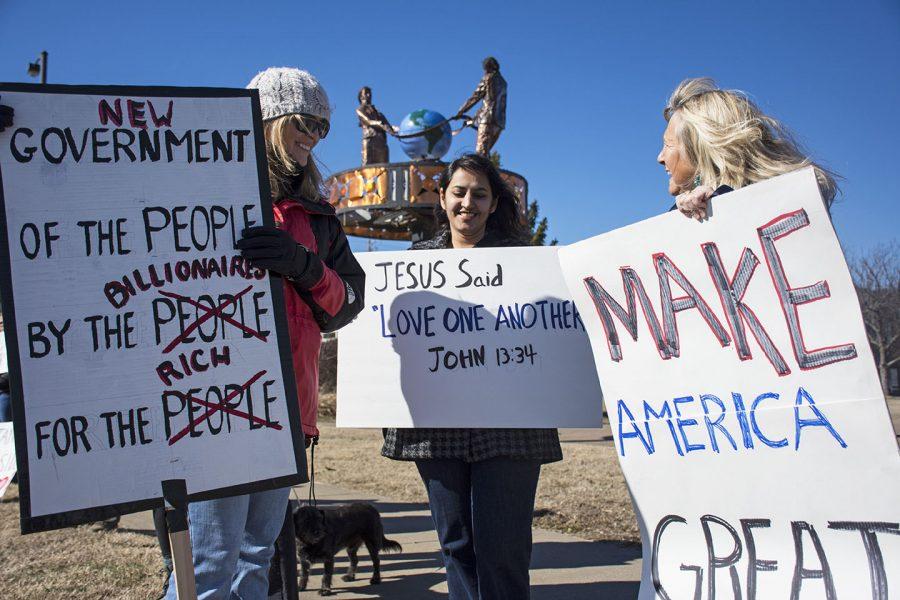 From left: Kitty Juul, of Carbondale, Sana Haque, from Karachi, Pakistan, and Cindy Stall, of Murphysboro, participate in the Peace Coalition of Southern Illinois monthly vigil for justice Saturday, Feb. 4, 2017, on East Main Street. Haque, a graduate student in education, has worked for non-profit education organizations in Washington D.C. and Latin America. Haque was at the vigil to support those who are affected by President Donald Trump’s executive order banning the entry of citizens from seven Muslim-majority nations into the United States. She said she has been asked by members of the SIU community why she cares about the ban if it doesn't directly affect her. “I don't just care about myself,” Haque said. “Iranian students are among the biggest group affected by the ban. If that happened to me, I would want people to stick up for me.” (Athena Chrysanthou | @Chrysant1Athena)

Hours before a federal judge overruled a travel ban for immigrants from seven Muslim-majority countries to the U.S., a Carbondale community group gathered Saturday for a vigil protesting President Donald Trump’s executive order.

Members of the Peace Coalition of Southern Illinois hosted an hourlong vigil for peace and justice at noon at the corner of East Main Street and North Illinois Avenue in protest of the order and a host of other reasons. The coalition meets every month addressing various political and socio-economic issues that affect Carbondale and the nation as a whole.

The executive order issued by Trump during his first week in the White House was met with widespread protests. A federal judge issued a stay on the order and the Department of Homeland Security announced Saturday that those initially affected would be able to resume travel.

The State Department estimated the order impacted travel visas of more than 60,000 people. The Trump administration planned to appeal the judge’s decision.

Sana Haque, an international student from Pakistan, said many people sought to get involved following the Southern Illinois Women’s March, which drew an estimated 800 people to Carbondale in January.

“I’m from a Muslim country and even though it wasn’t among those banned I know of many students affected by this order at SIU,” Haque said.

Signs made by the peace coalition were provided for the participants, who were various ages, nationalities and ethnic backgrounds. Saturday’s vigil touched on other topics such as embracing diversity, racial justice and global warming with placard slogan’s like, “Making America Better” and “Ban Hate, Not Muslims.”

Despite the chilly conditions, a couple dozen demonstrators turned out to rally for the various issues represented through peaceful activism.

“There are people who don’t think about these issues until they see like eight to ten people standing in row on the street carrying a sign,” said Ann Dehorn, a member of the coalition since its inception.

Many families came out as well in support of the vigil, among them Ali Srour and his two children, who were there to protest the president’s executive orders and his plan to build a wall across the U.S.-Mexico border.

“At this time we should be building bridges, not closing ourselves off,” Srour said. “They should open their eyes and see that Islam is not the problem and Mexicans are not a threat.”