Counseling center would have ‘no way to operate’ after proposed cuts, director says 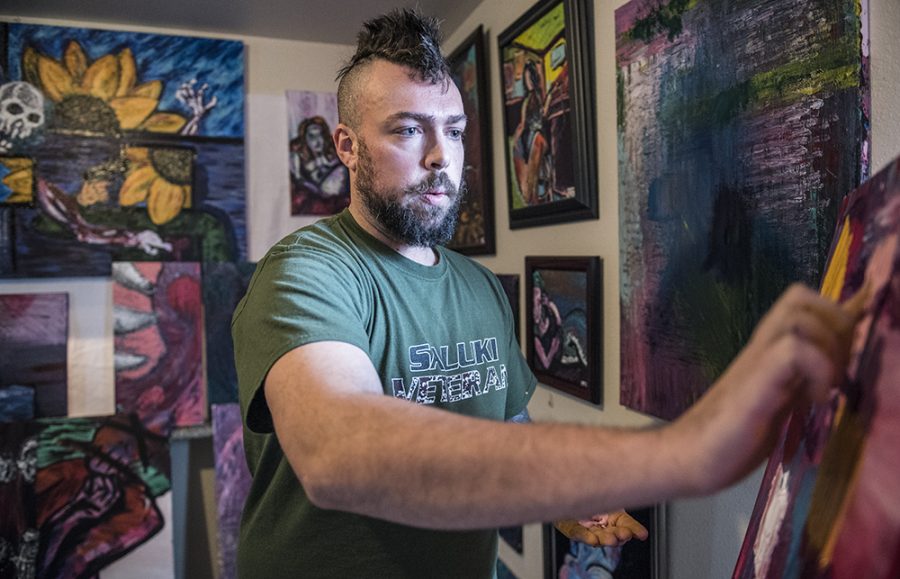 In a living room filled with his artwork, Joshua-Kyle “JK” Brandon, a senior from Buffalo Grove studying psychology, finger paints Tuesday, Jan. 31, 2017, between classes in Carbondale. The Marine veteran sought out SIU's Counselling and Psychological Services after the deaths of his family members and a suicide attempt last year. “[My counselor] helped me ground myself and reminded me that, as a human being, I need to honor all my feelings,” Brandon said. “I was liberated, it really changed me.” (Morgan Timms | @Morgan_Timms)

By Marnie Leonard and Olivia Spiers

Joshua-Kyle “JK” Brandon fell to an all-time low emotionally after his mother and grandmother died during his sophomore year.

The sudden deaths of his family members came after the Marine spent two years in a severe state of depression, often contemplating suicide. He was alone in his Carbondale home when he made the decision to end his life.

“I remember just staring in the mirror and saying, ‘Screw it, just do it,’” Brandon said.

He put a gun against his head and pulled the trigger. It jammed.

Brandon collapsed to the floor before he realized he was still alive. He took it as a sign to get help, and began therapy through the university’s counseling and psychological services. He said he no longer has the desire to die.

“Counseling here has benefited my life more than any college degree will,” said Brandon, a senior from Buffalo Grove studying psychology.

Those services are now at risk.

Counseling and Psychological Services is one of 15 centers or initiatives SIU’s non-academic prioritization committee suggested could be cut off from funding if the university receives no state appropriations by the end of the fiscal year. The Daily Egyptian is publishing a series of stories to examine the impact those proposed cuts would have on the university community. This is the second in this series.

For CAPS, an elimination of state funding would mean a loss of $647,739, according to the report. Jaime Clark, the center’s director, said losing that funding “would be catastrophic” and either force drastic reductions to the services it provides students or introduce an annual student fee.

“There’s just no way to operate without the state money,” Clark said. “That’s our primary source of funding.”

In 2016, the center conducted 10,200 appointments and served about 10 percent of the student population on campus, Clark said. According to a 2016 report from the Midwestern Higher Education Compact, a nonprofit educational research organization, the national average of students seeking therapy on college campuses has been about 10 to 15 percent of the student body over the past seven years.

Clark said the number of students using counseling services has gradually increased over the years, and both the volume of appointments and the severity in mental health issues have grown. That means more students are being seen for suicide attempts, severe depression, post-traumatic stress and anxiety.

Phynix Huhn-Simmons, a freshman from Chicago studying cinematography, started seeing a counselor when she was diagnosed with post-traumatic stress disorder and depression during her sophomore year in high school. When she got to college, she said seeing a therapist became even more important.

“The only way to de-stress is to talk about it,” Huhn-Simmons said. “Who will I have to talk to if this loses funding?”

Recommending these cuts is the the non-academic prioritization committee created by interim Chancellor Brad Colwell to find long-term efficiencies that could save the university money. The committee considered possibilities for savings in all areas of the university, from saving on printer ink to discontinuing athletic programs. Centers like CAPS were identified as ones that could become self-supporting by 2022, meaning the state money earmarked for their operation would no longer be allocated.

Judy Marshall, co-chair of the committee creating the report, said the recommended cuts are still being considered. The Chancellor’s Planning and Budget Advisory Council is scheduled to review and prioritize the suggestions and deliver a report to Colwell by Wednesday, said Rae Goldsmith, the university spokeswoman and the committee’s other co-chair.

Public universities across Illinois are considering ways to continue operations in light of the state’s historic budget impasse and the assumption some funding could be cut permanently.

Two stopgap measures passed through the Legislature in 2016 that totaled $83 million in financial support for SIU. Those funds, for the most part, were used to pay the bills from the 2016 fiscal year. The university started the 2017 fiscal year “basically back at zero” and is dipping into the reserves once again, SIU President Randy Dunn said following the release of the report.

Should SIU receive no state appropriations by June 30, when these proposed cuts could be implemented to the listed non-instructional programs, Dunn said the university would be “running on fumes.”

Meanwhile, the director of CAPS said a reduction in services would be detrimental for students. The center generally treats all its patients in-house instead of making outside referrals, Clark said, and other affordable mental health care options are rare in sparsely populated areas like Carbondale.

“This would really decrease access for students to get the help they need,” Clark said. “We see this as a social justice issue.”

Sessions cost $6 per visit under the student health insurance, but federal law requires the counseling center to treat survivors of domestic violence at no cost. Students can attend couples counseling and individual and group therapy as well as eating disorder treatment and suicide assessments. There are also crisis walk-in appointments for students who need to be seen immediately.

Emma Vogelsberg, a sophomore studying communications and industrial design, first started seeing a counselor in her hometown of Louisville when she was 15 years old and her mom unexpectedly died of a heart attack.

“You can’t deal with that all by yourself,” Vogelsberg said. “At some point, everybody needs to talk to someone.”

Vogelsberg arrived on campus in the fall of 2016. She said she was too busy with schoolwork to visit the university’s counseling program, but decided to start seeing a therapist again last week. Her first session was on her mother’s birthday.

“It keeps my mind clearer and allows me to focus on things I need to focus on instead of worrying about things I can’t necessarily change right away,” Vogelsberg said. “It kind of lifts weight off my shoulders.”

Though the cuts to counseling services were outlined in the non-academic prioritization report, Clark said CAPS also has a significant academic benefit for students, too.

The center’s training program uses six doctoral interns every year and anywhere from 16 to 20 practicum graduate students. Clark said CAPS is essential to the accreditation of SIU’s counseling and psychological services program.

If state funding is cut, Clark said those student positions would be eliminated. Some of the center’s 12 full-time employees could be also laid off, she said, making it impossible to oversee student training.

Clark said the next step for CAPS if funding was cut would be to reach out to the student government groups on campus to discuss the possibility of the center getting a student fee.

“Students are most knowledgeable of what their needs are and we really want to teach them to be consumers of their own health care,” Clark said. “It’s our job now to educate them on what it might mean to lose these services.”

Paul Copeland, coordinator of Veteran Services, said the CAPS program is the only outlet for student veterans to receive therapy on campus since losing the Veterans Integration to Academic Leadership program last year.

The program was intended to acclimate student veterans with post traumatic stress disorder to campus and was discontinued in May after the Department of Veterans Affairs lost federal funding, Copeland said.

Copeland said the loss of the university counseling center would create an additional burden for student veterans who can’t access off-campus therapy.

“Counseling shouldn’t be this complex,” Copeland said. “It’s a necessity.”

For veterans such as himself, Brandon said the transition from combat to civilian life is difficult, and talking to a counselor helped him “return to normalcy.”

“I was totally non-functional while I was depressed” Brandon said. “I still get sad, but they taught me how to handle those feelings.”

Brandon said while in counseling, he learned how to acknowledge all feelings, whether they were pleasant or depressing. And after a 13-year hiatus from painting, it’s helped rekindle a former hobby.

“They really encouraged me to pick up art again, and I even added it as my minor,” Brandon said. “It helped me heal from the inside.”