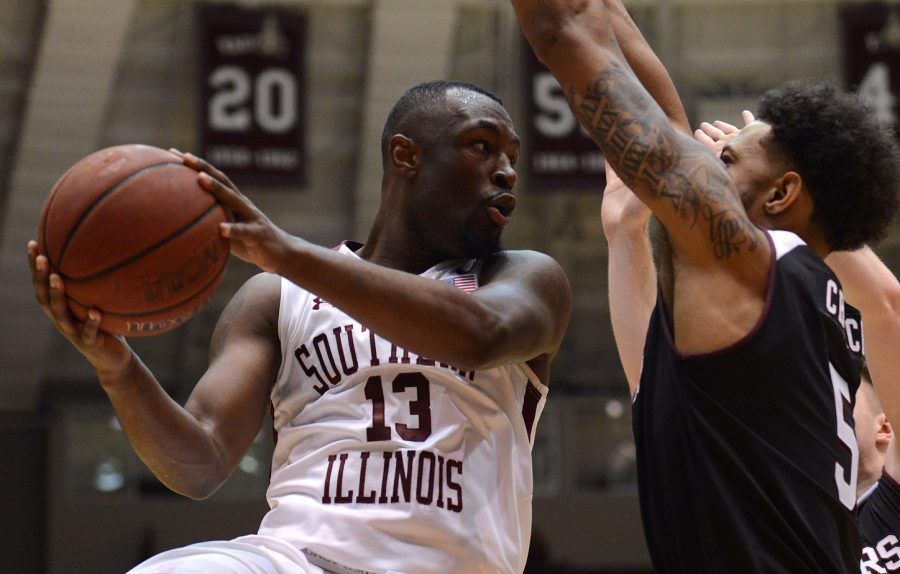 The SIU men’s basketball team stepped up big time Saturday in the second half and held on in overtime, beating Missouri State 85-84.

After three straight losses, this game was a must win for the Salukis.

“This was a huge win,” senior forward Sean O’Brien said. “I’m so happy for our whole team. We were struggling, we came together as a team after that last game against Wichita and talked about how our intensity needs to be better. We didn’t show that in the first half but we bounced back in the second. Everybody stepped up and made big plays.”

Bear junior forward Alize Johnson scored the first basket of the game — an easy layup to give Missouri State an early advantage.

MSU maintained control for the opening minutes, stretching their lead out to 8-2 with 16:52 remaining.

The Salukis’ offense eventually got going and they put together a 6-0 run to tie the game at eight.

That’s how the game went for the first half of play. MSU went on multiple runs to stretch their lead out, but SIU clawed its way back to tie the score but never could overtake the Bears.

With 2.4 seconds remaining in the first half, a nice pass from sophomore guard Jarred Dixon to junior forward Chris Kendrix for an easy layup extended Missouri State’s lead 40-28 with one half of play to go.

The Bear’s offense looked unstoppable. For most of the opening half they shot a scorching 80 percent from the field. They ended the period making 63 percent of their shots and 44.4 percent from deep.

Coach Barry Hinson said that, come halftime, he didn’t know what to tell his players.

“I said … ‘You guys are the ones that have to figure out what we’re going to do in the second half, as far as our energy our attitude and our effort, you have to do it because you’re not listening to me right now.’ And they did,” Hinson said.

The Salukis looked like a totally different team in the second half — they went on a 4-0 run to open the period until Johnson hit a 3-pointer, bringing the score to 43-32.

That cut Missouri State’s lead to just two, but senior guard Dequon Miller got to the free throw line and gave MSU a 4-point advantage again.

With 11:06 left in the game the Salukis finally put together a run to overtake MSU — Southern scored seven straight to put them ahead 54-51.

Sophomore guard Sean Lloyd made some big baskets in the second half, scoring 14 of his 15 points in the period.

With time winding down, Rodriguez made a pull-up midrange shot to extend SIU’s lead to three.

Then with eight seconds on the clock, MSU junior forward Jarrid Rhodes made a 3-pointer from the right corner to send the game into overtime.

Overtime opened with O’Brien hitting a hook-shot from underneath the rim before finding junior forward Thik Bol for an easy layup, giving SIU a 73-69 advantage early.

Missouri State didn’t let the game get out of hand. Miller made two free throws to tie the game at 73 with just minutes left on the clock

O’Brien and Johnson would trade baskets tying the game at 75 with 2:17 remaining.

After Fletcher made a midrange jumper on one end, Miller hit one on the other end, cutting the Salukis lead to just one with 14 seconds to go.

Fletcher put up a double-double, having 10 points and 11 rebounds.

Lloyd would score the next four points for SIU at the free throw line, giving Southern a 82-79 advantage with seven seconds to go.

Missouri wouldn’t give up and stretched out remaining time by fouling Rodriguez, making him shoot free throws and making some themselves.

Down four points with less than three seconds to go Johnson dribbled to half court and cashed in a 3-point shot, making the score 85-84 with 0.5 seconds on clock.

Southern got the ball in without getting fouled and won the game 85-84.

The Salukis will be back in action at 7 p.m. Wednesday against Bradley at SIU Arena.

“The most important thing is that we had to get out of here with a win,” Hinson said. “Didn’t matter if it was ugly, but I will say this you have to earn a victory and we earned it. It wasn’t given to us, and with our level of confidence, I can’t complain at all.”