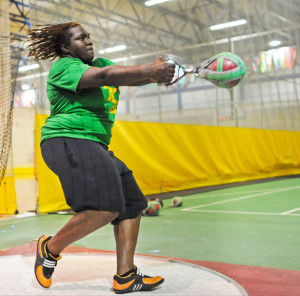 The SIU women’s throws team added the best shot putter in America in the spring, according to iaaf.org, a website dedicated to track and field statistics.

Freshman Raven Saunders became the best high school American and third-best world shot putter with a 17.28 meter throw, which is more than 56 feet, during her senior year at Burke Middle High School in South Carolina before signing with SIU.

Throws coach John Smith said he did not think Saunders would come to SIU. He never even thought to call her because she was so talented and big named schools were interested in her.

“Raven was actually upset we hadn’t called her,” he said. “I told Connie [Price-Smith, SIU track and field head coach] that girls like that don’t come here. When I called her, she wanted to come for a visit. She actually committed here the next day and the other schools didn’t believe her.”

Saunders said she was looking at Arizona State, Louisiana State and UCLA, along with SIU.

She said she liked the other schools but SIU’s coaching staff stood out.

“I chose it because of the throwing program and how the coaches have bettered their athletes over the years,” she said. “Coach Smith has the best output of athletes and I felt like this was the place I needed to be in order to get to where I want to go in life.”

Saunders is only 18 years old, but her accolades show much more experience than her age would suggest.

“It meant a whole lot to see that all the work I’d been putting in, even when there was no one but me and my coach to watch me, all paid off in the end,” Saunders said. “Some of those accolades are things I didn’t even know were out there, I was just trying to get a full ride to college really.”

Saunders was also named the Gatorade National Girls Track and Field Athlete of the year. This award came with an invitation for Saunders to walk the red carpet at the 2014 ESPY’s.

“That was a shocking moment to see some of the biggest name athletes in person,” she said. “I got to go with my mom. It made me proud that I could offer her that chance to travel so far away because she had never been able to before.”

Saunders said she thinks about the awards, but her main focus is to win an NCAA Championship.

Saunders is preparing for her first collegiate track and field meet on Dec. 6. at the Saluki Fast Start.

“I am really looking forward to it,” she said. “I know it’s going to be a completely different atmosphere competing with older girls who look down at me as a freshman athlete.”

Smith said Saunders is progressing well through practice and her numbers are better than she has ever done before.

“I have no idea what is going to happen in the first meet,” he said. “She’s in shape to do something really good. She could drop the American Junior record in the first meet of the year or she could go in there and foul out because she’s too strong.”

The current American Junior record, according to the USATF website is 16.41 meters, or slightly less than 54 feet. The record was set by Christina Hillman on July 25, 2012 in Baltimore.

Smith said every athlete goes through a transitional stage between high school and college but he thinks the talent Saunders has already faced might give her an edge.

“She’s got good experience, but she hasn’t seen a NCAA Championship yet,” he said. “It’s the third-best track meet in the world, I’d put it higher than the World Juniors. Until she goes through that, you don’t know how she’s going to react.

Saunders participated in the International Association of Athletics Federations World Junior Championships this year and won the silver medal in shot put with a distance of 16.63 meters, more than 54 feet. Tianqian Guo from China won the event with a throw of 17.71 meters, more than 58 feet.

She is only the second American to medal in the event in the last 10 years. The other person to do that was Michelle Carter, a two-time Olympian and still the American outdoor record holder. She won the gold at the 2004 World Juniors with a distance of 17.55 meters, more than 57 feet.

Price-Smith said Saunders could become an Olympian eventually. She said the experience Saunders has received from those competitions will help her going forward.

“I think it’s great for her mentally, knowing that she can go and compete with the rest of the world,” she said. “That’s one of the great things about the junior teams. It starts them in competitions early.”

Saunders said she thinks about the Olympics as a possibility in the future, but while she is at SIU, she is focused on winning an NCAA Championship.

She said training is going well and the possibility is there for her to make it to the NCAA Championships, but she needs to keep working like she is last on the team.

“If she does what I think she can do, I think she can challenge for an NCAA title this year indoors,” he said. “If she learns what I want to teach her, she will have the stuff to succeed.”

Smith said Saunders has a successful career already, but like every athlete, there are things to work on.

He said Saunders is the strongest girl he has ever had in the weight room, but she still needs to work on using her legs in order to better her throw.

“She’s got a million dollar punch but she has two cent legs,” he said. “I’m working with her on how to learn to use her legs though. That takes time. She’s better now, but she’s nowhere close to where she needs to be.”

Saunders said her teammates have not only pushed her athletically, but also academically.

She is excited about starting her career and season with her new teammates.

“I think we could be a really good team by the time we get to NCAA Championships,” she said. “These girls have been through it all and we’re all working really hard at it.”

Saunders and the rest of the SIU Track and Field team will start the indoor season at 10 a.m. on Dec. 6 at the Saluki Fast Start.

Brent Meske can be reached at [email protected] or on Twitter @brentmeskeDE.