Party bus to give $1 rides during Polar Bear 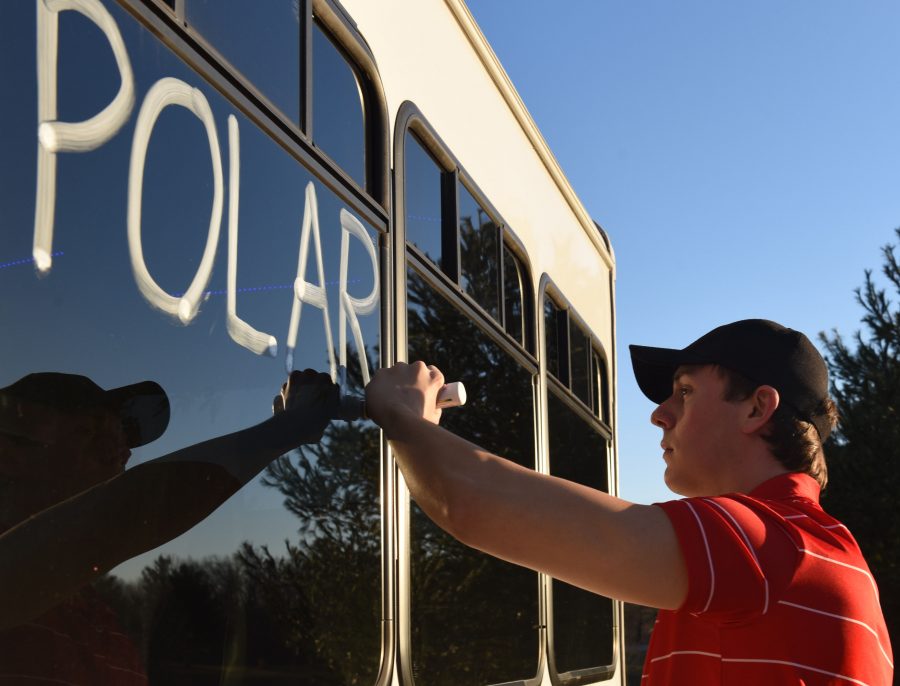 Jakob Guetersloh writes "Polar Express" on the side of his bus Tuesday, Jan. 24, 2017, in the driveway of his Murphysboro home. The 19-year-old is owner of At Your Service, a party bus company that specializes in tours along the Shawnee Wine Trail. Guetersloh, a second-year student at John A. Logan College, bought the bus in November 2015 with the intention of doing tours, and offered a special deal during Polar Bear weekend, an annual party for SIU students, that jump-started the small business. He gave rides to people on the street who flagged him down for $1 apiece. The teenage business-owner said that he wanted to make sure no one mistook him for the Saluki Bus — an error some made in January 2016. “They were asking me where the swiping thing was and told them ‘It’s a dollar,’ he said. “It was just kind of funny though because they were so confused." (Bill Lukitsch | @lukitsbill)

The Polar Express is coming to Carbondale.

Jakob Geutersloh, the 19-year-old owner of At Your Service, an area party bus and tour company, said he plans to drive hundreds of Polar Bear partiers on Saturday for the second year running. The ride is $1 and passengers are allowed to choose between landmark destinations, area liquor stores and bars in Carbondale.

Guetersloh is a second-year John A. Logan College student who works at a heating and air conditioning company in Steeleville. In his off-hours, he and his mother operate the family side business, which offers tours along the Shawnee Wine Trail and accommodates private parties.

The idea to open the business came to Guetersloh when he was working at Midland Inn as a busboy while a junior at Murphysboro High School. Wine trail tourists would often come to the restaurant, and he saw it as an opportunity.

“That was the basis behind it,” he said. “It just seemed like something that could progress in the area.”

In November 2015, Guetersloh and his mother, Kathy Guetersloh, found two Starcraft buses and made the purchase. The interior of each one was fitted with new LED lights, stereo systems and air conditioning units.

When Polar Bear rolled around last year, Geutersloh took one of his newly purchased buses out to pick up and take party-goers from one place to the next. He estimated the bus, which seats up to 11 people comfortably, filled up every 20 minutes and accommodated 400 people altogether. The service ran from the early morning until about 7 p.m.

“It didn’t seem like anybody was having a bad time,” he said. “It was a blast all around.”

While Geutersloh counted last year as a success thanks to the frequency of customer use and the chance to make new friends, he has a couple things he wants to do differently in the new season. For one, he’s tried to distinguish the large, white bus from local public transportation to avoid confusion.

“Last year people were drunk and mistaking me with the Saluki Bus,” he said.

He also said he plans to find someone to drive the other bus he owns to double the potential for this year.

Guetersloh said he hopes one of the two buses will be on the busy side of town once every 15 minutes. The route could change based on the destination of passengers, but he said he plans to keep close to Mill Street and Grand and South Illinois avenues.

As the business has grown in its first year, Guetersloh said he’s thought of expanding the operation by purchasing a large bus to fit a group as large as 30 people. But between his day job in Steeleville and trying to finish his last semester at John A. Logan College, he said he figures it’s best to wait for a partner to invest before he make that change.

“That’s been a discussed process for down the road,” he said. “Just got to give it a bit more time and keep growing the business as it is right now.”