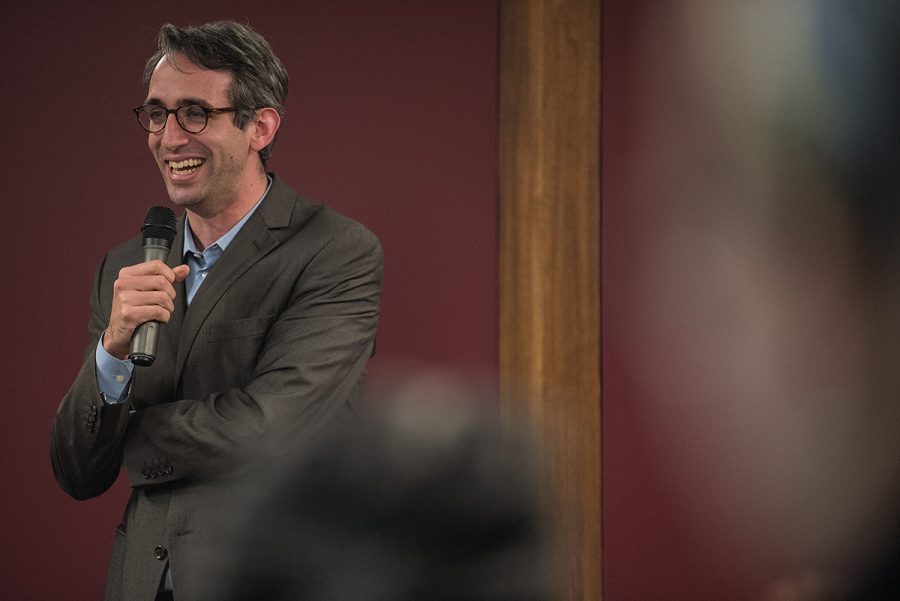 State Rep. Will Guzzardi, D-Chicago, in the 39th district, speaks to a crowd about the possibility of free tuition at public colleges and universities in Illinois on Thursday, Jan. 26, 2017, at the Paul Simon Public Policy Institute. “This is not impossible,” Guzzardi said. “It’s within our reach.” (Jacob Wiegand | @jawiegandphoto)

Democratic Rep. Will Guzzardi visited the university Thursday to advocate for free public university education in the state through legislation he plans to sponsor.

The representative discussed amending the state’s tax code with a 3 percent surcharge on personal incomes over $1 million and closing “some of the most egregious corporate tax loopholes.”  These measures, Guzzardi said, would generate enough income to pay tuition for every in-state student.

In the event that the bill passed, private universities would consequently “curtail their tuition making them more accessible,” said Guzzardi, a graduate of Brown University.

The representative of the 39th district is also a proponent of other reforms, including protecting workers’ rights and tackling the state budget. Guzzardi, a 29-year-old Illinois House member from Chicago, presented his plan to a crowd of students, university employees and area residents during a talk hosted by the Paul Simon Public Policy Institute.

Guzzardi said he recognizes the crisis of student debt and the burden of its load because it’s one he still shoulders.

“This issue is personal for me,” Guzzardi said “I’m carrying tens of thousands of dollars of student debt.”

Guzzardi spoke of the situation that public universities are currently facing and could face if the state’s 18-month budget impasse continues, blaming Republican Gov. Bruce Rauner for Illinois’ financial woes.

“There are several institutions in this state that might not be able to pay their bills,” Guzzardi said, mentioning Chicago State University among others.

As public colleges around the state are cutting back on programs, Guzzarrdi said he thinks the legislation might be a remedy for what ails Illinois’ universities. Through these reforms Guzzardi said he hopes to better the state’s economy by making it attractive for outsiders to move to Illinois.

“We send 10 times more Illinois students to public universities out of state as other states come to Illinois,” Guzzardi said.

His current advocacy efforts for free in-state tuition are part of a larger tapestry of solutions for issues he believes will help Illinois’ economic crisis.

“Our planet is burning up, our economy is tanking, there are no jobs, the student debt is tremendous,” Guzzardi said, pleading for overall reform to fix “the mess that is the state government”.

With many Illinois House Republicans being a foreseeable impediment to this legislation, Guzzardi said concerted efforts in student organizing could play a critical role in enforcing overall support for the cause.