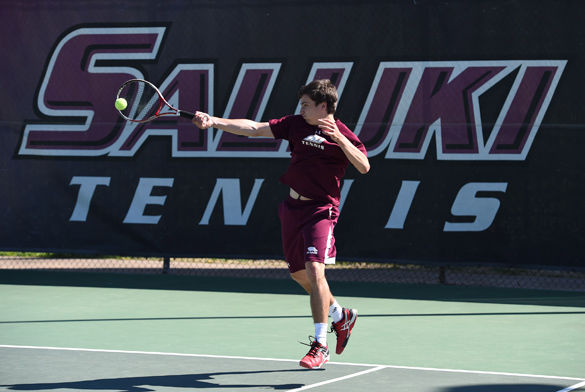 By Sean Carley and Luke Nozicka

Saluki Athletics announced Thursday that it will eliminate the men’s and women’s tennis teams as well as reduce the number of men’s swimming scholarships, effective July 1.

Once fully enforced, the cuts will save the university approximately $660,000 annually in scholarships, salaries, travel and other costs, according to a university news release.

“This was an incredibly difficult decision because of the impact it will have on the lives of our student-athletes and staff,” Director of Athletics Tommy Bell said in a statement. “These student-athletes have been great ambassadors for our university, excelling both in competition and in the classroom.”

The 16 tennis players will be able to continue using their scholarships until they graduate or transfer without NCAA penalty at the end of the academic year. Bell said the scholarships cut from the swimming team are tied to athletes graduating in May, thus only affecting future swimmers.

The last time SIU cut a sports team was in 1989, when Charlotte West, the interim athletic director at the time, eliminated wrestling, women’s field hockey and men’s and women’s gymnastics, Bell said during an interview with reporters.

After the elimination of the two teams, SIU will consist of 16 intercollegiate sports programs, two more than the Division I minimum of 14 teams.

The department came to the decision after a year-long review that involved what Saluki Athletics called a thorough budget impact analysis and a Title IX assessment.

Bell said athletics decided to cut the programs in December but held off on notifying the team because of finals and the holidays over winter break. The athletic director, who was appointed to his position in May 2015, said he notified Audra Anderson, SIU’s director of tennis operations, on Thursday morning before telling the teams.

In the last year, SIU athletics has made more than $1 million in cuts by reducing sports budgets and support staff, and consolidating positions. The athletic department has an operating budget of $21 million, Bell said.

Bell said additional cuts needed to be made because of “ongoing declines in revenue from student fees, ticket sales as well as budget forecasts indicating reduced future revenue.”

“We have spent the past 18 months cutting costs and streamlining the way we do business in athletics, in the hopes we could avoid eliminating sports,” Bell said. “In light of the severe budget environment, we simply ran out of options. As budgets are cut across campus, athletics must do its part.”

The termination of the two teams comes during Illinois’ budgetary stalemate between Republican Gov. Bruce Rauner and Democrats who control the state Legislature, including House Speaker Michael Madigan.

In 2016, two stopgap measures passed through the Legislature totaled $83 million in support for SIU. Those funds, for the most part, were used to pay the bills from the 2016 fiscal year, in which Illinois was the only state in the nation without a budget.

Jonny Rigby, the graduate assistant for the men’s tennis team, said he was disappointed by the news because SIU tennis “has always been a big part of my life.”

“It’s frustrating because we did everything right, but it just came down to the money,” Rigby, who as a player had the second-most combined wins in SIU history, said during a phone interview. “We just want people to remember what a great program they’re losing.”

The teams have also excelled in academics. Each team was recognized by the Intercollegiate Tennis Association as an All-Academic Team in eight of the last 10 years by earning a cumulative team GPA of 3.2 or higher, according to the university’s news release.

As for Anderson, the fourth head coach in program history, her contract is set to end at the conclusion of this season, Bell said.

In August, after then-men’s tennis coach Dann Nelson accepted the head coaching position at Texas Rio Grande Valley in Brownsville, Texas, Anderson was tasked with coaching both the men’s and women’s teams.

“I deeply empathize with the human toll this decision creates,” Colwell said in a statement. “I’ve met members of these teams and found them to be among the best and brightest at SIU. Nevertheless, I concur with AD Tommy Bell that this outcome was necessary. In fact, I believe it helps position Athletics to thrive going forward.”

Daniel Martinez, a men’s tennis player who is graduating in May with a bachelor’s degree in business economics, said learning of the program elimination hurt.

“We just want to finish the season out strong,” he said.