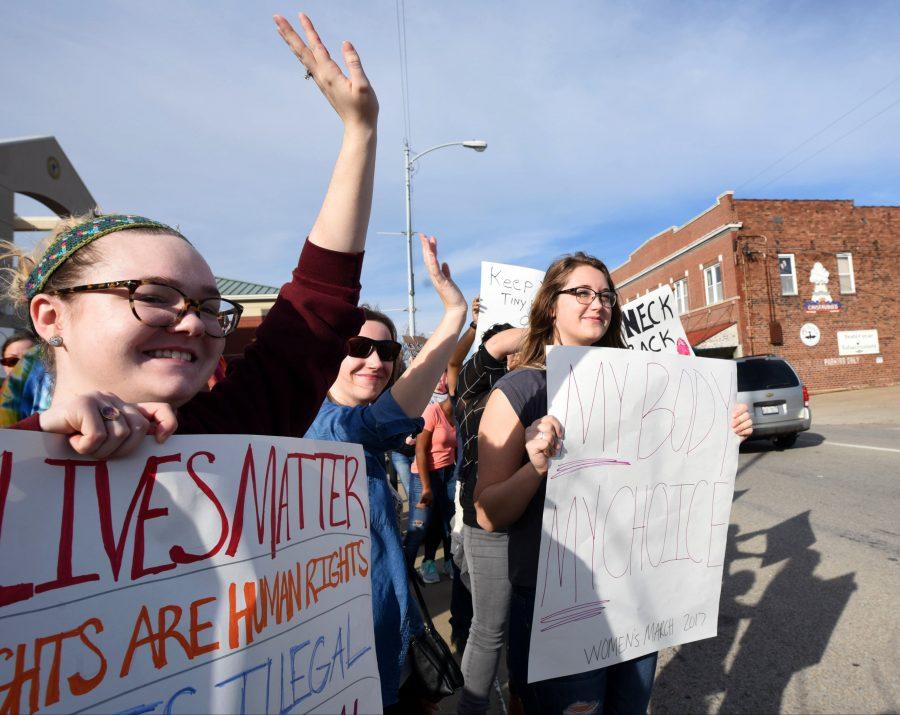 For Carbondale resident Sylvia Greenfield, the scene on Saturday afternoon at the Carbondale Civic Center was a familiar one.

As about 800 people gathered for the Southern Illinois Women’s March to stand up for causes like reproductive rights, the Black Lives Matter movement, climate change and universal health care, Greenfield remembered another time in American history.

“I was in Washington in 1963 for the civil rights march,” said Greenfield, who has lived in the area since 1968. “I certainly didn’t think I would be doing this again 50 years later.”

Greenfield said her main motivation for marching, like many others who walked the one mile route through the city, was President Donald Trump.

“I worry about the loss of human rights,” Greenfield said. “How can [Trump] run a country? He has no empathy, except for millionaires.”

The day began at 9 a.m. with a community breakfast, followed by sign-making and icebreaker activities. Similar demonstrations took place in more than 650 other cities across the world, including Chicago, New York, Los Angeles and Washington. The march was preceded by chants and songs led by pastor Sarah Richards of the Carbondale Unitarian Fellowship.

“Show me what democracy looks like,” Richards said to the crowd.

“This is what democracy looks like,” marchers chanted back.

Marsha Forest led a Native American Blessing of the March, which was taken from a thanksgiving prayer of the Mohawk Tribe.

“Once this march is over, I hope and pray you don’t go back to sleep,” Forest said, adding that everyone should find out who their local legislative representatives are and “become their pen pal.”

When the hundreds of marchers began to file out of the Civic Center and onto the sidewalk, event organizer Kathryn Neely stood to the side as the line passed her. For every five or so participants that went by, one got Neely’s attention to say, “Thank you.”

“I’ve been getting that all week,” Neely said. “People have been coming up to me saying ‘I’m so glad to be able to march with my mother, my daughter, my niece.’ This has truly struck a chord with the community, and I’ve had help from so many.”

Taylor Butler, a junior from Dayton, Ohio, studying mechanical engineering, carried a sign that read “A woman’s place is in the revolution.”

Bigotry has always existed in the United States, Butler said, but she fears Trump is normalizing harmful ideologies.

Butler said some may view protesting as useless or inconvenient, but “protesting has always changed the world.”

“Of course protest is inconvenient,” Lichner said. “That’s the point. It’s supposed to be inconvenient. Donald Trump’s whole presidency is an inconvenience to my existence.”

Other signs had slogans like “Respect your mother, your wife, your sister, your daughter and yourself,” “We can’t build a wall to stop climate change,” “Love, not hate, makes America great,” and “Healthcare for all.”

For some, the march was about sending a message to future generations.

Jenny Akers, a Carterville resident of 20 years, brought her 14-year-old daughter Gia to the event to “set a better example” than she said she feels Trump is setting.

Gia and her two brothers were born in Guatemala but have lived in the U.S. since they were infants. Akers said the “discriminatory behavior” Trump displays toward immigrants and women makes her concerned for her children.

“My son had someone at school tell him they hated the color of his skin,” Akers said. “And I fear some of the rights I grew up having as a woman may not be there for my daughter.”

Akers made a sign for her daughter that read “Todos somos iguales — we are all equal,” and said she hoped the march would drive that point home for the teenager.

Following the demonstration, marchers returned to the Civic Center for live music and refreshments and to reflect on their march experience with one another.

Ekateryna Bondareva, a 2013 alumna currently in graduate school at Southern Illinois University-Edwardsville, said the march was meant to “lift people up” and express that the community “will not be silent.”

“I felt so serene and euphoric in support of these major issues,” Bondareva said. “There has been nothing but love and comfort and peace here.”