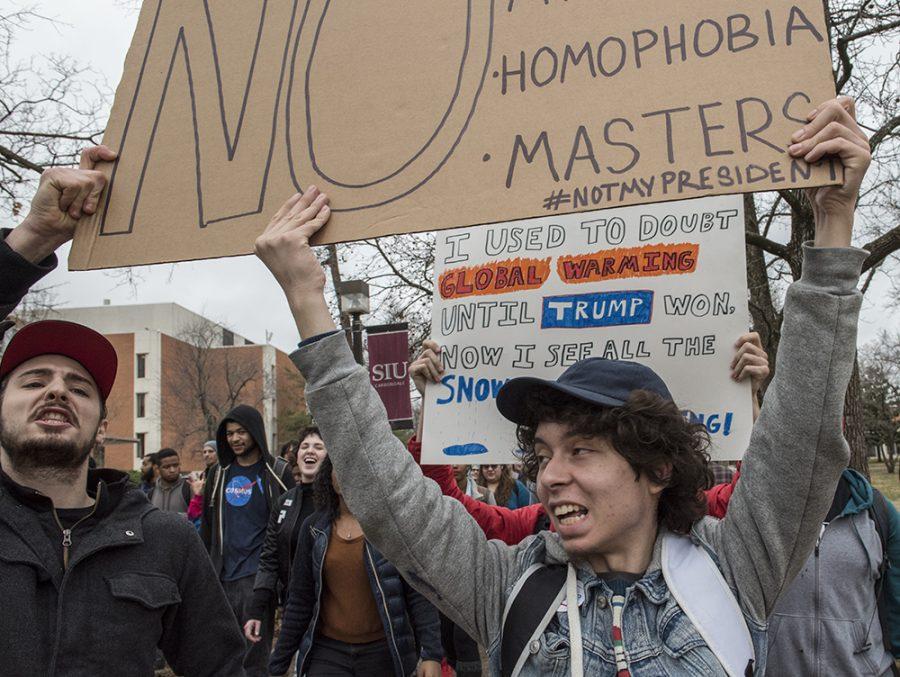 As President Donald Trump held up his right hand, SIU students held up their fists.

The inauguration ceremony of Trump on Friday was met with more than two hours of campus demonstrations led by both supporters of and protesters against the nation’s new leader.

At least 50 students and Carbondale community members gathered on campus to rally for issues concerning policies and agenda as the 45th president took the oath of office in Washington. The walkout was headed by Sam Beard, a junior from Naperville studying philosophy and Alexis Kimbrell, an SIU alumna.

The protest started at 11 a.m. in the Student Center cafeteria. From there, the group made its way around campus. But before the walking began, Beard, megaphone in hand, addressed the crowd outside of the Student Center.

“This particular walkout might not lead the pussy-grabbing, wall-building, climate-change-denier shaken in his gilded boots, but it will help us rediscover our collective power so we can begin to build it back up to where it needs to be in order to get control over our lives,” Beard said.

The group moved through Morris Library, chanting  “Not my president,” “Black lives matter” and “No justice, no peace, no racist police.”

The students made their way through the Student Center, past Neckers and the Agriculture Building, stopping at intervals to offer turns speaking from the megaphone.

Jacquiese Robinson, a freshman from Chicago studying mortuary science and funeral service, told the crowd Trump has made people comfortable with spewing hate. Later, she called on people to band together.

She added that in response to the election her peers should “fall back on each other and respect each other.”

Anti-Trump members held signs that read “Wake up the kids, wake up the sheeple. We are one, we are the people” and “No racism, misogyny, homophobia, masters.”

A handful of students also came out to show support of Trump, sporting his signature red baseball caps. They displayed signs of their own, with sayings like “Make America Great Again” and “I used to doubt global warming until Trump won, now I see all the snowflakes melting.”

Thomas Birch, a junior and Trump supporter, said he came out to prove that not everyone at SIU is anti-Trump.

The demonstrations remained peaceful, although supporters of both sides of the argument engaged in some heated verbal exchanges.

During a gathering in front of Morris Library, some Trump supporters asked to address the larger gathering of protesters, but the crowd silenced them.

Kimbrell, one of the two co-organizers, said the demonstration was supposed to allow anyone with an opinion on the inauguration ceremony to speak. When the demonstrations were nearing the end, she questioned the decision to censor the discussion.

“Maybe we should’ve let the Trump supporters speak because we were letting everybody talk and we shut people down, which maybe was one of our mistakes,” Kimbrell said. “We are here for everyone’s voice.”

Kimbrell also reasoned that some of the points the supporters made could have caused unrest among the crowd, and that keeping peace took priority.

“Our only chance for fundamental change will come from creating a situation where those in power fear that their power will be lost,” he said.

Staff writer Shannon Allen can be reached at 618-536-3326, [email protected] or on Twitter @ShannonAllen_DE.