Winningest debater rewarded as a coach 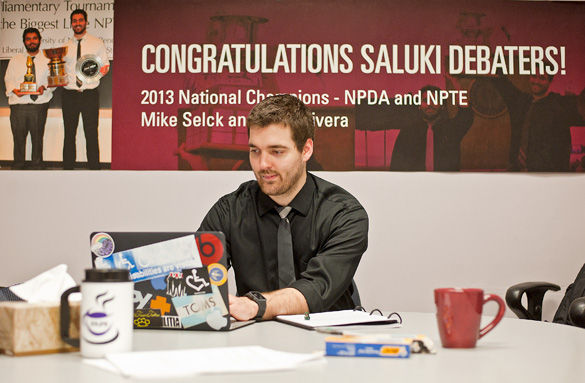 The winningest collegiate debater has made the transition from champion competitor to champion coach.

Selck was named the Debate Coach of the Year for 2014 from the Washburn Debating Union on Nov. 15. Kevin O’Leary, director of debate at Washburn University, said Selck’s desire to give back was a major factor in his selection.

“I always learn a ton when [Selck] is critiquing,” he said. “He’s one of the few critics I care about.”

Todd Graham, SIU’s director of debate, was the inaugural winner of the award last year.

Selck said he dedicates this award to Graham and the university for their support.

“I will never be able to find the exact right words to thank Todd or the university,” he said. “The biggest honor of this award is to have Todd’s name, then my name right after it, forever. It will be there, engraved, forever.”

Selck began debating in high school by accident. He was required to take a speech class, but all introductory courses were full, so he was thrown into a speech and debate course.

Selck said he had a caring instructor for that class, and he also loved to hear himself talk.

The instructor made Selck a fan of debate and he began spending hours researching topics and arguments, and tailoring his coursework to debates.

“I found a way to really mix up all of my lifestyles, so they were all contributing to the grand goal of winning a debate championship,” he said.

Graham said research is key to debating, making up 90 percent of debaters’ time.

“Speaking skills are important and we’ll practice them a little bit, but much less important than the information you have coming into a round,” Graham said. “We’ve won back-to-back national championships, not because we’re prettier speakers, or because we’re good at B.S., but because we hit the books.”

Team members have to think about what the other team will respond with so they spend time researching and preparing a strategy.

An example comes from a tournament last year. The team had the topic of defending CIA Director John Brennan from being fired by President Barack Obama. Instead of saying Brennan deserved to be kept, the team conceded that he was doing a bad job, but his replacement would be even worse.

Graham said Selck is great at researching and formulating strategies. He learned the foundation of traditional debate, which is dealing with an issue or topic, from Graham.

During Selck’s senior year, Graham predicted the team to go undefeated all year based on how good they looked.

“I told the other coaches, ‘I think we’re going to run the table’ and they said, ‘You don’t think you’re going to lose a tournament this year?’ I said, ‘I don’t. I’ve been watching them debate and that’s how good we are right now,'” he said.

Despite Graham’s bold statement, the team lost the following round.

Selck said he is a critical person is his nature. He said he is interested in power dynamics and studies who has power, why they have it and how they keep it.

“I’m always thinking about how communication, the words we use, the discourses we have, and how they frame all of our relationships,” he said.

One power dynamic he has analyzed deals with the switch to coaching. He has gone from being teammates with some of the debaters, to being their coach.

He said it is his philosophy as a coach to give back to his players and pass on his experiences.

“Power is knowledge,” he said. “I have all of this knowledge over the eight years that I have done debate, so for me it was ‘How best can I give back to the community that which it has given to me?'”

During a debate, it is the job of non-competing coaches to judge. They decide who wins and loses, and explains why.

Graham said he is not as good at that aspect as Selck because he is paid to coach SIU students, not anyone else. Selck’s desire to give back is one of the things that set him apart from other coaches.

“He doesn’t just keep it to himself,” Graham said. “He believes in trying to educate the whole community.”

Selck goes beyond his basic duty and tells the competitors how exactly they can improve and get better by suggesting sources and literature.

“I remind them that each and every one of them can become national champions if they want it,” he said. “There is a huge opportunity for vertical progress in our activity, but that only comes when coaches and judges dedicate themselves larger than to just their team. It’s about building character.”

Austin Miller can be reached at [email protected] or on Twitter @AMiller_DE.