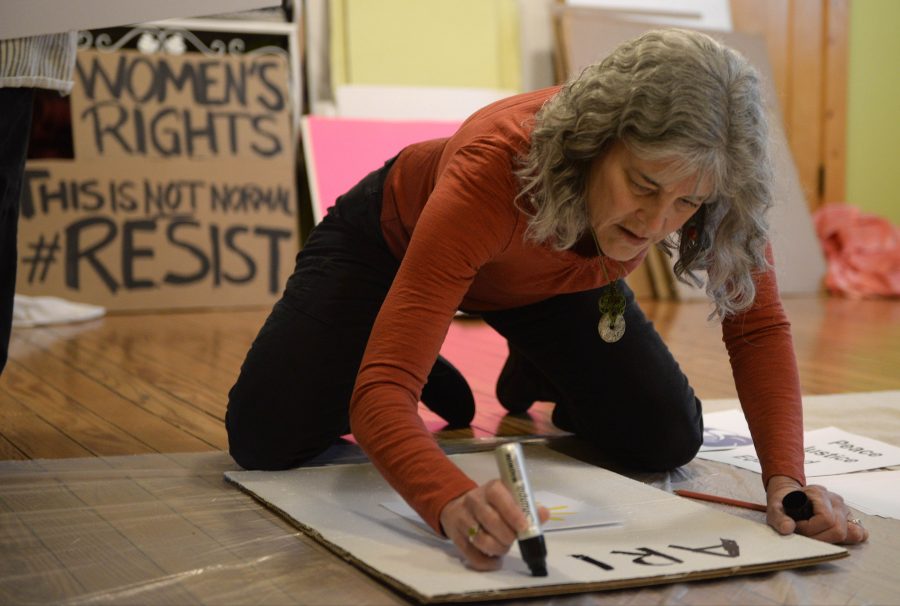 Carbondale resident Jan Eisenhard works on a sign during a gathering of demonstrators Saturday, Jan. 14, 2017, at one | o | one yoga in Carbondale. The signs are meant to be used in a march for women's right on Jan. 21. (Bill Lukitsch | @lukitsbill)

For Carbondale resident Rose Weisburd, peacefully protesting the incoming presidential administration is not only a right but a responsibility.

Weisburd was born in Germany. She was brought to the United States as a child and adopted. When she became a naturalized American citizen at 18 years old, Weisburd said she swore an oath to protect the country from “all enemies, foreign and domestic.”

“We’re heading somewhere dark,” Weisburd said. “I have to do what I can to resist that and live up to my oath.”

This is what motivated Weisburd to get involved with the Southern Illinois Women’s March, which will take place from 9 a.m. to 5:30 p.m. on Jan. 21 at the Carbondale Civic Center. Participants will leave the Civic Center for the mile-long march at 1 p.m., but the hours leading up to it will be filled with sign-making and community building exercises, march organizer Kathryn Neely said.

Though Weisburd was spurred into action by the election of Donald Trump, Neely said the event is “specifically not about protesting the president-elect” and that there will be no anti-Trump signs.

Neely said she describes the event as “apartisan” because she wants to encourage people with different viewpoints to participate.

“We have room in our community for all opinions and those people who think differently can still walk down the street next to each other,” Neely said. “Maybe they’ll have a conversation and learn something.”

More than 350 people have committed to attending the march on the event’s Facebook page, and Neely said she anticipates more than 400 people will show up.

After the march, there will be a short wrap-up celebration at the Civic Center featuring local bands Teen Angst, Loose Gravel and Kindred Moon.

At a sign-making gathering Saturday afternoon in Carbondale, Murphysboro native Marion Adams-Sai said she felt an obligation to “stand up for the equality of women.”

“I don’t think it’s a partisan issue,” Adams-Sai said. “Every American citizen, regardless of political affiliation, has a duty to have conversations like this with our government.”

As Adams-Sai worked on the sign she will hold during the march, which read “The rise of the woman equals the rise of the nation,” her infant son Matine played with toys on a blanket next to her.

“Practically my whole family is marching, including my baby,” Adams-Sai said. “We’re all concerned with what the new normal is becoming.”

She cited her primary fear being the loss of the Affordable Care Act, which Trump and Republican lawmakers have vowed to repeal and replace.

Helen Nall, a retired American history professor and 40-year Carbondale resident, agreed, adding that she thinks southern Illinoisans would be particularly hurt by any cuts to Medicaid, which insures low-income individuals.

Nall, whose sign read “Health care for all,” is participating in the march because she worries about the direction in which the country is heading.

“I lived through the 50s,” Nall said. “I’m afraid that we’re going back on a lot of improvements we’ve made since then, especially for women.”

Also at issue for Nall is the anti-immigration rhetoric that surrounded Trump’s campaign and the policies he has promised to enact, such as building a wall on the U.S.-Mexico border.

“There’s just too much hate,” Nall said. “Too much intolerance.”

Another sign-making event is planned from 2 p.m. to 4 p.m. on Wednesday at the Unitarian Fellowship in Carbondale, Neely said.

Weisburd said even those who aren’t normally politically active should try to get involved.