Is distracted driving to blame for high crash statistics in Illinois? 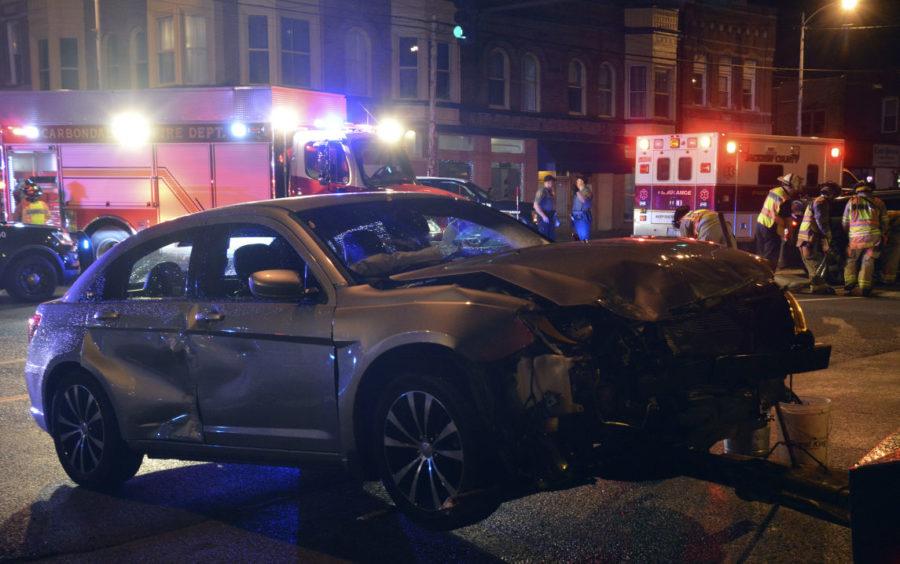 In less than four months, five people have died in crashes on Illinois 158 between Belleville and Columbia.

Jody Graff, a 48-year-old from Columbia, died after her minivan struck the rear of a dump truck on Illinois 158 near Roenicke Road on Oct. 18.

Less than two months later, a wreck on Illinois 158 near Belleville between a sport-utility vehicle and a truck killed three people, including one driver, Alejandro Salen, and two passengers, Jerilyn Hess and Christopher Craig.

Most recently, in the early morning hours of Dec. 19, 68-year-old Marlene A. Horn was pronounced dead after the driver of a blue Toyota RAV4 crossed the center line and struck her black Acura sedan head-on on Illinois 158 near Roachtown Road.
Is Illinois 158 a dangerous road?
State Police and local firefighters say it can be – only if a driver isn’t paying close attention.

Trooper Calvin Dye Jr., a spokesman for Illinois State Police in Collinsville, says rural sections of state highways can be “extremely dangerous.” It varies how often accidents happen on certain state highways, but Dye said it’s not uncommon for troopers to respond to Illinois 158 as well as state routes 177, 161, 4, 13 and 15 for crashes. Dye said State Police also rely on counties and local police agencies to patrol state routes.

Speeding is one factor on state highways. Drunken driving is another. But troopers believe distracted driving is a major reason the number of fatal crashes went up in 2016 across the state. The cause of two fatal crashes that happened on Illinois 158 in December are still under investigation, but in a separate crash in October police suspected a minivan driver, Graff, was distracted when her vehicle ran into the back of the dump truck.

“Usually on two-lane highways, when cars are going through town or city, there aren’t many accidents until they get to the rural parts of the two-lane highways,” Dye said. “When it becomes rural and there are cornfields on each side of the driver, they tend to begin to speed excessively. A lot of people start daydreaming. They just clearly don’t pay attention to the roadway. They become distracted with the cell phone, with the radios. We see our worst crashes here in District 11 on the rural parts of state highways.”

State Police say they’ve seen crashes where people have been distracted by cell phones, their vehicle radios as well as eating fast food. Last May, a 24-year-old man from Arkansas was cited after rear-ending an Illinois State Police car while apparently eating a meal from Jack in the Box.

Chester Borkowski Jr., fire chief of the Northwest Fire Protection District, said he could think of at least six times this past year when firefighters responded to serious crashes on Illinois 158. The fire department says it typically goes out to that roadway when serious injuries are involved or when people are trapped in their vehicle as a result of a crash.

“We’re seeing more and more of them, whether it’s from distracted driving or people looking at their personal data devices,” Borkowski said. “Put down the cell phones, put down the iPads and don’t worry about your GPS. Be aware of your surroundings, know where you’re going and use common sense because I’m sure these are a big factors police are looking at.”

The fire chief said his department spent more than four hours on the state highway Dec. 9 when a Ford Escape collided with a Chevrolet truck head-on. They called on Swansea Fire Department for help. Millstadt firefighters arrived, too, to assist with the aftermath of the deadly crash. Three people died, and one person was taken to a St. Louis hospital. A toxicology report for the Ford Escape driver, Salen, is expected to be made available sometime in January. Salen, in 2014, had been cited for driving under the influence. Police said the Escape driven by Salen had crossed the center line.

Millstadt’s fire chief, Kurt Pellmann, says he doesn’t know the answer to it, but firefighters there in just the last two months have worked several accidents along 158. In 2016 alone, Millstadt firefighters have been to 22 vehicle accidents on Illinois 158, almost half of the 48 crashes they responded to during the year. According to the fire department’s log, most of the crashes recorded on that road resulted in injuries.

“People need to slow down, pay attention to what they’re doing. A lot of it is speed and a lot of them may be on their phones,” Pellmann said. “It’s dangerous road, for one reason or another.”
Fatalities, deadly crashes up in Illinois
The five deaths that have been reported on Illinois 158 are among 41 fatalities that have been documented in St. Clair County in 2016, according to the Illinois Department of Transportation.

Statewide, numbers show that fatal crashes are up as well as fatalities, the number of people who have died from vehicle crashes. Fatalities are broken down by drivers, passengers, pedestrians, bicyclists and others who died as occupants of non-motor vehicles. IDOT said there were 999 deadly crashes that happened in the state in 2016, an increase from 914 in 2015. Crash fatalities were at a nine-year high by the end of 2016 with 1,081 deaths — an increase from 998 deaths in 2015.

“From a law enforcement standpoint, everyone thinks it can’t happen to them. A lot of times on the tail-end of these crashes, usually the innocent person ends up being seriously injured or decreased, so that really hurts us and makes us want to remove distracted drivers off the roadway, drunken drivers off the roadway,” Dye said. “People have to hold themselves accountable.”

Visit the Belleville News-Democrat at www.bnd.com