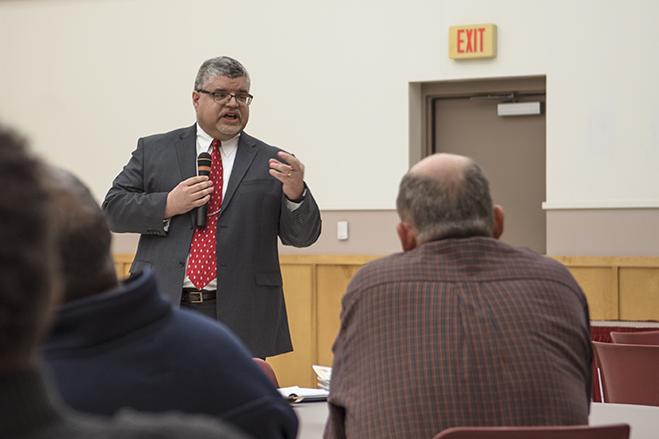 Interim Chancellor Brad Colwell addresses the audience during a question-and-answer meeting Monday, Jan. 9, 2017, at the Carbondale Civic Center. Colwell said hosting this type of event has been successful in the past and promotes discussion between university and community members. (Branda Mitchell | @branda_mitchell)

Interim Chancellor Brad Colwell on Monday addressed a number of concerns presented by community members during an open forum at the Civic Center, most of which were focused on a single issue: SIU’s lack of engagement with the region.

During the two-hour question-and-answer session between Colwell and event attendees, several people said they felt a decline in the involvement of SIU students in the community. Some said the problem isn’t that students and community members don’t want to engage with each other, but instead that SIU doesn’t facilitate communication between the two groups.

Carbondale resident and 2008 SIU graduate Doug Devore said he reached out to the campus Career Center more than once in an effort to involve students in internships or part-time employment through Cunningham Electronics Corporation, a startup company in Anna that employs Devore as a consultant.

Devore said when he called, he was told to fill out “cumbersome” online paperwork to register his business with the university and still never heard back.

“It just blows me away that I couldn’t get somebody to give me the time of day,” Devore said.

Emily Lyles, who graduated from the university about 40 years ago and has lived in Carbondale all her life, said she doesn’t feel well-informed about what happens on campus.

“There should be somebody [at SIU] whose job it is to communicate with the Carbondale community,” said Lyles, a retired Carbondale elementary school teacher.

Chuck Parrott, a Carbondale local of 30 years, agreed, adding he doesn’t think the community is made aware of the university’s situation.

“They’re thinking things are going to be alright, that they aren’t going to be much different, but we’ll never be back to 25,000 students,” Parrott said. “I don’t think they realize it, or they aren’t given that information.”

Colwell said he was unaware of the extent to which community members felt removed from university affairs, but said it’s something that can be improved.

“It’s very important to me that we continue to make the university meaningful to the community, and that’s something that we obviously haven’t done as well as we should have,” Colwell said.

University spokeswoman Rae Goldsmith said this event was the first of many steps aimed at building campus-community relations.

“We want to be open and hear what people have to say,” Goldsmith said. “We’re trying to be transparent.”

Other questions centered on the decrease in enrollment at SIU. Fall enrollment in 2016 hit its lowest point since 1965 with a total of 15,987 students, according to university data.

Jeffrey Young, a lifelong Carbondale resident and 1995 SIU graduate, asked what recruitment efforts the university had planned to bolster enrollment.

“We killed the fun,” Young said. “Some of the advertisements they put out — if I were a prospective student, I would think these are the ideal videos to show my grandparents.”

Young said the area and low cost-of-living should be attractive to students, but those points aren’t utilized during SIU recruitment efforts.

“[Enrollment] is everyone’s job,” Colwell said. “We need help from everyone, and there’s no one person to blame.”

Colwell said housing, marketing, retention and campus climate are all factors that impact enrollment numbers from year to year.

This school year is the first time in the last three that the admissions office has been fully staffed, the chancellor said, and recruitment visits to high schools across the state have been increased to try to boost numbers.

“It’s easy to dwell on the negatives,” Colwell said. “We need cheerleaders to promote the campus and the good things happening in this community.”

Francis Murphy, general manager of Neighborhood Co-op Grocery in Carbondale, asked what the university’s short- and medium-term plans are if the state fails to approve a full or temporary budget in the near future.

Colwell said the university is doing everything possible to control expenses by limiting hiring and cutting faculty, staff and assistantships where possible. A non-academic prioritization committee has also been formed to identify and make cuts to non-essential programs and units on campus, he said.

“There will come a time where we can’t just run on peanuts anymore,” Colwell said. “We’re not there yet, but we will run out of money eventually.”

Murphy also expressed concern that the Aug. 21 solar eclipse event, during which city officials said Carbondale is expected to receive anywhere between 30,000 and 50,000 visitors, would coincide with the first day of the fall 2017 semester and move-in dates.

Colwell said though the university will be open that day, there will be no classes.

“It would be a total zoo to have classes,” Colwell said. “But we want students to be here.”

Move-in dates were scheduled early so parents would have the chance to move their students in and leave town before the influx of eclipse-viewers arrive, Colwell said.

The university will remain open in the hope that the huge crowd will draw prospective students to campus during the event, he said.

“We’re doing everything we can to get people through our doors,” Colwell said. “We’re trying to put our triple best foot forward.”