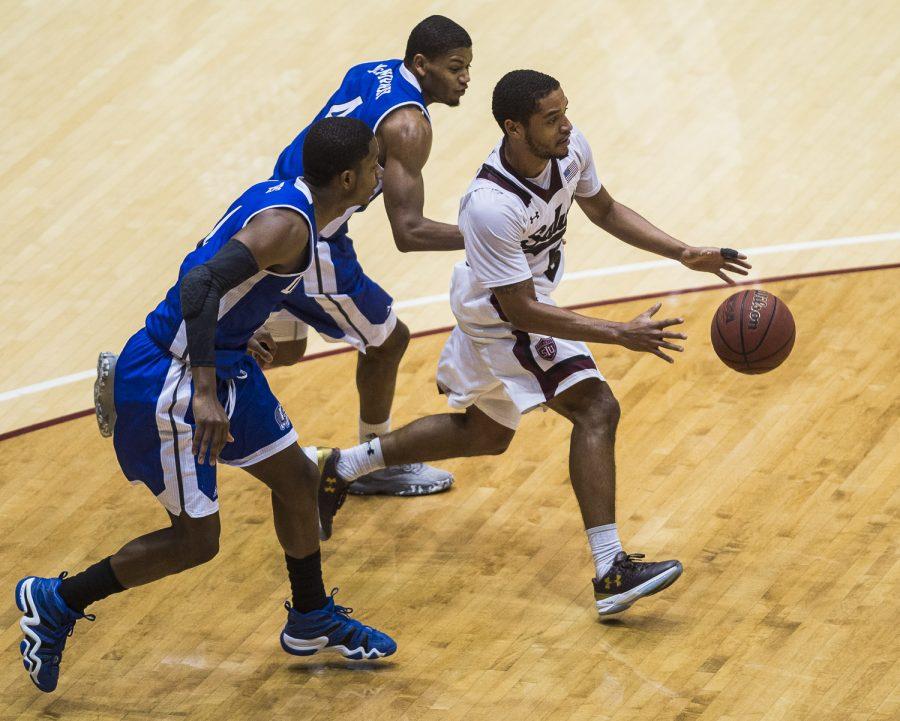 SIU was without its leading scorer, sophomore guard Armon Fletcher, because of injury and no single player stepped up in his absence. Instead, the entire team did.

Seven of the nine Salukis to enter the game Sunday outperformed their scoring average and helped push the team to an 83-69 victory against Drake.

Five Salukis scored in double-figures, including forwards Sean O’Brien and Thik Bol’s double-doubles. O’Brien had team-highs with 16 points and 13 rebounds while Bol added 13 points with 10 rebounds.

The lead traded hands five times before the Salukis decided to take over.

With the team already on a 5-0 run, freshman guard Aaron Cook stole an inbounds pass to score a layup, then stole the ball once again in the backcourt for two of his five steals. The run would end up being 14-3 for the Salukis to expand their lead to 12 with six minutes to go.

Cook was a huge boost off the bench with a career-high 11 points and three assists in addition to the aforementioned steals.

SIU’s bench was going to be a key factor in Fletcher’s absence and responded with arguably its best showing yet.

The Salukis were able to make their free throws down the stretch to keep the Bulldogs at arm’s length and seal the victory.

Defensively SIU was able to hold Drake’s offensive production to two players: junior guards Reed Timmer and Ore Arogundade. The duo had 30 of the Bulldog’s 69 points.

The first half, however, saw the two teams trading blows with each other with big runs on both sides.

The biggest haymaker of the half came at the end, when SIU scored 13 unanswered, punctuated with a Leo Vincent 3-pointer in the final seconds, to go into halftime with a five-point lead.

Vincent was the Salukis’ offensive spark plug in the first 20 minutes, making four shots behind-the-arc for 12 points. He would finish with five 3-pointers for 15 points.

Southern marched out to a 5-0 lead and traded points for a bit before the metaphorical punches started being thrown.

Drake then used a 9-0 run, seven of those points coming from junior forward T.J. Thomas, to take a six-point lead.

Thomas would end the game with nine points.

A 7-0 run by the Salukis cut the Bulldog lead to one, before Drake answered with one of their own to neutralize SIU’s.

Southern will get a couple days to rest before taking on Indiana State at 7 p.m. Wednesday in SIU Arena.