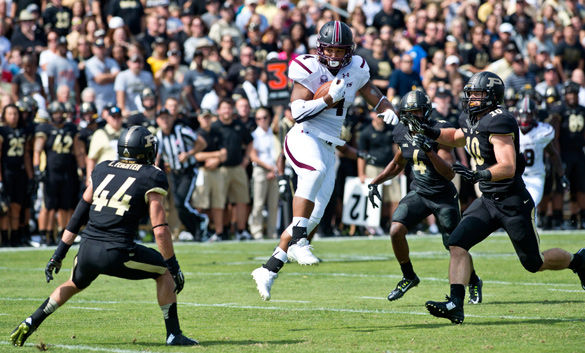 Then-SIU senior tight end MyCole Pruitt catches the ball for a first down Sept. 20, 2014, during the first half of the Salukis’ 35-13 loss against Purdue University at Ross-Ade Field in West Lafayette, Ind. (DailyEgyptian.com file photo)

Pruitt had been a member of the Minnesota Vikings’ practice squad before being signed by the Bears.

He was waived by the Vikings on Nov. 8 after struggling with a knee injury suffered Oct. 9.

He had 10 catches for 89 yards last season as a rookie after being drafted in the fifth round of the 2015 NFL Draft and had one reception this season.

The new Bear set the SIU career record for receptions (221) and is second in career receiving yards (2,601) and receiving touchdowns (25). All of those marks are Missouri Valley Football Conference records for tight ends.

Chicago will host rival Green Bay Packers this Sunday and Pruitt will close the season against his former employer when the Bears travel to Minnesota on New Year’s Day.