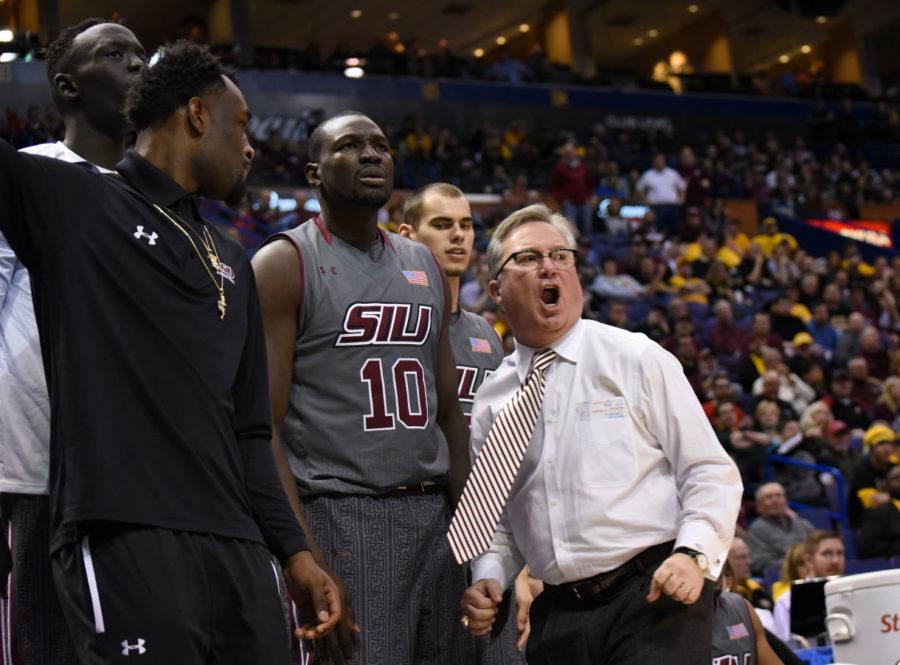 SIU coach Barry Hinson reacts to a call during the Salukis' 66-60 loss to Northern Iowa on March 4 during the Missouri Valley Conference Tournament in St. Louis. (DailyEgyptian.com file photo)

For SIU men’s basketball’s only game on finals week, the team will take part in the next installment of a local rivalry.

The Salukis will face off with the Saint Louis Billikens at 7 p.m. Wednesday in SIU Arena.

Saint Louis has struggled so far this season and will come to Carbondale with a 3-6 record under first-year coach Travis Ford. The three Billiken wins have all come against sub-200 RPI ranked teams in Southern Utah, Eastern Illinois and Chicago State.

But the Billikens have also challenged themselves early this season, facing Wichita State, Kansas State, BYU and Alabama. Outside of Alabama, all of those matchups were losses by 30 or more points.

The main reason for Saint Louis’ struggles has been its inability to perform on offense. Its field-goal percentage and scoring offense — 38.7 percent and 63.4 points per game, respectively — are both last in the Atlantic 10 Conference and in the bottom 20 teams in Division I.

Senior forward Reggie Agbeko is the only Billiken to make more than 45 percent of his shots this season, averaging 9.3 points per game. SIU has five players performing above that rate.

But Agbeko also has a strong ability to rebound shots, averaging 8.8 rebounds per game.

Sophomore guard Jermaine Bishop is the only double-figure scorer for Saint Louis at 11.6 points per game and is also the team’s main distributor with just more than four assists per game.

Besides those two, the rest of the starting lineup averages more than eight points per contest. The Billiken bench is where the offensive struggles begin. Only three Saint Louis reserves average more than one point per game, compared to five Salukis who do so.

With all the struggles that Saint Louis has offensively, it will be imperative for it to slow down the Saluki offense if it wants to win. In their most recent game, the Billikens were able to win because they limited Chicago State to 43 points in a 45-43 victory.

However, getting that type of defense consistently has been Saint Louis’ main problem. The Billikens have allowed 80 or more points in three of their nine outings, but have also held their opponents to under 65 points twice.

The Saluki offense will decide this game. If it can perform anywhere near its best, then the defense should be able to handle the job and SIU will finish the semester with a record above .500.

But, if it falters, then SIU could be headed to Las Vegas next week on a three-game losing streak to face an energized UNLV squad.