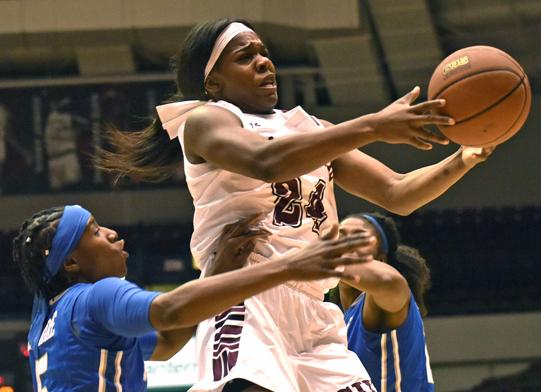 Every women’s basketball game is four quarters long, but sometimes only one makes the difference in a game.

SIU lit up Memphis for 18 points unanswered in the final 4:36 of the third quarter to help propel it to a 69-61 victory against the Tigers.

The Salukis (5-4) hit three consecutive 3-pointers — four overall — in the run to outscore the Tigers 24-9 in the third, taking a 10-point lead into the fourth. The run came just after Memphis (3-6) had taken an eight-point lead, its largest of the game.

“We were able to regroup at halftime and come out stronger, more committed to the game plan,” SIU coach Cindy Stein said. “Stuck together better, communicated better and I think it paid off in that big third quarter that put us over the hump.”

That quarter put an end to what had been a slow offensive game for SIU, which scored only 25 points in the first half.

SIU shot 45 percent in the first half, but was only able to get up 22 shots in the first two quarters — eight in the entire second quarter — because of Memphis’ ability to crash the offensive glass.

Tiger junior forward Cheyenne Creighton was able to walk away with a double-double thanks to her game-high 22 points and 10 rebounds, six of which were offensive.

“That’s disappointing that we’ve allowed the last two opponents to get so many rebounds,” Stein said. “We’ll get better with that but it can’t continue, obviously. When you have young kids, it’s always a work in progress.”

With the strong interior presence Memphis had, the Salukis took to the long ball to spark the offense.

Senior forward Carlie Corrigan started the third-quarter run with a 3-pointer as well as making two more in a row to start the fourth. She made four of her five shots from behind-the-arc to help her get a career-high 20 points.

“It was just a good day today,” Corrigan said. “I told Kylie that we have a good rotation going so we have to keep the flow and we’ll be good.”

Corrigan was only one of the shooters to find success in the game. In addition to 17 points of her own, senior guard Rishonda Napier dished out 11 assists for her second career double-double.

“I have a lot of confidence in our shooters and today they didn’t miss,” Napier said. “They actually made me look really good and I walked up to Kylie [Giebelhausen] and said, ‘Hey, keep making me look good.’ That’s exactly what her, Carlie and Kristen [Nelson] did in the third quarter.”

Despite the rough third quarter for the Salukis, Memphis would not go away quietly, cutting the Saluki lead to six points six times in the fourth quarter. But, SIU made each of its eight free throws in the final 1:25 to put the game away.

This is SIU’s second win in a row, and the team will now have a competition-free finals week before going to Kansas City, Mo., to compete in the UMKC tournament on Dec. 19 and 20.

Corrigan said without a game in the next seven days, the limited practice time because of finals week becomes even more crucial than usual to keep this momentum alive.

“Continuing our good practice habits is going to be the biggest thing,” she said. “We got a week off, all we have is finals. Staying in a rhythm is going to be huge because no one can take that much time off and not fall out of a rhythm.”