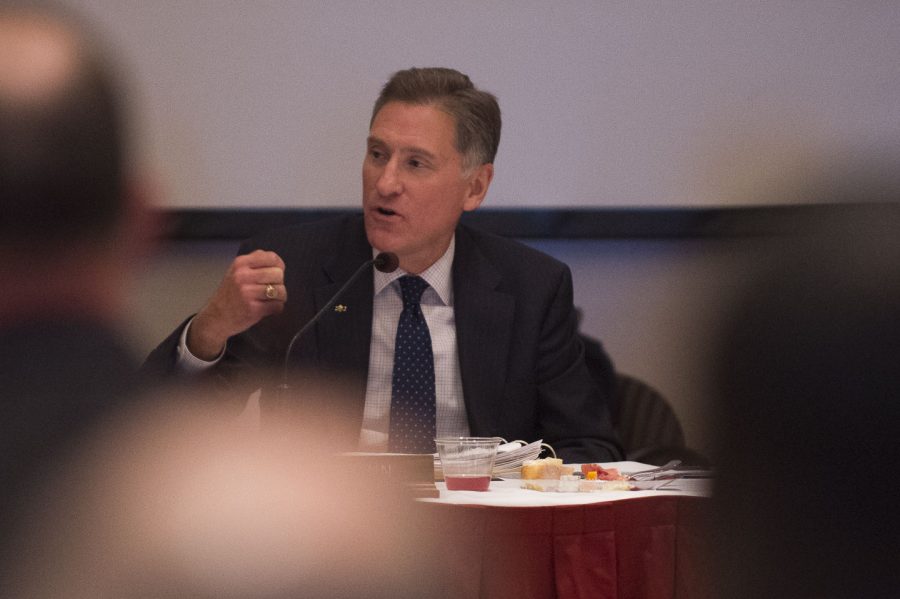 SIU President Randy Dunn makes a presentation Thursday, Dec. 8, 2016, during an SIU Board of Trustees meeting at the Student Center. (Ryan Michalesko | @photosbylesko)

The SIU Board of Trustees voted Thursday to table detailed planning of a $257 million housing project that would tear down the East Campus fixtures known as “the towers” and replace them with low-rise dormitories.

Trustee Joel Sambursky said he motioned to have the item removed from the board agenda because attractive, efficient and cost-effective housing “warrants a few more months of deliberation and discussion.”

“It is my deep, deep, deep desire that in February we come back and reconvene and put this baby to bed,” said Sambursky, the board’s secretary and chair of the architecture and design committee.

Approval of the proposal would have allowed for the development of detailed design plans for the phased construction of one or two new buildings. But some board members expressed concerns about how best to finance the project — not concerns about the project itself.

The measure prompted Undergraduate Student Government President Jared Stern to express his concerns to the board directly during a public comment portion of the meeting.

“[The towers] are not in good shape, as you’re aware of,” Stern said. “It’s damaging to current student morale and could potentially hinder further enrollment, including recruiting and retention.”

Mae Smith, Neely and Schneider halls house about 2,000 students. University officials contend the aging infrastructure of the buildings requires just as much money in upkeep as would new structures.

At a press conference after the meeting, board chairman Randal Thomas said board members recognize the need for new university housing, but want to further explore the option of using a public-private partnership to finance the project. He said he expects approval of a housing plan at the board’s next meeting in February.

“We will have lost a few months, but we will drive forward,” Thomas said, adding that the board spent much time discussing the proposal and ultimately left the decision in the hands of the committee assigned to review it.

The issue essentially comes down to cost and speedy building over the quality of building construction.

A report from Blue Rose Capital Advisors compared the costs of using public-private partnership with university-issued bonds to pay for the startup construction. That report indicated the cost of using a partnership with private investors to front the money would need to be $7 million cheaper for a lower debt financing cost.

The proposed housing plan would have gone through another year of detailed construction planning. Projections from administrators in University Housing estimated the completion of the first available rental spaces to be ready by Fall 2020.

But Dunn said a public-private partnership could get the project off the ground more quickly. He said the next steps will be to talk with the staff assigned to the project so they can start putting proposal information together.

The nine member board spent more than four hours Wednesday and two hours Thursday discussing various other topics, including the decision to allow on-campus booze sales, extend Dunn’s contract and discuss the future of the university if state funding does not come through soon.

The system president on Thursday said SIU could continue to face funding problems when the state’s temporary spending plan expires after December.

“We may be looking once again at almost a Groundhog Day effect of what we were dealing with about one year ago,” Dunn said.

The issue was not discussed at length during the public meeting, but Dunn said during the board’s Wednesday work session that receiving no state support is not financially possible.

“We cannot live without a stopgap,” Dunn said.

He expressed concern over state support for the university system, specifically noting comments Gov. Bruce Rauner made with regard to negotiating an Illinois spending plan.

The governor announced last week on Facebook his terms for negotiating spending after lawmakers adjourned for the year, saying he would only be open to considering another stopgap budget if the General Assembly passes legislation to implement term limits and freeze property taxes. The state has been without a full spending plan for 18 months.

The reforms proposed by the governor are part of a wish list he has consistently used as a contingent for making budget decisions. Rauner contends those reforms are necessary to send a signal to businesses that the state will be a better place for future investments.

Democrats led by House Speaker Michael Madigan argue that items from the governor’s so-called turnaround agenda are not budget related and should be negotiated after the state passes a full spending plan.

The board voted to extend the university system president’s contract through June 30, 2022.

Dunn, who became SIU’s eighth president on July 1, 2014, said in a statement Thursday that he “appreciate[s] the Board of Trustees’ confidence, as well as its leadership of our system.”

“I look forward to continuing our important work as we navigate this very challenging period in our university’s history,” he added.

The extension does not change Dunn’s $430,000 salary or any of his benefits, and does not include incentives or bonuses, according to a university news release. The board is allowed to sever its employment relationship with Dunn without cause prior to the end of the contract.

The board approved a $1 million donation from a university alumnus earmarked for renovation and expansion of the boathouse and pavilion on Campus Lake.

The university announced in a media release after the meeting that the new construction will be named after the donor, Ralph E. Becker. A 1955 graduate of the university’s speech communications program, Becker began his lifelong career in news media as a student worker in a number of university broadcasting jobs, including a radio-television column he wrote for the Daily Egyptian.

“I would not have been successful had I not attended SIU and it is a place where I call home,” Becker, a Carbondale native, said in the release. “It served as the foundation for what I was able to accomplish in life.”

The shuttered pavilion and boathouse have outdated plumbing from original construction and the renovation will bring it up to date with building codes, according to the release. Other additions include a classroom, new and additional site lighting and patio space.

Officials expect the construction to be completed by Spring 2018.

In a statement Thursday, interim Chancellor Brad Colwell said the donation will “revitalize this beloved and significant landmark.”

“We are deeply grateful for Mr. Becker’s extension of his longtime support of his alma mater,” he added.

The endowment from Becker comes as the university recently invested $350,000 into draining Campus Lake in order to remove 46 million pounds of decomposing plants that had built up over the years. The draining process began in September and was closed to the public on and off in recent years because of concerns related to increased levels of cyanobacteria.

The board also approved a new policy permitting the sale of alcohol for profit at campus events after months of advances from university officials to change state law.

Both SIU campuses held licenses to host caterers that carry alcoholic beverages, but Illinois law prohibited direct sale until new legislation was enacted in August. The new policy opens the door for the university to sell alcohol at campus-sanctioned activities like sports games and concerts.

“This would be going to a public event that’s on the campus where we do the selling with trained employees under pertinent statutes and keep the revenue,” Dunn said.

The policy gives chancellors of SIUC and SIU-Edwardsville and the provost of the School of Medicine the authority to create or amend policies for sale at individual events. Written permission from the appropriate administrator is necessary to sell alcohol on SIU-owned properties.

Dunn said the next step will be for campus level university officials to begin crafting the policy to ensure alcohol is sold safely and responsibly.

Campus editors Bill Lukitsch and Anna Spoerre can be reached at 618-536-3326 or at [email protected].