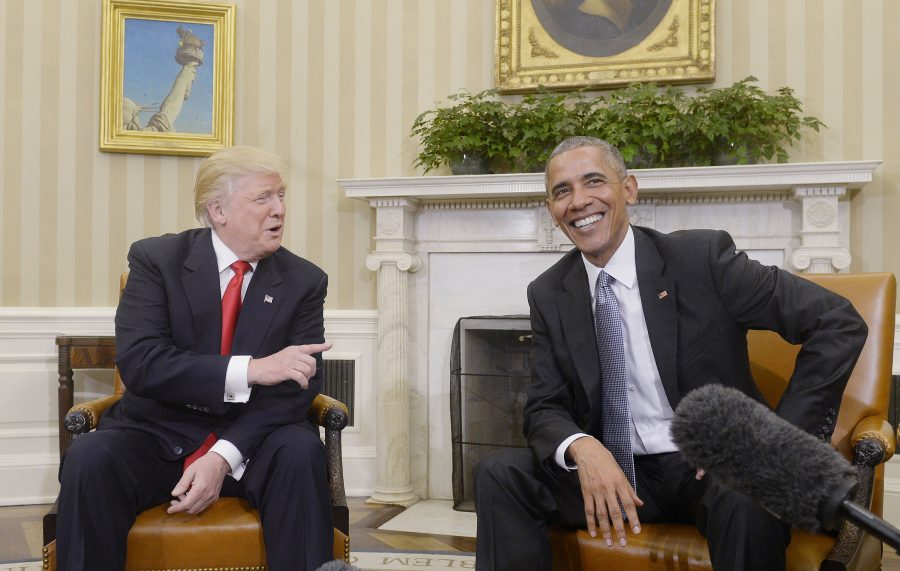 U.S. President Barack Obama meets with President-elect Donald Trump on Thursday, Nov. 10, 2016, in the Oval Office of the White House in Washington, D.C. in their first public step toward a transition of power. (Olivier Douliery/Abaca Press/TNS)

By W.J. Hennigan and Michael A. Memoli | Tribune Washington Bureau

WASHINGTON — President Barack Obama secretively built a massive counterterrorism apparatus, and now he’s confronting the consequences of expanding his war-making powers: handing them over to a man he said was unfit to serve as commander in chief.

With President-elect Donald Trump weeks away from inheriting them, Obama has taken a new approach, advocating for limits and transparency that he often was content to do without.

In a speech Tuesday, Obama defended his approach to national security and explained the legal and policy underpinnings that his administration used to decide whether and how to detain, interrogate or kill suspected terrorists. The White House also released a 66-page report that offered a view into some of the nation’s most sensitive national security issues, including Obama’s signature tool to fight terrorism: harnessing armed drones, human intelligence and electronic surveillance to “find, fix and finish” thousands of Islamic militants in remote corners of the globe.

“This public information allows for a more informed public debate and it provides a potential check on unfettered executive power,” Obama said in his address before an audience of troops at the military’s Central Command in Tampa, Fla. “The power of the presidency is awesome, but it is supposed to be bound by you, our citizens.”

The efforts at transparency were striking for an administration criticized for being secretive by news and watchdog organizations; Obama has used the Espionage Act more times than all other U.S. presidents combined to investigate leaks of government information. White House aides said Obama was seeking to set an example for accountability.

“That’s even more important given the kind of open-ended nature of the conflict against terrorism,” deputy national security adviser Ben Rhodes told reporters, adding that the president had sought but not always received greater congressional involvement in fighting war — notably through his request for an updated mandate for military action against Islamic State extremists.

Advocates of greater transparency welcomed Obama’s gesture, but expressed concern at the precedent he set by continuing to assert his authority for expanded counterterrorism operations under the broad authorization for the use of force that Congress passed after 9/11, years before the Islamic State and other terrorist groups even existed.

Rep. Adam B. Schiff of California, the top Democrat on the House Intelligence Committee, called that “expansive interpretation” an “unfortunate legacy” of the Obama administration.

As he prepares to depart office, Obama made a more forceful push for a new law that more carefully defined presidential power.