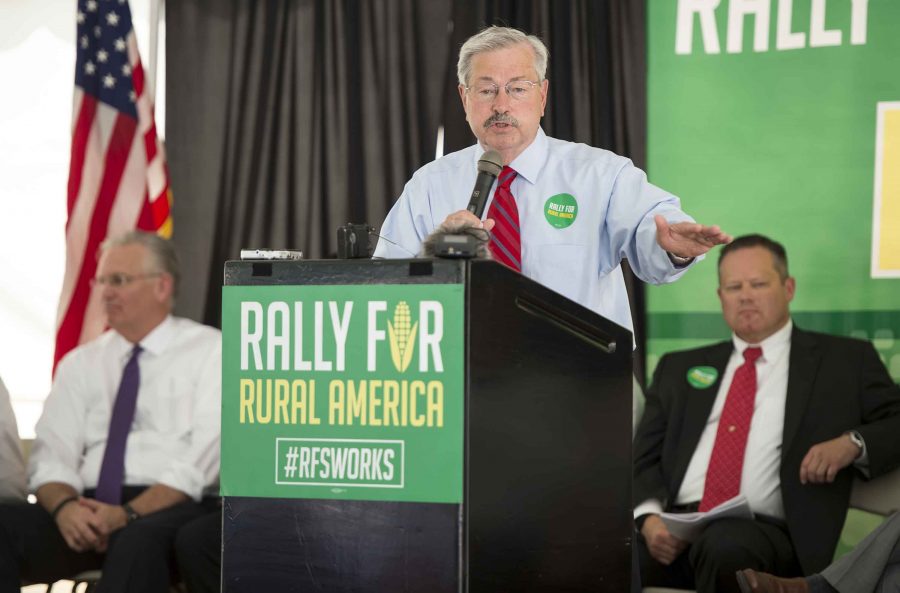 Iowa Gov. Terry Branstad, center, with Missouri Gov. Jay Nixon, background left, at a rally in support of agricultural use for ethanol production as a stimulus to Midwestern states. (David Eulitt/Kansas City Star/TNS)

WASHINGTON — President-elect Donald Trump has offered the post of U.S. ambassador to China to Iowa Gov. Terry Branstad, a longtime friend of Chinese President Xi Jinping, according to three people close to the matter.

Branstad, a Republican, has accepted the offer, said the three people, who asked for anonymity. The decision comes at a time of heightened tensions with China after Trump abandoned almost four decades of diplomatic protocol on Dec. 2 by speaking directly with the leader of Taiwan, which Beijing considers a rogue province.

Trump has been critical of China’s currency policies and military build-up. He hasn’t named his choice for secretary of State, the top U.S. diplomatic post.

The longest-serving governor in U.S. history, Branstad, 70, started a second run as governor in 2011. He previously held the job from 1983 to 1999. Branstad’s friendship with Xi may be one of the reasons Trump picked him for the ambassador post.

Two days before the Nov. 8 presidential election, during a rally in Sioux City, Trump singled out Branstad as an ideal liaison to China.

“You would be our prime candidate to take care of China,” Trump said in calling the governor to the stage.

Branstad and Xi met when China’s leader made his first trip to Iowa in 1985 during a sister-state exchange. At the time Xi was a young agricultural official from Hebei province, working as director of the Feed Association of Shijiazhuang Prefecture. The two men have reconnected several times since then.

Despite their cultural differences, the pair forged strong bonds and have used their mutual love of agriculture to bridge the gap between their respective countries on human rights, economic issues and other tensions. Branstad in 2012 feted Xi, then China’s vice president, with an elaborate dinner at the Iowa Capitol in Des Moines, and days after Trump’s election embarked on a previously planned, week-long trade mission to China and Japan, his fourth trip to China in the last seven years.

Branstad, unlike some establishment Republicans in other states, was an enthusiastic backer of Trump even during some of the most difficult spells during the campaign. The governor’s older son, Eric, served as state director for Trump’s campaign.

Iowa favored Trump by about 9 percentage points over Democrat Hillary Clinton, after twice voting for President Barack Obama. Trump carried Iowa by the largest margin for a Republican since Ronald Reagan in 1980.

China is Iowa’s second-largest export market, behind Canada. Figures from the U.S.-China Business Council show Iowa exported $2.3 billion in goods and $273 million in services to China in 2015. Crop production accounted for $1.4 billion of the exports. Agricultural machinery, chemicals and other products were also sold.

Among the main challenges facing the new ambassador will be Trump’s potential trade policy, including a vow to name China as a currency manipulator; state-sponsored computer hacking; and tensions surrounding China’s territorial claims in the South China Sea.

If Branstad is confirmed, it would trigger a domino effect in the state that would include Iowa getting its first female governor with the ascension of Lt. Gov. Kim Reynolds, 59, Branstad’s desired political heir.

Kevin Cirilli contributed to this report.