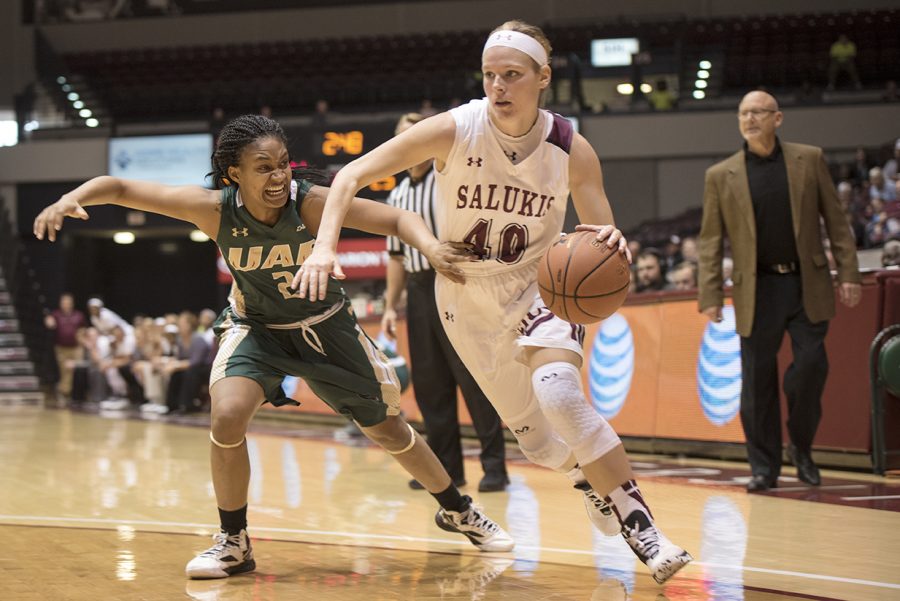 SIU women’s basketball was unable to go above .500 on the season Saturday with a 64-49 defeat to UAB.

The Salukis struggled on both ends of the floor, shooting 34.5 percent and allowing the Blazers to shoot 43.4 percent.

After the game, SIU coach Cindy Stein called her team’s performance “a comedy of errors.”

The first half was an offensive struggle for the Salukis. SIU shot just 9.1 percent from long-distance.

Senior guard Rishonda Napier hit the first and only 3-pointer of the first half with 41 seconds left in the second quarter.

Her shooting woes continued Saturday, making four of 18 shots from the floor, getting visibly frustrated at the times on the bench.

“She’s just putting too much pressure on herself,” Stein said. “I think at times she tries to do too much to get us going. Last year, she had help. This year, she’s not getting a lot of help.”

Like Stein mentioned, she wasn’t the only Saluki to struggle.

SIU’s starting five made seven of 22 attempted shots in the first half.

The big scoring trio of Napier, junior guard Kylie Giebelhausen and senior forward Carlie Corrigan all struggled through the entire game. They combined to shoot 8-36 overall and 2-15 from deep.

“When the guards aren’t hitting shots, you got to get the ball inside and we just turned the ball over trying to get it there,” Stein said.

Her team turned the ball over 12 times in the game, which UAB turned into 12 points.

The Salukis were in a five-point hole at the end of the first quarter and were able to cut the Blazer lead to one before sophomore guard Deanna Kuzmanic caught fire.

She scored eight straight points for UAB, including two quick 3-pointers within 45 seconds of each other. Those eight points would lead the team in the first half, finishing with 13.

UAB repeatedly attacked the rim with its guards in the third quarter. The Blazers outscored the Salukis 32-24 in the paint, but UAB’s forwards only scored a combined 15 points.

A big fourth quarter helped put the Salukis away for good.

After scoring the final basket of the third quarter, UAB continued to go on a 9-0 run to extend its lead to 14.

That hole would be too large for the Salukis to climb out of.

SIU’s next chance to break its slump will come at noon Friday when it faces SEMO at SIU Arena.