Rodriguez is stepping up big for Saluki basketball 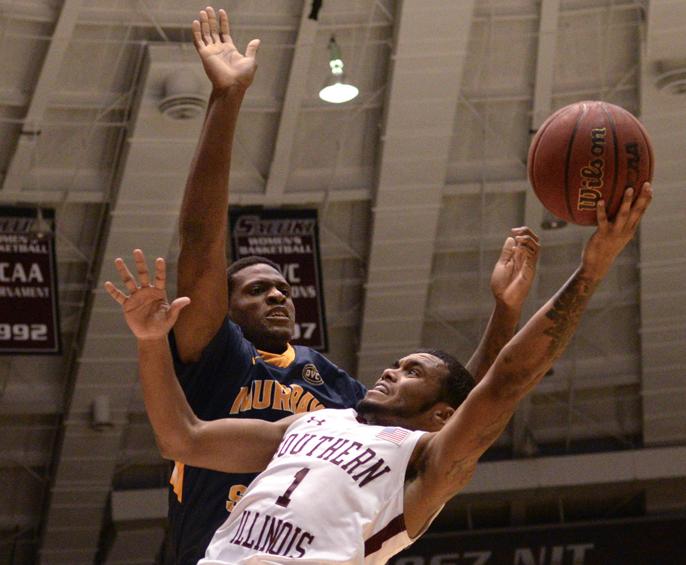 Senior guard Mike Rodriguez gets fouled as he goes to the rim during the Salukis' 89-85 win against Murray State on Tuesday, Nov. 29, 2016, at SIU Arena. (Sean Carley | @SCarleyDE)

Last year, senior guard Mike Rodriguez came to SIU as a pass-first point guard. That has changed early this season.

While he is still the team’s main distributor, all his statistics have improved.

He is currently leading the team in scoring and assists with 14.4 points and 5.3 assists per game. Those numbers rank him 10th in scoring and third in assists in the Missouri Valley Conference.

Rodriguez averaged 8.3 points and 2.9 assists while shooting 41.7 percent from the field.

The Saluki point guard said he stayed on campus to improve his game in preparation for his final run as a collegiate athlete.

“I didn’t go home [all summer],” Rodriguez said. “I just worked on every part of my game. When you work so hard, you’re confident in yourself and that’s where I am right now.”

One reason for the increase in his production could be his new mode of operation as a slasher.

“He’s just hard to guard,” coach Barry Hinson said. “I know everybody’s scouting report is to keep him in front of you and don’t let him get downhill. They guard him and he’s a central focal point.”

With his preferred mode of scoring requiring contact, Rodriguez is putting his body on the line and his high octane play had recently caught up with him.

Rodriguez started the season strong, putting up his career-high 29 points against Wright State after not playing in any of SIU’s exhibition games and not practicing in weeks because of a knee injury.

He also takes the offense more into his own hands this season after being named a team captain before the season.

“These guys, I don’t want to say they follow me, but if I say something they listen,” Rodriguez said. “I would never steer these guys wrong. That’s just my personality. It’s my final season, so why not go out with a bang?”

But Hinson said that sometimes Rodriguez’s desire to win can be his own enemy.

“When he’s not sped up, and there are times he got sped up, he’s hard to guard,” Hinson said.

The most recent coach to have to gameplan against Rodriguez had high praise for him.

“He’s really hard to guard,” Murray State coach Matt McMahon said. “His speed off the dribble — he’s very crafty using the ball screens. He can dance behind the screen, and if he’s hitting his 3-point shot he’s a really difficult cover.”

Rodriguez’s next chance to lead the Salukis will come at 4 p.m. Saturday against Texas Southern at SIU Arena.