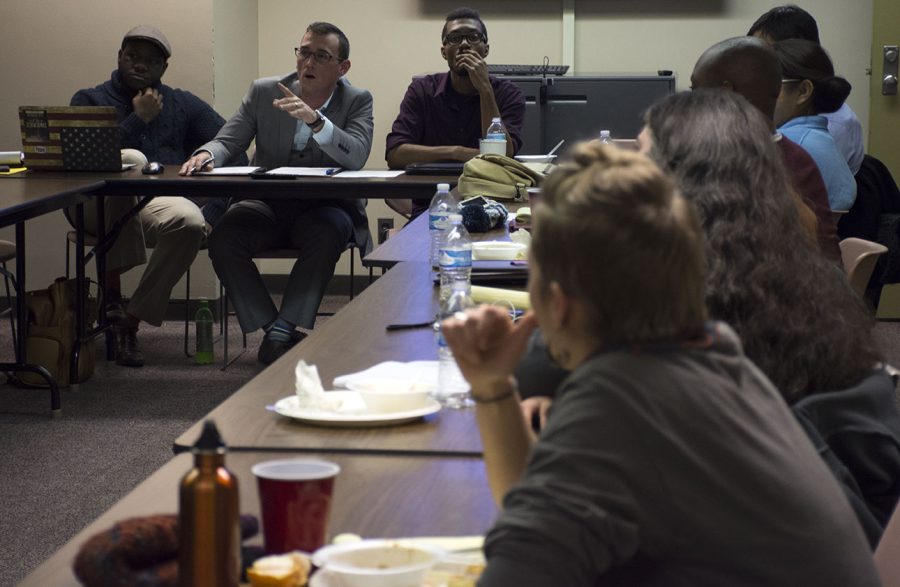 Members of the Graduate and Professional Student Council discuss buisness at that their bi-weekly meeting on Tuesday, Nov. 29, 2016 at the Student Center. (Athena Chrysanthou | @Chrysant1Athena)

The letter, which was jointly drafted by GPSC’s Diversity and Inclusivity Policy Committee and Undergraduate Student Government’s Diversity and Equity Affairs Committee, was written in response to President-elect Donald Trump’s plan to revoke the DACA program in the first 100 days of his presidency.

DACA was an executive action signed by President Barack Obama in 2012. It was designed to give undocumented immigrants who came to the United States before they turned 16 years old protection from deportation and to grant them work permits.

In the letter, the two committees ask university administration to declare the university’s “support for and protection of undocumented people and their families on our campus” by refusing to comply with immigration authorities should raids occur, centralize DACA support services into one office for easier student access, train faculty and staff in de-escalation techniques and publicize campus-wide anonymous hate-speech reporting mechanisms.

“This is creating a false sense of security,” GPSC member Jon Howard said. “This paper is not going to stop any federal officer from coming onto campus and arresting an illegal immigrant.”

Howard said the letter would be more harmful than helpful to DACA students because it lumps all immigrants on campus together, making it seem like DACA students and immigrant students — even those here on student visas — face the same consequences from the incoming presidential administration.

It’s also hard to tell whether Trump would follow through with his claims, he said.

“We’re sitting here building off the fears and emotions of things that might not even happen,” Howard said.

GPSC president Brandon Woudenberg took issue with this, saying that the council’s job is not to delegitimize the fears of their constituency and the campus in general.

“At the end of the day, we’re here to support the social welfare of all the students,” he said.

Woudenberg said the letter is meant to serve as a symbol of support for DACA students.

Law student Sheena Hart said the use of the word “undocumented” throughout the letter is problematic and places DACA students in a negative light. GPSC vice president for student affairs Johnathan Flowers later pointed out that the university uses the word undocumented to describe DACA students, which he said helps explain its usage in the letter.

Various members also had a problem with the letter being published on the GPSC Facebook page and website before being brought before the body, saying the action implies that the body already approved its content.

Others said the support the letter shows for these students justified posting it, even if the language is imperfect.

“It should be a no-brainer,” member Donald Chamberlain said. “We have people in this country that genuinely fear for their life. To put down a person’s fear is absolutely reckless.”

Ultimately, the council voted to send the letter back to the GPSC committee in order to change the language but preserving the supportive message. The revised letter would then go before the joint committee to agree on the revisions.

If no agreement can be reached by the two committees, a separate document will be drafted to reflect GPSC’s opinions only. Once a final document is approved, Woudenberg will bring it before the SIU Board of Trustees at their Dec. 8 meeting.

“Whatever happens, we just want to put our best foot forward,” Woudenberg said.