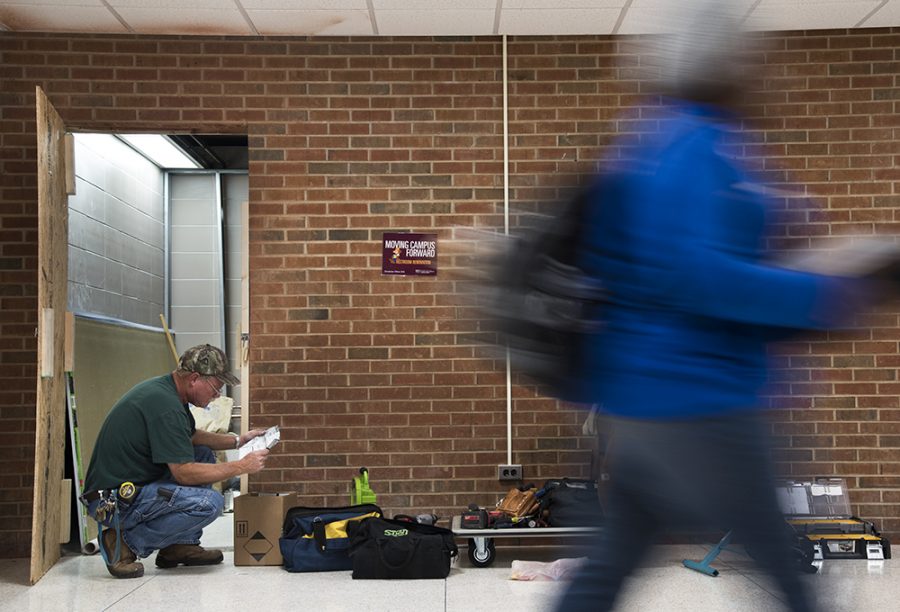 Gender-neutral bathrooms are being built in Grinnell Hall and Trueblood Hall in response to student requests, a measure administrators within the university’s housing department hope will accommodate students.

Jon Shaffer, director of University Housing, said the bathrooms — which will consist of one toilet, a sink and changing table — will be available for public use early in the spring semester, though he did not have an exact date. Shaffer said up to $30,000 was approved for the construction.

“This construction is seen as a great first step toward safety for all students,” said Travis Tucker, a student coordinator at the LGBTQ Resource Center.

In Fall 2015, students petitioned the Residence Hall Association to begin the construction of the bathrooms, a measure that made administrators “more than eager” to create them, Shaffer said.

While the bathrooms were made with transgender students in mind, the facilities will be open to everyone. The choice to designate the restrooms as gender-neutral rather than transgender is done to make people feel safer, said Les Delgado, a vocal supporter of the construction.

Delgado, a student worker at the LGBTQ Resource Center, said it “makes sense to not call the bathrooms ‘transgender’ for fear of harassment.”

The new restrooms are a step toward what Delgado said is a continuing effort by the LGBTQ Resource Center to install gender-inclusive bathrooms on campus. The resource center wants to install one in the Neckers Building as well, Delgado said, but funding has been an issue.

Shaffer said the biggest hitch has been the aging infrastructure. He said most of the construction is being done by SIU staff, but outside contractors have been brought in for some of the specialty work.

The up to $30,000 cost is accounted for through an annual $3 million to $5 million maintenance budget of campus facilities, Shaffer said.

These gender-neutral bathrooms are not the first to be built on campus. All-gender-inclusive restrooms were built in the Student Recreation Center in 2012, said Troy Vaughn, director of the recreational center. He said the bathrooms have had a positive effect on the campus, and as far as he knows, there have been no complaints from visitors of the recreational center.

“The end goal is to make people feel more comfortable using the facilities on our campus, no matter their gender,” Vaughn said.