Attacker who wounded 11 at Ohio State University was a student 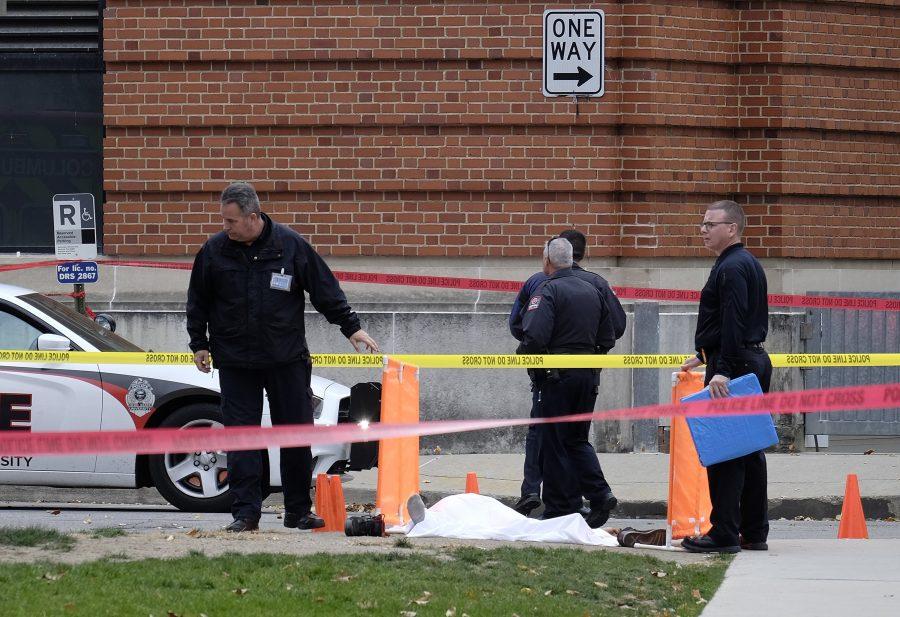 Police cover the body of a suspect along 19th Avenue outside Watts Hall on Ohio State's campus following a vehicular assault and stabbing on Nov. 28, 2016 in Columbus, Ohio. (Adam Cairns/The Columbus Dispatch/TNS)

The man who drove a car into a crowd of students at Ohio State University on Monday and then attacked bystanders with a butcher knife, injuring at least 11, has been identified as a student at the university.

The suspect, Abdul Razak Ali Artan, who authorities said was about 20 years old, was shot and killed by a university police officer who arrived and brought down the attacker within a minute, officials said.

“This happened right before his eyes,” campus Police Chief Craig Stone said of Officer Alan Horujko, 28, who had been in the area on another call.

In a previous news conference, Stone said Artan had not “followed” the officer’s commands, and “the officer did what he had to do to end the threat.” Local officials have not suggested a motive for Artan’s actions, and Ohio Gov. John Kasich urged caution while the investigation unfolds.

“It’s our job to let the investigation take its due course, and at the end of the day we’ll find out what happened,” Kasich said. “We may never find out (why), but we’re going to have a lot more information. … Right now we have to have patience.”

After receiving a briefing on the attack, U.S. Rep. Adam B. Schiff, D-Calif., the top Democrat on the House Permanent Select Committee on Intelligence, said the incident “bears all of the hallmarks of a terror attack carried out by someone who may have been self-radicalized.” His office declined to release more information on how he reached that conclusion.

“The intelligence community is providing all necessary information and support to law enforcement as they investigate this individual’s motivations and background, and we hope to know much more very soon,” Schiff said in a statement.

An anonymous U.S. official told The Associated Press that Artan was born in Somalia and was a permanent U.S. resident. In an interview given to the Lantern campus newspaper in August, Artan said he was a Muslim and a new transfer student. Citing negative portrayals of Muslims in the media, he said he was confused and “scared” about where to pray on campus.

“I just transferred from Columbus State. We had prayer rooms, like actual rooms where we could go to pray because we Muslims have to pray five times a day,” Artan told the Lantern.

“I wanted to pray in the open, but I was kind of scared with everything going on in the media,” Artan said. “I’m a Muslim, it’s not what the media portrays me to be. If people look at me, a Muslim praying, I don’t know what they’re going to think, what’s going to happen.”

Artan said he decided to pray in a corner.

At least 11 people were treated for injuries at three hospitals, but none of the victims’ injuries was considered life-threatening, said Andrew Thomas, the chief medical officer for the Ohio State University Wexner Medical Center in Columbus.

The victims were primarily undergraduate and graduate students, and one was a faculty member, Thomas said. The injuries appeared to be evenly split between victims who had been hit by the car and those who had been injured by knife.

One victim came forward later because she had been “hiding in place,” Thomas said. She had been comforted by other students as they hid, university President Michael V. Drake said, and another victim had been driven to the hospital by another student, a stranger who had decided to help.

Footage published by the Lantern showed a young woman walking toward an ambulance with a pair of medical officials, holding what appeared to be an injured arm in the air.

The attack happened at 9:52 a.m., and less than five minutes later, university officials sent out a warning to students on campus: “Active Shooter on campus. Run Hide Fight.”

Police later said the attacker did not appear to have a gun and that he appeared to have acted alone.

“The guy ended up just coming and hopping the curb with his car and trying to mow down a couple people,” Jerry Kovacich, a third-year student in welding engineering, told the Lantern. “He lost control, and I think he ended up hitting three people, and then people were around the car. Somebody asked him if he was OK and the guy just hopped out of the car with a butcher knife and starting chasing people around.”

“We believe injuries were minimized as a result of that,” said Monica Moll, the university’s public safety director.

The attack prompted a campus lockdown as police searched the area for possible other suspects, but the shelter-in-place order was lifted less than two hours later.

Officials said they were still waiting on a warrant to search a property associated with Artan. The FBI and the Bureau of Alcohol, Tobacco, Firearms and Explosives are assisting with the investigation.