Dawgs hang on for signature win 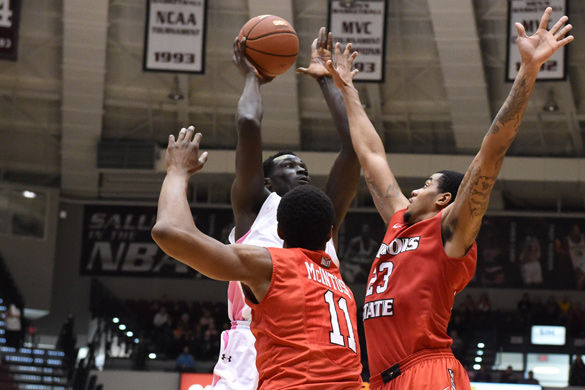 Both teams were going back and forth in the first half. It was tied 7-7 early.

The second half was no different.

The Redbirds tied the game 55-55 with 2:10 remaining. ISU took a 57-55 lead with 1:29 remaining off two free throws from senior guard Daishon Knight. The game was tied again 59-59 with one minute to go. Illinois State turned the ball over three times in the last minute and the Dawgs capitalized.

“We got what we deserved that game,” Illinois State coach Dan Muller said. “It was the least competitive game we’ve played all year.”

Saluki coach Barry Hinson said he is tired of people saying the team cannot close out games. This was a signature win, he said.

“We’ve got no shot at playing a 40-minute game. None. Throw that out,” Hinson said. “It’s like telling my grandson, ‘You have to sit there and be quiet for four minutes, it ain’t happening.’”

“[Beane] was terrific tonight,” Muller said. “We couldn’t guard him.”

The Salukis play the Loyola Ramblers at 7 p.m. Wednesday at Joseph J. Gentile Arena in Chicago.