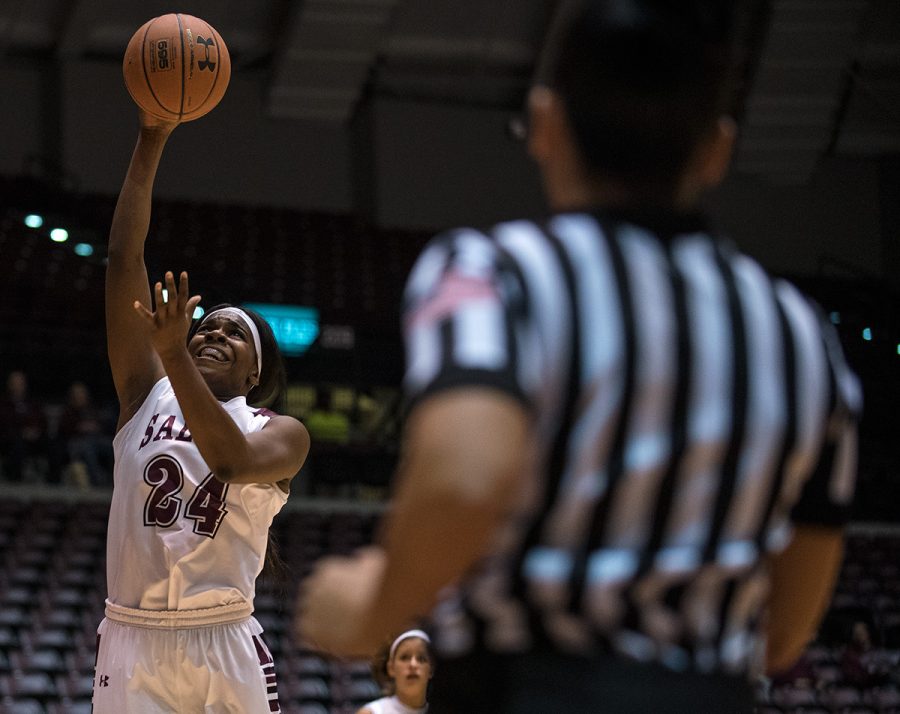 SIU women’s basketball was able to secure its first win of the season Friday, putting away Murray State by 70-63.

Meanwhile, senior forward Kim Nebo had a monstrous second half with 10 points and nine rebounds to help SIU put the game away. She finished with 17 points and 11 rebounds for her third career double-double.

“Kim Nebo really stepped up,” SIU coach Cindy Stein said. “I think everyone kind of expects Kylie to score but she altered a lot of shots tonight, which was a beautiful thing. But the play of Nebo on the glass, getting the putbacks late in the game and being a beast on the boards. I think that was critical.”

The matchup had the makings of a heavyweight title fight throughout the night. SIU and Murray often matched each other punch for punch.

A couple alternating runs gave Murray a 7-4 lead in the first. Neither team had a lead larger than three points before finishing the quarter with the Racers ahead, 17-16.

Junior forward Ke’Shunan James was the Racers’ spark plug early with eight first-quarter points. However, Giebehausen was able to answer with seven of her own.

SIU looked stronger in the second, building up a seven-point lead before Murray State went on a 9-0 run to take the lead. The game would go into halftime tied at 33.

“I feel like we got a lot tougher as the game went on,” Stein said. “This is a team where we’ll get better and better. We’re not obviously fine-tuned yet, but we’ve got a lot of pieces.”

All the points in the run were scored by James, senior guard LeAsia Wright or junior guard Jasmine Borders. Those three would do most of the Racers’ damage all night, scoring 47 points combined.

The Salukis were able to stick around while senior guard Rishonda Napier and senior forward Carlie Corrigan struggled to put the ball in the basket. They combined to make just two of 22 shot attempts in the game.

“It’s encouragement that we don’t need seniority, we don’t need upperclassmen to finish games,” Giebelhausen said. “We need everybody. We’re not going to rely on one person this year. Everybody on the floor can do special things.”

The third quarter was Murray’s turn to take a sizable nine-point lead before the Salukis crawled back, eventually taking the lead on Napier’s only field goal of the night.

SIU was able to hold on to that lead for a majority of the final quarter and hit six out of eight free throws down the stretch to seal the victory.

Freshman forward Lauren Hartman asserted her presence in the fourth, picking up four of her game-high 12 rebounds in the quarter.

“Hartman was getting bounced around down there like a pinball,” Stein said. “She finally held her ground and got up and got some rebounds … with determination. That’s a kid growing up in front of your very eyes because she’s one of the nicest kids around.”

The Dawgs will face its second Power 5 opponent in three games at 1 p.m. Sunday when they face Purdue in West Lafayette, Ind.