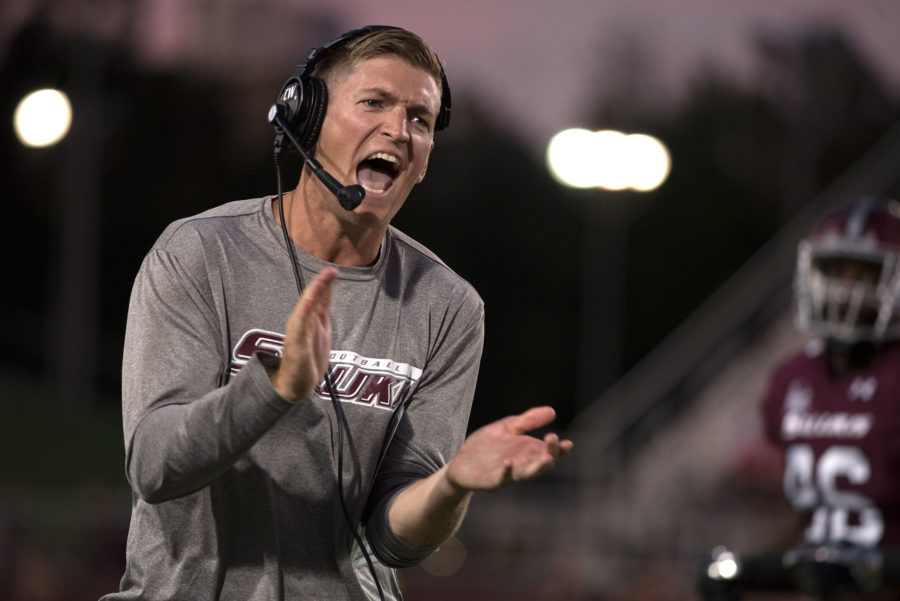 Fresh off its first Missouri Valley Football Conference win of the season, SIU football will have one of its toughest tests to date.

The Salukis will travel to Stambaugh Stadium — affectionately called the “Ice Castle” — to face the No. 17 Youngstown State Penguins at 11 a.m. Saturday.

This matchup will pit strength against strength when SIU’s offense is on the field.

Youngstown State (6-3, 4-2 MVFC) has built itself as a defensive powerhouse under coach Bo Pelini.

“They’re just a really good defense,” SIU coach Nick Hill said Monday. “They get you in a lot of predictable down and distances. They can do a lot of things on defense because they have two pass rushers that are good.”

Hill is talking about senior defensive ends Avery Moss and Derek Rivers, who are tied for No. 4 in the Football Championship Subdivision in sacks with nine each. As a team, YSU leads the nation with 34 sacks.

Moss and Rivers are also No. 2 and No. 5 in the conference with 10.5 and 10 tackles for loss, respectively.

However, they are just two players of a complete defense that has allowed the eighth-fewest yards in the country at 281.9 per game.

The Penguins also keep their opponents off the scoreboard. Only one opponent, Big 12 member West Virginia, was able to score more than 24 points on YSU. Its 16.4 points per game allowed is sixth-best in the FCS.

Youngstown State is an enigma on offense though.

Four Penguin quarterbacks have seen playing time and each has played in at least two games. SIU will have to prepare for just three as junior Trent Hosick is out for the season recovering from a broken collarbone.

“Just like all quarterbacks, they’re not all the same,” Hill said. “They’ve all played a lot. It’s the end of the season so they all have a grasp on things. We’ll be ready for whichever one they put out there.”

Junior Hunter Wells has started the last two games for YSU, completing 58.5 percent of his passes with three interceptions and no touchdowns. Fellow junior Ricky Davis made six starts at the beginning of the season with 864 yards and five touchdowns to five interceptions.

Redshirt freshman Nathan Mays has also appeared in five games with a role similar to SIU sophomore Matt DeSomer with 20 rushes to his 14 pass attempts.

With limited production from the quarterbacks, YSU’s running backs have been the driving force of the Penguin offense. Seniors Jody Webb and Martin Ruiz have split time in the backfield, totaling 1,084 yards and seven touchdowns.

Sophomore Tevin McCaster also receives frequent touches, with 390 yards and five touchdowns of his own.

YSU runs more than two rushing plays to every passing play on offense, which allows the Penguins to keep the clock running and hog the ball. They hold on to the ball for 33:33 every game on average, more than any other team in the conference.

The key matchup of this game will be SIU’s offensive line. If it can step up and give sophomore quarterback Sam Straub time to operate, then an upset is fathomable. If it doesn’t, then SIU will be in for a long afternoon in sub-50 degree temperatures.