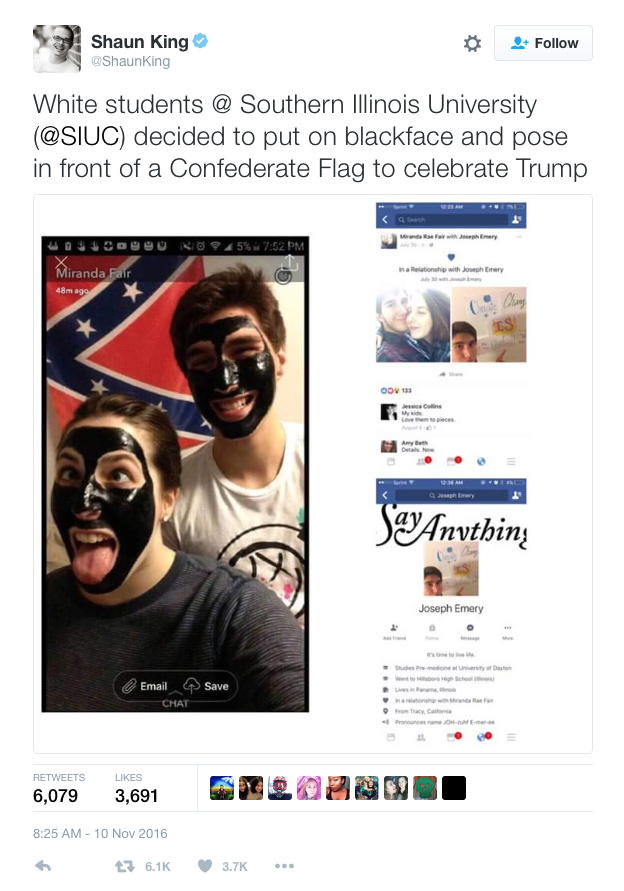 A racially offensive photograph that appears to have originated from the social media account of an SIU student went viral on Thursday.

The picture shows a man and woman standing in front of a Confederate flag in what appears to be blackface makeup. It circulated widely on both Facebook and Twitter after a columnist from the New York Daily News shared the image on Twitter.

As of Thursday evening, the image had been shared more than 11,000 times and liked 8,000 times on Twitter.

Miranda Fair, one of those apparently shown in the photograph, is a sophomore in the university’s hospitality and tourism program. The man, identified through social media as Joseph Emery, is not enrolled at the university.

Fair posted a message in a private Facebook group Thursday morning, saying she wanted to “sincerely apologize if this has offended anyone.”

She said the photograph was taken out of context and the flag in the background is ripped in half because she does not support it. The mask, she explained, is a facial exfoliation mask used for skin care. 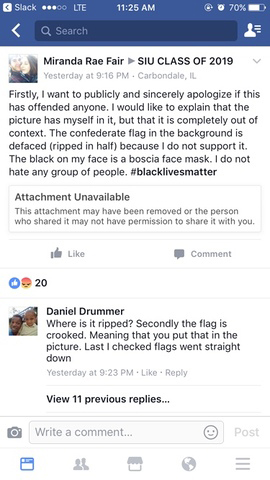 The columnist who shared the photograph on Twitter, Shaun King, labeled it as a celebration of the election of Republican Donald Trump to the nation’s highest office. There is no indication that is the case.

In a statement Thursday afternoon, interim Chancellor Brad Colwell condemned the use of social media and other offensive behavior as a reaction to the presidential election. Any incidents will be taken under review and acted upon appropriately, according to the statement.

“We value individuals, diversity and inclusion,” Colwell said. “Anything less diminishes all of us. Free speech is an important right and value that we should use wisely and respectfully.”