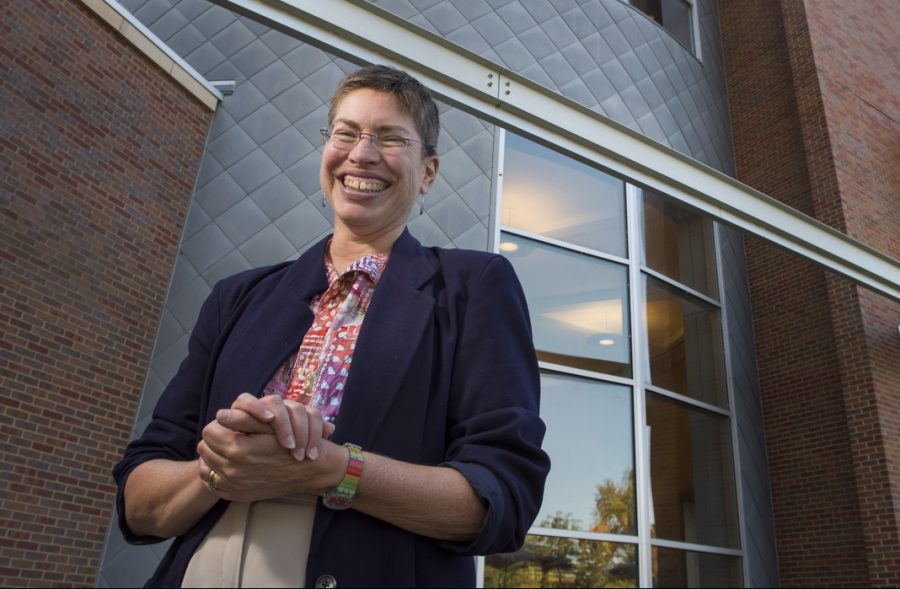 Her father, the late U.S. Sen. Paul Simon, rose through the political ranks from modest beginnings as an Illinois state representative in 1955. Halfway through his first term as a U.S. Senator, he eventually made a bid for the 1988 Democratic presidential nomination.

Though this bid was ultimately unsuccessful, Illinoisans — particularly southern Illinoisans — maintain a special place in their hearts for the bow-tied and bespectacled senator and founder of the Paul Simon Public Policy Institute in Carbondale.

“I think he became almost a legend,” said Karl Maple, a staff member in Paul Simon’s Carbondale office in the mid-1970s. “And in some ways it’s grown over time.”

Paul Simon, a five-term U.S. Congressman and two-term U.S. Senator, spent 13 years as an Illinois state representative and senator. In 1969, he was elected lieutenant governor under Gov. Richard Ogilvie.

Ogilvie, a Republican, and Simon, a Democrat, were elected separately and made a uniquely bipartisan duo that isn’t possible under the existing law, according to “The Essential Paul Simon: Timeless Lessons for Today’s Politics,” a compilation of the senator’s writings edited by John Jackson, an SIU emeritus professor of political science.

This ability to work across the aisle followed Paul Simon throughout his career, Jackson said.

It’s also something his daughter said she tries to emulate in her own political endeavors.

“His ability to disagree with someone and still work with them is something I’d really like to bring back,” Sheila Simon said during a recent interview.

In a 1961 column for the Troy Tribune, a newspaper chain he owned from 1948 to 1966, then-state congressman Paul Simon talked about the importance of friendship among legislators.

“Bitter enemies have a hard time compromising,” he wrote. “Friends can.”

This, he added, is the only way to ensure important legislation gets passed.

To Paul Simon, education was a top priority. He advocated for adult literacy and foreign language instruction programs, making sure students with disabilities had fair access to public schools and federal financial aid for college students.

In the mid-1980s, he warned against President Ronald Reagan’s federal budget plan, which cut the total education spending by more than half — taking it from 4.8 percent of the budget in 1981 to 1.9 percent in 1985.

More than 30 years later, Sheila Simon is echoing that refrain.

The state senate candidate said federal assistance to college students needs to be a priority, and she advocates for free public higher education.

Still, as parents and children often do, the two Simons had their disagreements. A self-described pay-as-you-go Democrat, Paul Simon is frequently labeled a fiscal conservative.

This manifested in one of his better-known pieces of legislation, the Balanced Budget Amendment.

The amendment would have required a balanced federal budget unless two-thirds of Congress voted to declare an emergency that would justify a deficit, according to P.S. Washington, a column the then-U.S. congressman wrote in 1975.

It was never passed into law, but this was an “unusually courageous and prescient position for an officeholder who was essentially a liberal Democrat,” Jackson wrote in “The Essential Paul Simon.”

To Paul Simon’s daughter, this viewpoint went a little too far.

“This is one area where we always differed,” Sheila Simon said.

She said this bill would restrict the ability of the federal government to act in cases of national crises.

But another important thing the two Simons do share, Maple said, is an emphasis on integrity and transparency for political leaders.

Paul Simon pioneered the release of income tax returns for politicians, doing so from the very beginning of his political career in the Illinois General Assembly, Jackson said.

In a 1971 statement, the then-lieutenant governor wrote that this “lets the public make informed judgements about [his] motivation in dealing with the issues that come before [him].”

Sheila Simon has followed suit, making public her income tax information and a personal financial statement on her campaign website.

“We have some limited disclosure right now in Illinois and it’s really inadequate,” she said. “If there’s nothing to hide, it doesn’t hurt anything.”

Her dad was always a firm believer in political transparency, Sheila Simon said. This harkens back to his beginnings as an editor-publisher at the Troy Tribune.

“He was someone who was always asking the next question and wanting to get more information out to more people,” Sheila Simon said.

Following this vein, Paul Simon was a chief sponsor of the Open Meetings Act in Illinois.

In a Troy Tribune column from 1955, he wrote the bill would require all state, county and local government meetings to be open to the public.

“Democracy is built on the idea that if people have the information, they can and ultimately will make the right decision,” Paul Simon said.

Sheila Simon agrees with her father, and said today there is still room for more openness from governmental bodies.

“We have a system that says the government keeps records and if you ask the right questions you can get the record,” she said, referring to the Freedom of Information Act.

Her stance is all government records should be made public from the start, and only kept private in cases where sensitivity is required or personal information needs protection.

Although there are similarities and differences between Paul and Sheila Simon, it can be difficult to compare the two’s policy records, Maple said.

“Paul was more of a visionary, a big picture guy,” Maple said.

Sheila Simon’s campaign revolves around issues that are particular to southern Illinois, its economy and school system, he said.

Though the issues themselves may be different, Maple added, the underlying principles are the same.

“Advocating honesty, integrity, and education — that’s who the Simons are,” Maple said.