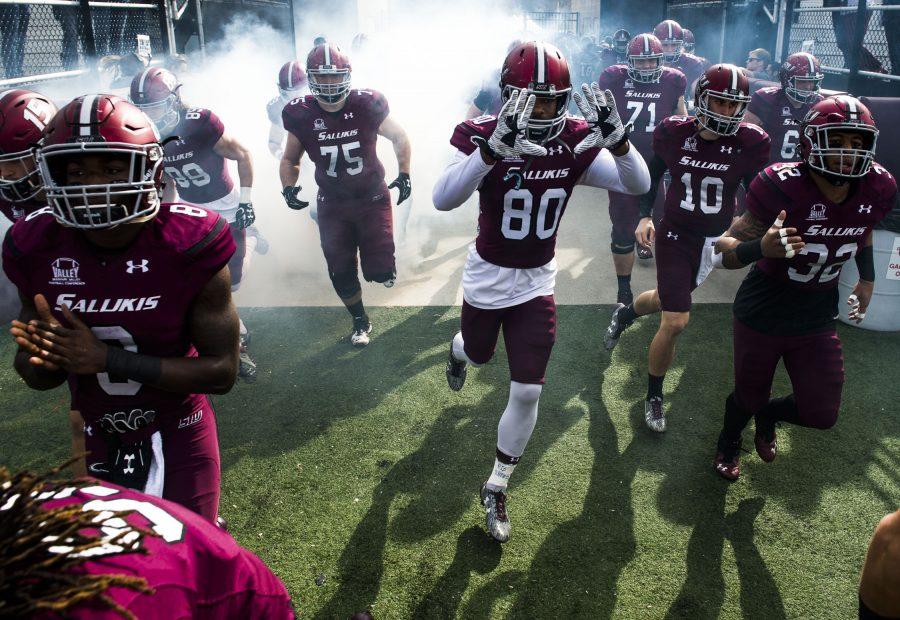 Players burst onto the field Saturday, Nov. 5, 2016, prior to the Salukis' 35-28 win against the University of South Dakota Coyotes at Saluki Stadium. (Ryan Michalesko | @photosbylesko)

For the second week in a row, SIU football has a 21-7 lead at halftime.

This was Reed’s first career start and first interception.

Sophomore quarterback Sam Straub started in place of senior Josh Straughan, who is not injured but sitting out because of a “coach’s decision,” said John Lock, an SIU associate sports information director.

Straub has completed 11 of his 18 pass attempts for 220 yards and a touchdown.

The Salukis would get on the board first as Straub threw a seven-yard pard pass to junior fullback Hans Carmien that put SIU up 7-0.

In the opening drive of the second quarter, South Dakota junior quarterback Chris Streveler threw a 57-yard pass to junior reciever Alonge Brooks for a touchdown that would tie the score.

Brooks has caught three catches for 74 yards and a touchdown.

Junior running back Cameron Walter’s two touchdowns in the second quarter would give the Salukis a 14-point cushion going into the half.

SIU could possibly be up by more, but Walter fumbled the ball at the five-yard line just before halftime.

Sophomore receiver Darrell James has continued to be a big-play threat for SIU with three catches for 92 yards.

SIU will receive the opening kick of the second half.