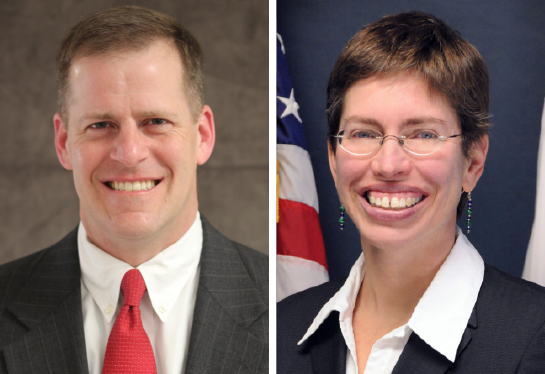 As voter attention is focused on the dramatic presidential election playing out on the national stage, candidates in state legislative elections fight to stay in the spotlight.

More than $4 million has been invested in four local House and Senate races. With the state budget’s fate remaining uncertain for the upcoming year, the future of Illinois will be decided by the legislators who take office in January.

The state economic climate has negatively impacted SIU in more ways than one.

Due in part to budget cuts resulting from a lack of state funding, SIU lost 246 full and part-time faculty members from fall 2006 to fall 2015, according to university data.

The data shows for the fall 2016 semester, enrollment hit its lowest point since 1964, which interim Chancellor Brad Colwell in September partially attributed to the state budget crisis.

Academic and non-academic programs face cuts and university data displays graduate assistantships have been reduced by 265 positions from spring 2016 to fall 2016.

In one state Senate race, retired Marine Paul Schimpf, a Republican from Waterloo, battles Democrat Sheila Simon of Carbondale for the District 58 seat left vacant by Republican Sen. David Luechtefeld. Simon, who served as lieutenant governor from 2011-2015, has been politically active since 2003 while Schimpf’s campaign claims Springfield lacks outsider perspective in the Legislature.

These are the questions:

What changes, if any, need to be made within your political party with regard to higher education and why?
After graduating high school, students leave Illinois at a higher rate than almost any other state in the country. From your perspective, what’s the biggest challenge for college students in Illinois and how do we correct this?
Why are you a better choice than your opponent?

1. The changes are something we need to make across both parties. Higher education is one of the most important investments in people and job development in our state and it needs funding. [Monetary Award Program] grants used to fund all the unmet need for students who had need and they don’t come anywhere close to that now. This needs to be a priority.

2. One of the biggest challenges is the budget that we’re asking students to make a four-year commitment to public higher education. The state can’t even come up with more than a six-month commitment. The interests don’t line up very well. I think if we make a commitment to funding higher education and funding it closer to the levels it used to be funded at, including MAP grants, then students will see they can go to [SIU] and have manageable debt and it’s a good investment in their careers. Then we can get students who are sticking around longer.

3. I have lots of life experience in southern Illinois. I know very well our biggest employer here, which is Southern Illinois University where I worked, and I have experience at both the local level of government on Carbondale City Council and with state government and experience knowing who across the state has what needs and how we can work together. Finally, I think I have a really good role model with my dad and knowing you can have disagreements with people and still work together. That’s something that’s been missing in Springfield and Washington right now and I’m anxious to help restore that.

1. We need to make sure higher education gets adequate funding. SIU is the largest employer in the 58th Senate district, so its health is vital to the wellbeing of the region. We can help the financial well being of the university by looking at some procurement reform measures. We need to spend more money on our higher education institutions, I look at that as an investment on our future. One of the key differences between my opponent and I is that I think the only way we’re ever going to have enough money to spend what is required is … to get our economy going again so job creators want to stay in Illinois. We aren’t going to be able to find enough money just by cutting other programs. We have to grow our economic base and increase our revenue stream through increased economic activity.

2. Part of the problem is getting our government in order so we can pay our MAP grants, that is part of the reason students no longer stay in Illinois. You can’t blame them for wanting to leave if they don’t have any confidence in the scholarships and grants that are being awarded. It really is something where the government of Illinois has let the state down, so we do need to get our economy going so students can have confidence in any tuition assistance.

3. We’re on different places on the political spectrum. I’m a better ideological fit for the values we have in the 58th Senate district. I’m talking about limited government, pro-Second Amendment, pro-life. I have the highest respect for my opponent and I consider her a friend but we’re just different in that way. The voters have an opportunity to decide whether to move forward and make our state more competitive or go back to the failed policies of the Quinn-Simon administration. We don’t have to guess about what my opponent’s political policies are. She and Quinn had complete control of the state government for a number of years when she was lieutenant governor and those policies of the Quinn-Simon administration, in my opinion, were devastating for Illinois and especially southern Illinois. I’m going to support common sense reforms that will move our state forward. Our political class is not capable of solving the problems they’ve created. My opponent and I have completely different background. She has spent her entire adult life in politics. I have not. I spent my adult life in the Marine Corps. I’m someone that has a background of solving problems, of working with people across the political and social spectrum. You cannot be successful in the military unless you can do that and I had a very successful military career. We need people who have successfully demonstrated leadership outside of the political realm.