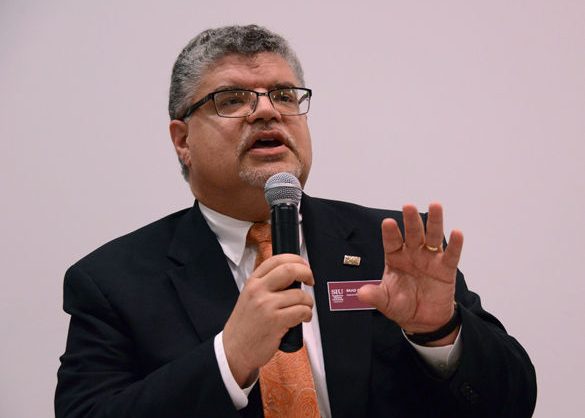 Interim Chancellor Brad Colwell addresses questions and comments of event attendees at the State of the Student Address on Oct. 28, 2015, in the John C. Guyon Auditorium. (Jacob Wiegand | @JacobWiegand_DE)

Interim Chancellor Brad Colwell met with the Graduate and Professional Student Council on Tuesday night to field their questions and talk about the future of the university.

One major discussion point was a possible increase in tuition and fees in the upcoming year. Colwell said one projection, which is based on the 10-day student enrollment for the fall 2016 semester, estimates a 0 to 3 percent increase in tuition for incoming students in 2017.

Some students’ fees could also increase, he said, but he promised to keep the total student fees at a zero sum — that is, any increases would be offset by equivalent decreases in other fee areas.

In a question and answer session, Donald Chamberlain, a graduate student in social work, asked if a tuition increase would affect the university’s decline in enrollment.

Though enrollment has been going down as tuition has gone up, Johnathan Flowers, GPSC vice president for student affairs, said there is no university data to show there is a causal relationship between the two factors.

Data from the Illinois Board of Higher Education shows SIU’s tuition increase rate from last year is actually in the median of public universities in Illinois, Colwell said.

Where the graduate school is concerned, Flowers said the enrollment decrease has more to do with the attrition of faculty and the loss of assistantships available.

SIU will never return to the days of having 25,000 students enrolled because four-year institutions are no longer allowed to offer two-year degree programs, Colwell said. A more realistic “sweet spot,” he said, could be somewhere around 18,000 students.

But the chancellor emphasized everything depends on whether or not the university is dealing with a more stable state budget next year. Otherwise, prospective students are unlikely to want to enroll at Illinois universities.

Flowers called attention to the fact that in the spring, Colwell released 75 percent of the budget for the fiscal year to department deans without giving them any guidance regarding how to spend the money. He asked if Colwell had ever gone back and checked with the deans about how they distributed those funds.

Colwell said he has not reviewed the deans’ decisions, but the release was based on a need for deans to know how much money they would have for the upcoming year in order to pass out assistantships.

Later, Flowers said this lack of guidance resulted in “inconsistent offers of graduate assistantships across the board.”

Colwell’s failure to follow up with the deans means the administration doesn’t know what happened in those departments and deans have been “left to fend for themselves,” Flowers said.