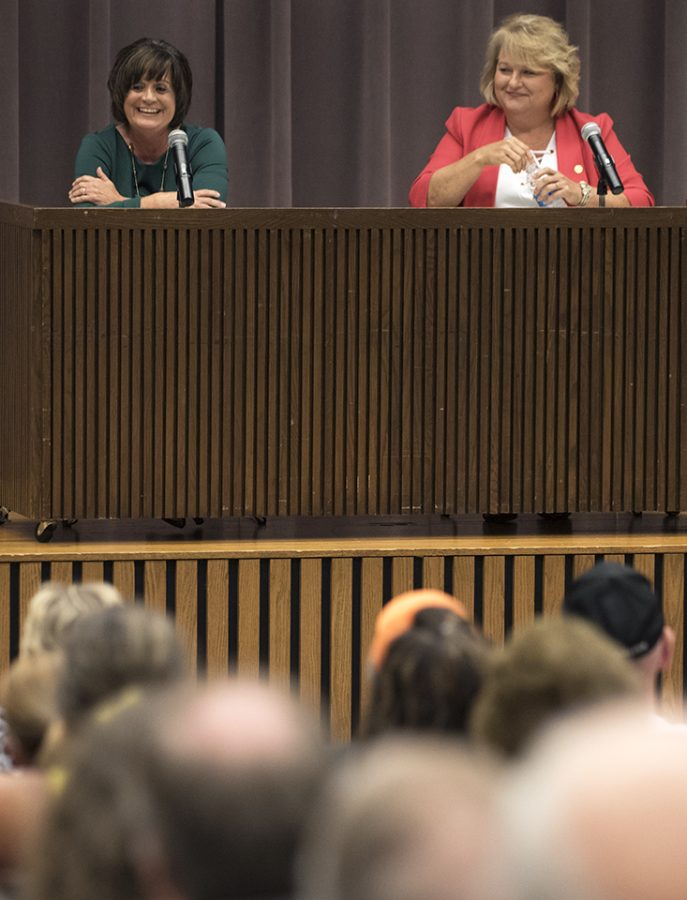 As voter attention is focused on the dramatic presidential election playing out on the national stage, candidates in state legislative elections fight to stay in the spotlight.

More than $4 million has been invested in four local House and Senate races. With the state budget’s fate remaining uncertain for the upcoming year, the future of Illinois will be decided by the legislators who take office in January.

The state economic climate has negatively impacted SIU in more ways than one.

Due in part to budget cuts resulting from a lack of state funding, SIU lost 246 full and part-time faculty members from fall 2006 to fall 2015, according to university data.

The data shows for the fall 2016 semester, enrollment hit its lowest point since 1964, which interim Chancellor Brad Colwell in September partially attributed to the state budget crisis.

Academic and non-academic programs face cuts and university data displays graduate assistantships have been reduced by 265 positions from spring 2016 to fall 2016.

In House District 115, Democrat Marsha Griffin of Jonesboro faces off against incumbent Rep. Terri Bryant, R-Murphysboro. Fourth-grade teacher Griffin’s campaign regularly tells voters to “send a teacher to Springfield, not a politician,” while Bryant cites her experience in the Legislature as an advantage.

These are the questions:

What changes, if any, need to be made within your political party with regard to higher education and why?
After graduating high school, students leave Illinois at a higher rate than almost any other state in the country. From your perspective, what’s the biggest challenge for college students in Illinois and how do we correct this?
Why are you a better choice than your opponent?

1. One thing that is true of either party is that in the last year, politicians in Springfield have cut the higher education budget funding budget by over 68 percent. These cuts have directly impacted the communities here in southern Illinois. They’ve impacted faculty and students and as an educator I’m appalled that SIU has experienced the lowest drop in enrollment it has had since 1965. I believe that’s because of the partisanship in Springfield. Schools should receive 100 percent of their state aid. These stopgap budgets are short term solutions.

One thing we could do to get more funding for higher education would be to put a tax on millionaires and billionaires of 3 percent and earmark those funds for education. I believe that middle class families can’t afford another hit to their pocketbooks, so we could put that obligation on those who can afford it. We can cut corporate tax loopholes and make higher education the priority it should be in Illinois.

I want to be the strongest voice possible for education and fight for more equitable education. I think it’s a travesty that students in southern Illinois don’t have access to resources and right now their access is determined by their zip code. Students in southern Illinois are no less worthy than students born in more affluent areas of the state. I’ve taught out of a social studies textbook that’s 17 years old. Our children are no less worthy, and K-12 all the way through higher education needs full funding.

2. The problem is opportunity. To attract industry and jobs to southern Illinois, first and foremost, it all comes down to a lack of a budget. Who wants to come to Illinois when we don’t have a budget in place? It’s hard to attract when you turn on the news and you hear that Illinois has a stopgap budget coming to an end in January. We have to get stability in our state and come up with a real budget.

3. I tried to make a difference in my region long before I became a candidate. When facilities were closed in southern Illinois by Gov. Quinn, I established a faith based group called My Brother’s Keeper and called the governor out in every media outlet in southern Illinois and launched petition drives and lobbied lawmakers. I have the necessary tenacity to make tough decisions and I can be an independent voice to move our state forward.

1. No matter what party it is, higher education needs to be funded. However, we have to make sure that when we make a promise to anyone, whether it’s higher education or social services or secondary education, that whatever promise we make we actually have the revenue to meet that promise. In the past, promises have been made to higher education and then they don’t get that funding. We need to be honest and truthful with the revenues that we have to work with and fund accordingly.

2. If it’s for public universities, one of the biggest problems has been the instability in funding. From one fiscal year to the next, a lot of the public universities don’t know how much they have to work with. The challenge is you have to be able to fulfill the promises made to those schools. When the school doesn’t get the funding they need, you have professors, you have grant recipients who begin to look to other universities where there’s more stability. When a student is looking at a particular university, they’re looking for a particular program. If there’s not stability for that program, they’re going to go to a school that has that stability. The challenge is to make sure that the programs students are looking for are not only available but funded adequately.

I’m hoping, as we go back to the Legislature, we’re going to be looking at a full year’s budget. If we are looking at a full year’s budget, a part of that budget should be full funding for universities. Most of the university presidents that I’ve talked to don’t talk as much about what the dollar amount or percentage amount is. Their conversation always goes toward ‘I have to know what I’m going to get and that whatever is promised I’ll actually get.’ The answer is to have a full budget in place so everyone knows how to plan their budgets going forward.

3. I am a former small business owner, a former state employee, and I have been one of the most successful freshmen in the legislature in my first term. I have a track record of accomplishing what is seemingly impossible when you’re sitting in a super minority. I’ve been able to work across the aisle to get legislation that was needed completed and signed into law. I think certainly my experience both outside the legislature and my experience in the first term indicate that I’m the better candidate. One more thing that distinguishes us is I will never vote for Mike Madigan for Speaker of the House.