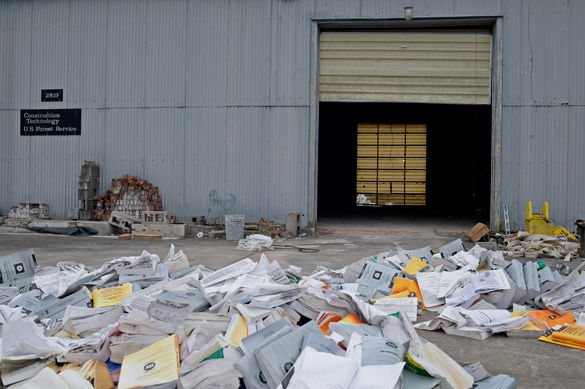 After serving the College of Applied Sciences and Arts for more than 45 years, nearly a dozen decommissioned SIU buildings in Carterville are scheduled for demolition this year.

Several of the buildings on the original 1960s campus have already been destroyed. The remaining structures, comprising the former home of the automotive program, will come down by August, said Phil Gatton, director of Plant and Service Operations.

He said the buildings, located just south of Route 13 and west of Route 148, are in various stages of demolition, asbestos removal and clearance of debris.

Two separate contractors are involved in the process—general contractor Fager-McGee, of Murphysboro, and asbestos contractor General Waste, of Alton.

The entire project will cost about $1.6 million, Gatton said. Student fees will not pay for these processes.

The money for abatement and destruction is provided by the Illinois Capital Development Board, said Kevin Bame, vice chancellor for administrative finance. The board oversees construction management for the state’s properties.

The only building that will stand after demolition will be the Coal Research Center, said Mike Behrmann, chairman of Applied Sciences and Arts’ automotive program.

He said the center is housed in the first permanent structure built on the Carterville campus, where research will continue.

Behrmann said most of the buildings on the Carterville campus are temporary structures. He said they greatly outlived their life expectancy and projected usefulness.

The buildings were erected as temporary military structures in 1938 and 1939, Behrmann said. The base was decommissioned after World War II, and the university acquired the land and structures for its Vocational Technical Institute, which later became the College of Applied Sciences and Arts.

“With soldiers coming back from the war, the university saw a need to provide training to allow people to get jobs,” Behrmann said. “So the university started providing associate degrees.”

Training included everything from electronics, to automotive technology and construction, Behrmann said.

Behrmannn said some fields of study were moved to the Carbondale campus or transferred to John A. Logan College, but the automotive program grew and thrived in the structures.

He said the buildings’ dilapidated condition contributed to the growth of a disciplined culture among all involved in the automotive program.

“We learned to survive, learned to work hard, learned to have everybody pulling together,” Behrmann said. “The students, the faculty, the staff had to pull together because we were all dependent upon working together to achieve our goals.”

Behrmann said this mentality is still passed on to younger students despite the automotive program’s new facilities at the Transportation Education Center at Southern Illinois Airport.

Although the program’s square footage was cut by a third when it moved to the transportation center, the quality of the new facilities creates a unique learning experience for automotive students, said Andy Ju An Wang, dean of the College of Applied Sciences and Arts.

The only visual evidence on the Carterville campus was negative—aging buildings not built to survive the 20th century.

Behrmann said when the old buildings were in use, potential students were asked to look past the conditions of the temporary buildings and focus on the quality of instruction students received.

Conditions were so bad repairs have been kept to a minimum in recent years, Gatton said. Other than occasional roof and air conditioning repairs and alterations made to maintain American Disability Act standards, as little money as possible has been put into maintenance of the Carterville campus, he said.

“Every time we put money in there, we were very cautious about recognizing that they were considered to be temporary structures,” Gatton said.

He said the site will be cleared for further development, but plans for the land are not clear.

Jonathan Swartz can be reached at [email protected]