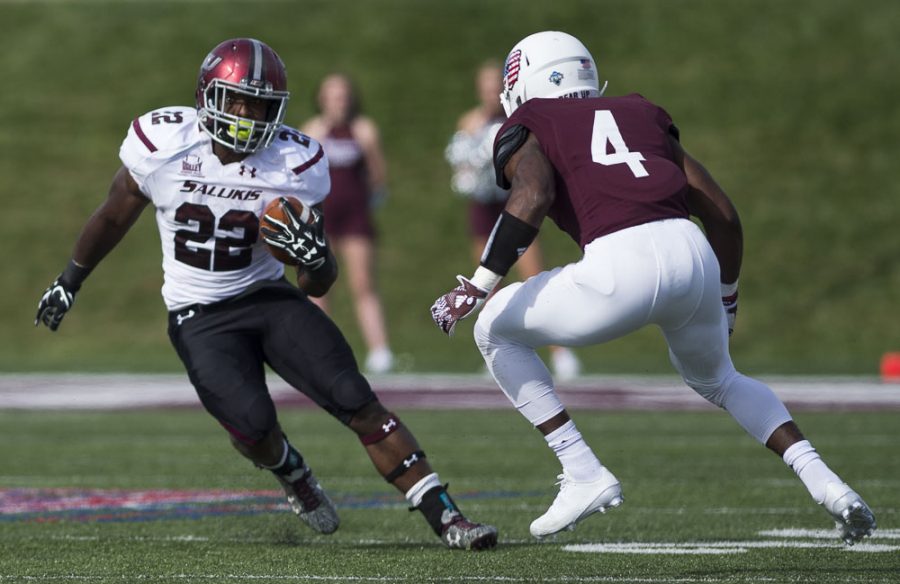 SIU was once again unable to secure a Missouri Valley Football Conference victory, but in a much different fashion this time.

Missouri State came back Saturday from multiple 14-point leads to stun the Salukis, 38-35. It was SIU’s fifth loss in a row.

Bears redshirt freshman kicker Zach Drake hit a 32-yard field goal with 10 seconds left in the game, which would end up being the game winner.

It was a tale of two halves for SIU. After allowing only 178 total yards of offense in the first half, the Salukis allowed 338 yards in the second.

“It’s been lacking all year,” SIU coach Nick Hill said of his team’s ability to close out games. “It’s happened all year long. We’ve had opportunities. Every single game we’ve lost this year has been one-possession games. We’ve been lacking that knockout punch.”

“We just needed to make more plays down the stretch,” Hill said. “Twenty-eight points [on offense] just isn’t good enough. We just have to get better as an offense and get more relaxed.”

SIU tallied just 146 yards of offense in the second half.

The Dawgs were once again without sophomore running back Daquan Isom because of an injury and were only able to muster 112 yards of rushing offense in his absence.

Senior linebacker Chase Allen, an All-MVFC preseason selection, was also held out because of a knee injury. Hill said he should be good to go for next week.

Senior quarterback Josh Straughan completed 29 of 39 passes for 315 yards and two touchdowns. It was his second 300-yard game this season.

“We just have to execute,” Straughan said. “That’s been the story on us all season. We’ve been up in games and then just can’t seem to step up enough.”

After holding a 21-7 halftime lead, the Salukis were able to keep the Bears at bay through the third quarter thanks to a pick-six by junior cornerback Craig James.

The Salukis won the turnover battle with three interceptions while not turning the ball over.

“I thought we did a good job as a defense,” sophomore safety Jefferson Vea said. “We just have to start finding a way to win. That’s what it comes down to.”

Missouri State stormed back in the fourth quarter as junior wide receiver Deion Holliman returned a bouncing punt 57 yards for a touchdown to tie the game at 28.

“He got it in the middle of the field and our coverage team wasn’t down there yet,” Hill said. “He just had way too much room.”

SIU regained the lead later in the fourth after senior wide receiver Israel Lamprakes broke a tackle to run 54 yards for a touchdown.

Bears junior wide receiver Zac Hoover then reeled in a one-handed touchdown with under four minutes to play to tie the game and set the scene for Drake’s game-winning kick.

The Dawgs are now on a five-game losing streak. Hill said the team has to stay the course for the final three games of the season.

SIU will have its next chance to earn a conference win at 2 p.m. Nov. 5 against South Dakota at Saluki Stadium.